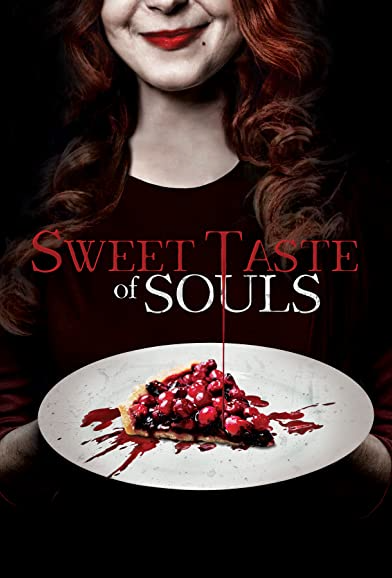 Sweet Taste of Souls is an indie horror that had a premise that really interested me, even if, quite bizarrely it was a premise I had already seen in action, in last years Art of the Dead. This was directed by Terry Ross (R.I.P), with a story written by F. Scott Mudgett.

Four members of a small time band are on a road trip to attend a gig they hope will make their careers. They are comprised of Nate (John Salandria - Club Dead), his best friend Kyle (Mark Valeriano - Zombie), Kyle's girlfriend Wendy (Amber Gaston - Mermaid Down), and Lily (Sarah J. Bartholomew - voice work on the Life is Strange 2 video game). The foursome stop off at a roadside cafe where they catch the eye of the eccentric owner, Ellinore (Honey Lauren - Bram Stoker's Dracula), and unknown to the group she hides a terrible power. She is able to somehow turn people into living photographs, who are then displayed on the walls of her cafe as part of a twisted art collection, and she does this with the band. While they try to find a way to escape their timeless imprisonment, the discovery of their abandoned car leads to a man, whose daughter went missing in similar circumstances some years previously, to restart his investigation.

I love the idea of people being trapped inside a photograph, and reminded me to a similar event in Art of the Dead in which characters get trapped in paintings. I was interested to see how this would play out, and if it would be as cheesy as it sounded. The photos characters get trapped in are minimalistic white backgrounds, with props to fill up the space. Within the film these photos are soundproof, and inescapable, aside from having the photo window smashed, with the characters frozen in place whenever a person enters the cafe. There are feelings of Black Mirror at times with how long some of the people have been trapped, one couple indicate they had been there for 20 years! With Ellinore often interacting with the photo frames I thought they might do some sort of effect to show the perspective from the protagonists viewpoint, but this never happens. You get reaction shots of the group shouting at her, then shots of her looking at the photo frame, but never a mixing of the two. This felt very indie, which can best be seen with the cheesy looking way characters fade from the screen when they are initially captured, it's all charmingly cheesy though.

At around 1 hour 40 minutes I have to say it did begin to drag towards the end, I felt a more streamlined story would have benefitted, as cool as it was to have people trapped in a photo it does mean that not much seemed to happen. The first act was decent enough, and the third act certainly got events moving, but the middle part meandered along more than it needed to. The acting was never what I would call stunning, I guess it is hard to really sell the idea of being trapped in a white box effectively, and the four main characters are hardly a likeable bunch, what with Kyles constant anger, Lily's constant negativity, and the other two often just as miserable. Ellinore was a bit irritating as a character, even revealing her sad past via a flashback made it hard to see her as anything other than an other the top witch type person. The reveal about the secret behind her powers was interesting though, including a lovely looking moment of a humanoid made out of paint who appears.

There were not many practical effects, often things would happen just off screen, or by editing. Mostly it is all shown via digital effects. The concept meant that even without showing much things could feel a bit gnarly. Being photos Ellinore can feed victims into her paper shredder, complete with characters screaming as they are shredded! Due to this there is a large body count, and some bleak moments that belied the potentially harmless method of imprisonment, it felt a bit needlessly bleak at times.

Sweet Taste of Souls is unique for the most part, it sells a weird concept despite the very indie feel to this. It was a bit overlong for me, and I found my interest waning a bit towards the middle, but regardless this was certainly something different and as such I think it will stick around in the mind for a bit. Sweet Taste of Souls is due for release on VOD on 1st November, thanks to DarkCoast.

Posted by Daniel Simmonds at 12:31