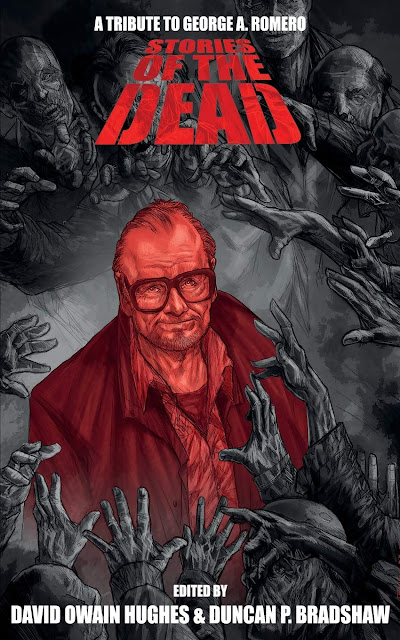 Stories of the Dead is a zombie anthology with a difference. The book was created as a tribute to the late great George A. Romero and so each of the eighteen stories contained within it have their undead based on the style of walking dead he created. In fact eight of these are directly linked to some of the films that Romero put out. This collection was edited by David Owain Hughes and Duncan P. Bradshaw (Class Three) and they both have stories featured here.

The anthology can be neatly split into two styles. Those which directly take their influences from the films, featuring the same locations and characters, and those who take Romero's world of the walking dead and create their own unique stories. As much as I love Romero it is only The Night of the Living Dead, Dawn of the Dead, and Day of the Dead films from his zombie series that I enjoy. Diary of the Dead and Survival of the Dead were both forgettable, while Land of the Dead was so terrible that I found myself going to watch it twice at the cinema. I just couldn't believe how bad it was, and so had to see it a second time to make sure that I wasn't the problem. Thankfully then it is only Romero's first three zombie films that have stories dedicated to them here.

It starts off with Dan Howarth's Grounded that takes place in a NASA control room and shows a possible catalyst for the zombie plague. Aside from the bizarrely quick way this 'space radiation' manages to get about the place this was a classic zombie story featuring plenty of trapped survivors battling a force they don't understand.
Beekman's Diner by Jeff C. Stevenson is where I saw the potential for this anthology. It slowly dawned (of the dead) on me while reading this that it serves as a prequel to Night. Harry, Karen, and Helen are at a diner when the zombie plague reaches them, they of course being the doomed family who are found hiding out in the basement in Night. This, as with many other stories all felt like fan fiction, but that is of course because they are fan fiction, but written by competent authors.
Mama by Nikki Tanner still takes place during the events of Night, but with a different farmhouse, and seemingly (by the upbeat conclusion) a different reality to that of the films. Here abuse, both sexual and physical is explored, being a bit of social commentary into proceedings as was standard with Romero.
The Last Scare of Johnny Blair is Nathan Robinson's contribution to the anthology and as the title suggests is all about Barbara's ghoulish brother, Johnny. It was fun to see a possibility of what he was up to during the events of Night (the remake seemingly).
The final story based around the first movie is Collateral Damage by Anthony Watson. In this one a posse member discovers his dark but truthful calling in life.

On next to the shorts that use Dawn of the Dead as inspiration. This begins with Duncan P. Bradshaw's WGON TV: Off Air. This was a good one as it is a story about what happened to the news studio after the characters leave it right at the start of Dawn. It was something I had never thought about before, and due to featuring such unexplored characters, as far as I am concerned this is now canon.
Fuel by Jason Whittle was a good story, but I was determined to wipe it from my mind after reading. Dawn ends fantastically, I didn't feel the need to explore what happened to the survivors, but I will admit I could totally see this play out in my mind.

After a poem from Rachel Nussbaum (Not Anymore) it is onto the part of the book I was most looking forward to, the stories that use the almighty Day of the Dead as inspiration. Safe Zone of the Dead is David Owain Hughes entry and serves as a prelude to the film. I was back in the world of the movie reading this, I could picture the actors reprising their roles. It helps the story is over the top violent, just like the film itself was.
Last of the Day by Chad A. Clark was a special one for me. It follows a soldier from the bunker of Day who was so inconsequential that he managed to survive the massacre there. I just loved the idea of some random soldier, just doing his thing and not causing trouble for anyone, hanging around in the background of scenes. If I was in the apocalypse that would be me, made me chuckle thinking of him just doing his own thing while all the craziness of Day is going on. It also smartly bridges the gap between that film and Land of the Dead.

The rest of the book is made-up of stories unrelated to the films, but using the idea of slow moving, unintelligent ghouls. After Us by Emma Dehaney takes place in a flooded New Orleans with a group of survivors of the flood unaware about the zombie threat. This one was not only a good story, but it felt different to everything else in this anthology.
Tony Earnshaw's A&E is a very simple, yet also very fun outbreak story, from the perspective of a haplass paramedic team. James Jobling's Once Bitten, Twice Die was another neat one, I love how chaotic this gets, gave me a The Crazies vibe. On paper Who They Were by Rich Hawkins was similar, and it had an interesting format, taking place both in present day with a man dealing with his zombie mum and dad, as well as in the past, showing how they came to be zombies. Despite the nice format I thought the plot was a bit too downbeat and uneventful for me.
Hopelessly Devoted is Kelly Gould's offering and was another book where I felt some sympathy for the protagonist. A girl, hopelessly in love with her scummy boyfriend ends up holding up in a hotel room with him, as their relationship implodes inside, and outside so does the world. This was a good story, but I feel it wasn't really needed to make the girls boyfriend unfaithful as you could tell all was not well without including a tired cliche like that.
The third from final short is Dead Harbor by Patrick Loveland, a classic zombie slaying story that felt like that level in the video game World War Z (in which you have to battle through a cruise ship) put onto paper, great stuff. Finally are the duel comedic stories of Eternity (Thomas Vaughn) and Roll Credits by Kenneth E.Olson. The former sees an old man pick the most inopportune moment to finally try and murder his irritating wife, the later has vibes of One Cut of the Dead with a crazed filmmaker out to make his magnus opus against a backdrop of the rotting world.

Stories of the Dead was a good collection of zombie stories, and all which prove just how much impact Romero had on the world of horror. Zombies would not be the same without him, and this book is just one little example of his influence. A nice touch here was each of the authors including a few paragraphs after their stories to explain how they first came to know about Romero's films. If you're a fan of his work (and let's face it, who isn't?) then this anthology is well worth checking out.

Posted by Daniel Simmonds at 08:09