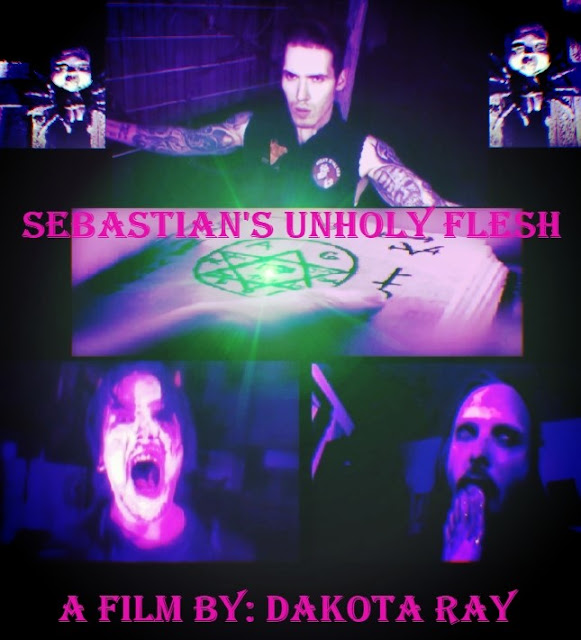 Sebastian's Unholy Flesh is the seventh film from Denver based filmmaker Dakota Ray (The Dark Days of Demetrius, American Antichrist) and in terms of content it is his most demonically charged one yet. There has been supernatural elements in many of his previous films, but with this one the whole film takes on a hellish tone that makes this the most experimental in feel yet.

Ray stars as the titular Sebastian, a demon in human form who is on a mission to get control of Lucifer's ancient unholy book. Anyone who has this in their possession has the power to bring about the destruction of mankind. The book had been hidden away for countless years, its re-emergence sees not only Sebastian, but also other dark beings out to get it for themselves. 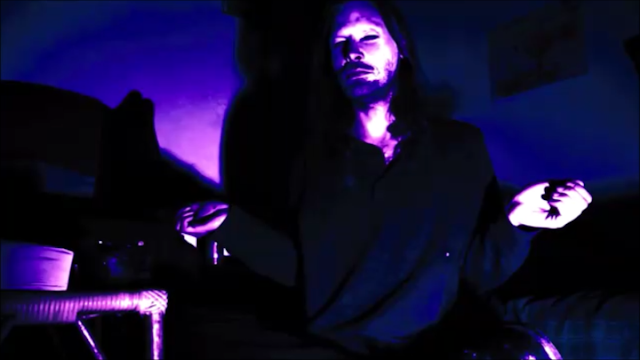 This manages to have the most world changing plot yet, but at the same time tell this story in such an abstract way that it is often happy to let this plot fade into the background as the camera just soaks in the nasty atmosphere of the various locations. The entire film has had a purple tint applied over it making everything seem otherworldly. Ray's films have always felt like they take place in a meaner reality where life is dirt cheap, here that feel is even more intense. If it were not for the plot of trying to bring about the end of life on Earth I could easily accept that the whole movie took place in literal Hell.  All of the film takes on a dark feel due to the purple tint that drowns everything.

Often the format of Ray's films will be several different storylines taking place over each other, and that is almost the case here. In addition to Ray there are a few other familiar returning faces. These include Fred Epstein (The Dark Days of Demetrius, The Acid Sorcerer) as the soul eating serial killer The White Spider, and Nick Benning (American Antichrist, The Acid Sorcerer) in a scene stealing role as the demon Nezaah. The look of this character, and the distortion used on his voice made him a great addition to the dark world of the movie. Due to the experimental design this at times can became a little bit hard to follow, yet throughout the tone is very consistent, and it never lost the unique mean spirited atmosphere even with the reduced reliance on dialogue. 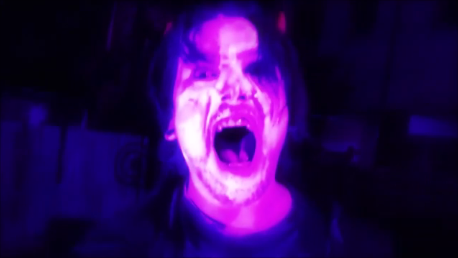 Sebastian's Unholy Flesh is not really a film that is that easy to write about, first and foremost it's an experience, and you need to let it wash over you. It may be light on actual story telling but this is Ray's most unified feeling film yet, it seemed like there wasn't a single shot here that felt unneeded. At times the feel can be exhausting, but it creates an atmosphere through direction, editing, sound design and images that not many films, especially indie ones can achieve. Sebastian's Unholy Flesh was released on DVD on October 24th, and can be purchased here.

Posted by Daniel Simmonds at 16:16