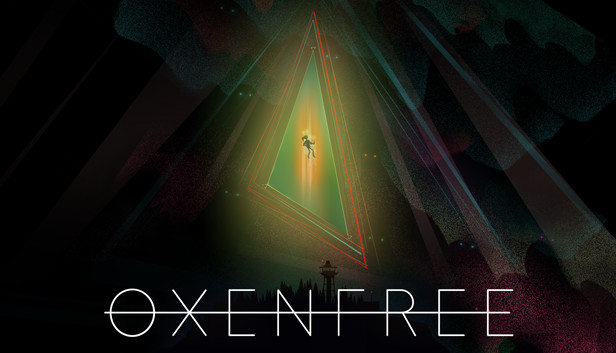 Oxenfree is a combat free adventure game that is heavy on story but short on gameplay. It feels kind of like what modern day text adventure games have become. While personally I didn't feel the need to do a second playthrough, the story is set up in such a way that you would need to do so in order to get a true ending.

Alex (voiced by Erin Yvette - Firewatch) heads to the currently uninhabited Edwards Island along with her best friend, Ren (Aaron Kuban), and her new step-brother Jonas (Gavin Hammon) for a weekend of partying, as is the coming of age tradition of teenagers in her town. There she meets Clarissa and Nona, two other school mates. There is a local legend that certain radio frequencies cause supernatural events in a large cave on the island and so Alex and Jonas decide to check it out. They discover a strange 'tear' deep in the cavern and are surprised when tuning the portable radio Alex has that this tear begins to open...then all chaos breaks loose. Some time later Alex and Jonas awaken to find themselves somehow transported to the opposite side of the island. Lost and confused they eventually learn that all their friends have also been transported to random places within the island. It seems they have somehow awakened a living frequency, a force whose intentions are unclear, but which has the power to not only create time loops, but to also be able to possess Alex and her friends. 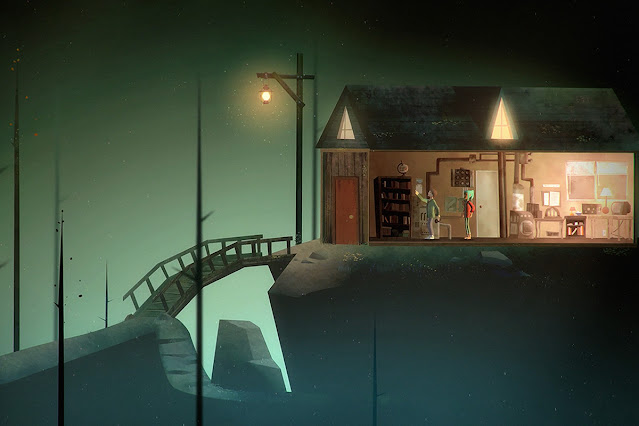 Oxenfree is a beautiful looking 2D adventure game that features vaguely ugly 3D character models. It is both the graphics and the superb soundtrack that really got me hooked. The island is split up into different areas, such as the beach, the military base and the mountains, each of which has a lovely look to it that made it seem like it had been hand built via arts and crafts. In each area you are restricted to a 2.5D path. Occasionally there are minor puzzles, such as working out how to open locked doors, and how to power on various devices, but mainly this is all about walking and talking. Over the course of the roughly five hour game you play as Alex, but often who you are with changes up. Dialogue is the main way the story plays out, with characters walking and talking constantly. Usually you are often given multiple responses to what the other characters are saying, typically agreeable, disagreeable or sarcastic and angry responses. In terms of what you actually do this is mostly just walking around, with the story playing the main draw.

The five main characters are wonderfully voiced, though some of the characters I really couldn't stand. My biggest problem was with the selfish and irritating stoner Ren. I hated the sound of his voice and his attitude of always having to be right annoyed. Thankfully you have plenty of opportunity to be nasty to the characters you talk with. The game remembers how you treat characters which was a nice touch. At one point during my playthrough Ren questioned why I had been so mean to him during the trip, a nice surprise showing the game was paying attention to my dialogue decisions. The mystery of exactly what is happening is what kept my attention, and while it was interesting, this is lite-horror, not designed to be scary. On occasion it does get creepy I will give it that. At set points in the progression of the story you enter time loops, with the game screen taking on the appearances of a warped VHS tape with the outer edges of the vertical screen getting distorted. The time loop moments were when Oxenfree was at its most eerie, as were the moments when characters are possessed and begin to behave very weirdly. Despite characters sometimes appearing dead there is no real danger to Alex and her friends, I understand why the horror was not more pronounced but it did sometimes lead to the feel that this was all bark and no bite. Having such a sweet look mixed with a sometimes dark story led to a nice juxtaposition. 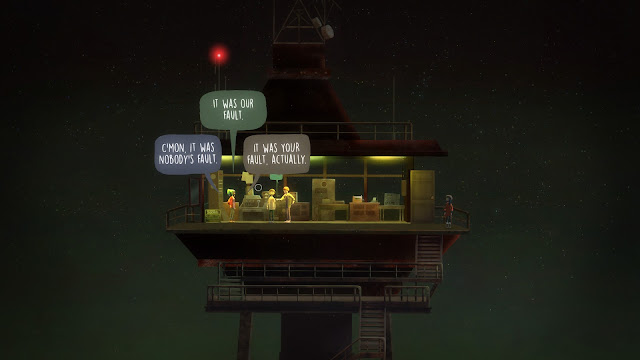 You may not be ever doing much more than walking and choosing dialogue options but this was still an engaging game. With an attractive art style and a great soundtrack Oxenfree was a joy to play, even with a story that wasn't as interesting overall as I had hoped it to be.

Posted by Daniel Simmonds at 15:31