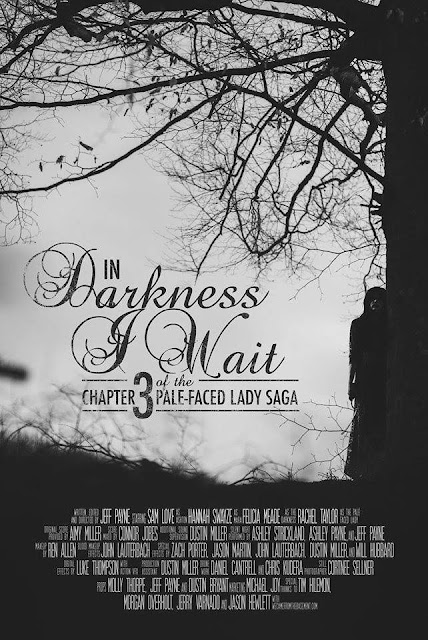 It began with The Pale Faced Lady, a 10 minute short horror film that released towards the start of 2019. This introduced the titular ghostly woman, though the story wasn't so much about her as about a girl whose journey took her to the house it haunts. Towards the end of last year came She Will Return which focussed on the origins of the ghost, and now chapter 3, In Darkness I Wait has released which could possibly be the last in the series.

Ashton (Sam Love) and his girlfriend, Mara (Hannah Swayze) have headed to the dilapidated house of horrors which the pale faced lady (Rachel Taylor) haunts, with a singular goal in mind. The place holds bad memories for Ashton, as it was the home of his abusive uncle. He intends to burn it down to the ground, little realising the untold dangers he has put himself and Mara in. The pale faced lady is never keen on letting visitors leave...

Each film in the series has been better than the last and that is the case here. It helps that there is a bit more of a logically paced story this time around. It builds upon what has come before, and it plays to the strengths of the previous films. Paradoxically the pale faced lady is at her very best when she is doing nothing at all, merely appearing on camera in her fixed stance, just staring, this creates genuine chills. At many points during this there are moments that seem to be set-up to give jump scares, but thankfully that cheap way of making thrills is never utilised. It was strange to think, but I was mostly reminded of the opening prologue of Resident Evil 7: Biohazard while watching this, both with the modest size of the building, but also with elements such as the mannequins that move around off camera.

This was again written, directed, and edited by Jeff Payne and as ever the editing in particular is very strong. I felt that there was one sequence with the character of Mara that felt a little fabricated to create scares rather than feel natural, but for the most part this flowed really well. I liked that the character of Ashton seemed to be a bit of a klutz, and I thought his particular journey was great. It leads to an ending that I adored, I re-watched the final shot of the film itself multiple times to just appreciate the amazing cinematography of that scene. The end credits repeat the idea of She Will Return by showing clips from the short to reveal the pale lady hiding in plain sight during several scenes, a nice touch.

This saga has improved with each entry, and there has been restraint in not bombarding the viewer with the ghost, but instead dripping it throughout, giving it a presence that feels far more Japanese in style than American. As fun as the story is, it is the set design, the lighting, and editing that has always been the star of these films, almost worth watching just for that alone. In Darkness I Wait made its world premiere on September 24th and can be seen on YouTube.