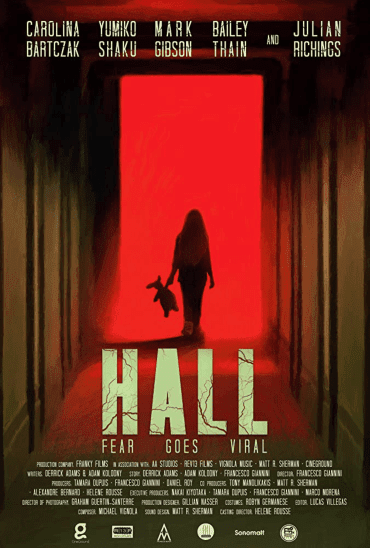 Hall (directed and co-written by Francesco Giannini) had its world premiere at Frightfest this year, and has been selected at the Blood and the Snow Film Festival 2020. This is a film that grabbed me from the very start, the story is like a jigsaw, with additional pieces revealed to the viewer as it plays out. It also does that  thing that I like so much in movies, starting in the present and then switching back to the past to show how events unfolded.

Naomi (Ymiko Shaku - the voice of Aya Brea in the Parasite Eve II video game) is sat slumped against a wall in a hotel hallway, gasping for air, infected with some type of horrific disease, as are many others in the hallway. Rewind to four hours earlier in the day and Val (Carolina Bartczak - X-Men: Apocalypse), her husband, Branden (Mark Gibson - Exit Humanity), and their daughter, Kelly (Bailey Thain - Pet Sematary) arrive at the hotel as part of their road trip. Kelly plans to leave her abusive husband, but is just waiting for the right time to do so. 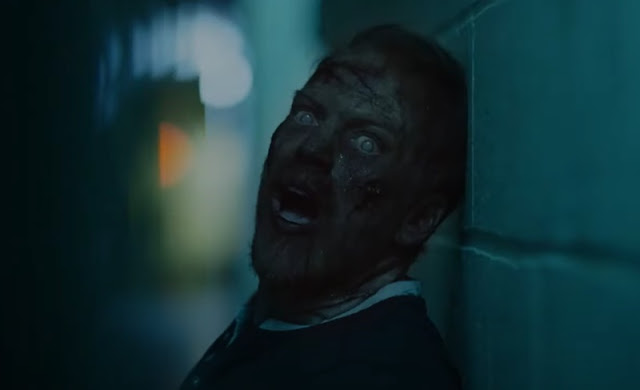 Hall spends the first two acts cleverly jumping back and forth between the two time periods. The majority of the present is spent with an obviously extremely sick Naomi as she slowly crawls down the titular hallway. As she journeys you slowly get shown what has become of the other guests. The part of the movie that takes place four hours previously mainly focuses on Val and her family. You get a real sense of what the family is going through, thanks to Bartczak and Gibson who bring their characters to life by the subtle ways they act around each other. It is very obvious all is not right with their relationship, but the way they slip in and out of their personas, depending on if their daughter is around or not was something quite special. I'm not usually keen on precocious children in films, I find it offputting, yet the character of Kelly just works. Thain brings with her a mature performance that works when you consider that the character herself would have picked up on the tense signals that both parents are shown to be trying to hide from her.
It would have been nice to get more time spent with the character of Naomi, despite her big presence in the present sections she only gets a few scenes before that. It is enough to know that she has fled an abusive relationship, which makes her into somewhat of a mirror image for Val. Hall does not have a good view of men, the key male characters are all bad people (including Julian Richings (Blood Hunters, Septic Man), with the female characters shown to be victims, yet also shown to be survivors, whether literally or figuratively. It was interesting to see how the side characters exist outside of the main characters, while occasionally they interact there storylines are mainly completely separate.

Sharing such parallels with real world events was coincidental, but with the story taking place against the backdrop of an airborne viral pandemic this horror felt very much of the time. I was sat there thinking that as awful as this real life pandemic is, at least it wasn't at Hall standards. The victims have fantastic looking makeup effects on their skin, thick veins showing, and various stages of eye deterioration. To begin with showing red around the pupil, then later on they took on a more milky look. The victims sell this disease well, almost zombie like moans and groans, and every act of physical exertion painful looking. There are a few moments that call for special effects and they always looked good. With so much happening in such a short time frame this can still  sometimes feel a little slow. Val's search for her daughter at one point seemed to stretch out for far longer than it needed to be. 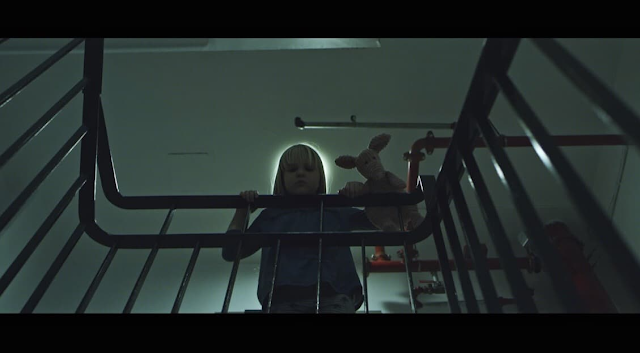 I avoided reading or watching anything about Hall before sitting down to watch it. I was so uninformed that I initially thought it was a short horror, and not a feature length one. I'm glad I went in blind as I was left constantly wondering what was going to occur next, and eager to find out what would be the fate of the main cast when four hours into the future came to pass. Hall will play twice at the Blood in the Snow Film Festival that runs from October 28th to November 7th 2020 on the Super Channel Fuse channel. This channel is free to any Super Channel subscriber and geo-blocked in Canada.