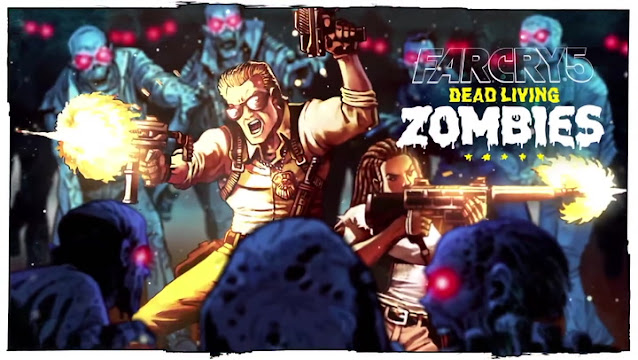 I am a fan of the Far Cry series of action video games and have been slowly working my way through them over the past couple of years. Personally I think that Far Cry 5 was the best game in the series so far. The main game dealt with a crazy cult in America. As much as I loved it, it wasn't horror and so didn't warrant a review. The game featured three additional downloadable experiences. The first had you as a soldier behind enemy lines during the Vietnam war, the second was a comedic jaunt through alien infested Mars, the third is the one I will be looking at in this review as it is all about zombies.

Dead Living Zombies is different to both the main game and the expansions as rather than a large open world area it is instead split into seven different episodes, each of which takes the form of a movie pitch that wannabe director Guy Marvel is describing to a different producer. This is the shortest of the expansions, with each episode totalling anywhere from five to fifteen minutes. So, each episode is a self contained story revolving around the undead. First is Fields of Terror. This takes place in rural America, and has you as a farmer dealing with a zombie outbreak that occurs when a plane crashed in your fields. This was a nice introduction to the expansion, and mainly has you needing to destroy machines which constantly spawn zombies around them.
Burned Bridges is the second one and is one of the better ones here. This has you as a soldier working your way across a devastated bridge. I loved the level design for this one, it remained inventive from beginning to end.
Keeping the imagination going is Undying Love. This is set in a large graveyard and is a retelling of the Romeo and Juliet story, with of course added undead. I will add here that each episode opens and closes on a comic book style intro and epilogue, both detailing Guy Marvel's latest attempt to sell his ideas, but also showing the beginning and end of the stories he is explaining. 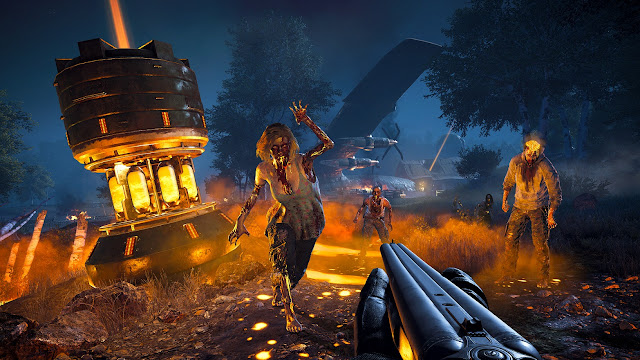 The real stinker of this expansion is Escape From the Rooftop. It had a cool backstory to it (zombie apocalypse has meant the survivors all live on rooftops now), but the level itself took place in a moderately sized arena and saw you fighting waves of undead. This was what I had feared the whole of Dead Living Zombies would be, thankfully just restricted to this one level.
Killer Climate is one of the larger episodes here. It has you as a park ranger battling zombie animals, such as wolves, deer, and even a bear. What was cool about this one was the argument Guy and the producer were having as to the direction the story would take, this was reflected by things within the level constantly changing back and forth.
The Fast & The Fiendish was the shortest one here. It had you as an infected scientist who is on a race against time to get to his lab and develop a cure. With a time limit of seven minutes this led to plenty of running and driving, short but sweet.
The final episode is the excellent Laboratory of the Dead. Starting out in marshland you had to get to a secret underground lab and find the source of an undead uprising.

While the short length may put some off this was on the whole pretty fun. There is replay value in that you open up a score attack mode upon completing each episodes. One complaint I did have was that if you die you have to replay the entire episode again. No so much a problem on the shorter levels, but getting nearly fifteen minutes in and then perishing made my heart sink each time. Overall, while not essential to play, Dead Living Zombies was a fun, albeit brief experience, not bad, but not amazing either. It was a cool idea though.