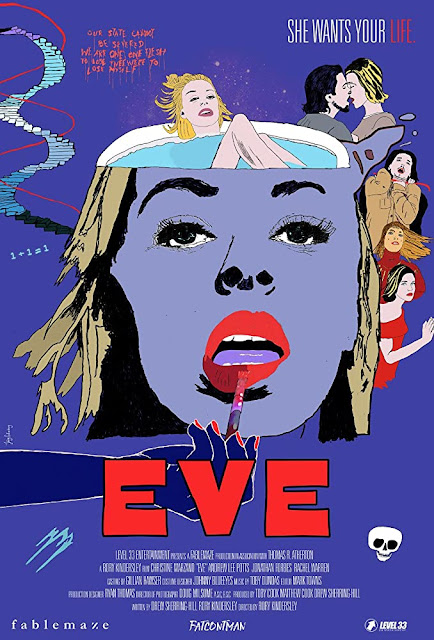 Eve is a UK horror that comes from director Rory Kindersley (Sweet Tooth), who also co-wrote this, alongside Drew Sherring-Hill. To say this stylistic thriller was a head scratcher is no exaggeration, as the credits rolled I was literally scratching my head wondering what on earth had actually happened over the course of the seventy five minute film. I admit to often liking style over substance, and so much of this movie appealed to me, even if I will be hard pressed to write a synopsis.

Alex Beyer (Christine Marzano - Death Race 4: Beyond Anarchy) is a formerly successful actress whose popularity has faded. She hopes to rekindle her fame by getting the part of 'Eve' in a film adaptation of a stage play which saw her win awards as the Eve character. Returning to her stylish London apartment after a holiday with her photographer boyfriend, Liam (Andrew Lee Potts - Primeval) the couple are shocked to discover the place has been vandalised with fake blood, apparently by an Airbnb guest who police suspect may have been a deranged fan. With that on her mind, as well as not being successful at her audition, Alex's mental state starts to deteriorate, and her and Liam's relationship begins to suffer as a result. 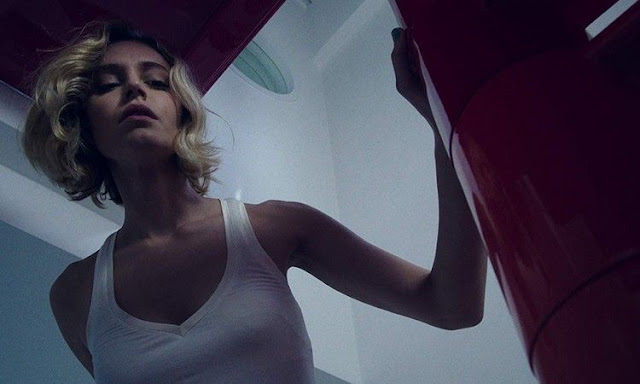 First things first, the multi-storey apartment that Eve and Liam live at is the star of the movie. This is very uniquely designed, and includes a brightly coloured spiral staircase as a centrepiece, a gym, a huge white room that is half bathroom half bedroom (separated by a net curtain), and the living room even has a slide going into it. As an aside, I spent the whole movie hoping that at some point a character would use the slide, but mild spoiler...they never do. With such an interesting building it is good that the majority of Eve is spent in this location, with about 10% showing characters in other places within London. Going well with this attractive building is some wonderful cinematography, which was shot by Douglas Milsome (Full Metal Jacket). A scene near the end in particular was wonderful, with a character at extreme close range in the bottom left corner, and another character blurred in the background. Helping both of these elements was some neat set design, an often re-visited 'insanity room' in particular really stood out. This room was integral to the films plot (I think) so I wont go into much detail, but think a madman's lair with cut out magazine collages, manic writing on the walls, and a projector forever playing footage from an old black and white movie.

It is hard to go to far in any direction when talking about Eve without coming back to the story that I just could not fathom. Events certainly play out, but whether the viewer is being shown the perspective from an unreliable narrator or if what is shown actually happens is never clear. It doesn't help that there are a few characters here who look so alike that I think I spent the majority of the run time thinking they were just the one character. There is a subtext about mirrors here that was a bit lost on me, I think it was trying to say that your reflection is the real you, or the raw version of you. This is explained literally at one point when Alex goes for an audition for what seems to be a sleazy film, but can also be seen in the way she applies her lipstick by mimicking someone else at several integral scenes. The plot is never really made to be a strong part of the movie, so much so that I found myself towards the end thinking this could have probably worked just as a well as completely dialogue free. The way the film flows can be abrasive at times, there are scene cuts that propel events very quickly. An early example being when Alex notices the fake blood on the wall, we see her initial shocked reaction, then a jump cut to her speaking to the police.

The cast of actors were well chosen if the intention was having similar looking people. It isn't even just Alex who shares the look of a different character, Liam and his brother also happen to look quite alike, while the scenes set at auditions feature no end of similar looking background characters. Despite being the protagonist, Alex is a bit of a mystery, the only backstory we get about her is from a conversation with her agent, while from Liam's mysterious phone calls it is clear that those near to her are worried about her mental state. There is a bit of a subplot about the couple's failing relationship, with the majority of the movie observing Alex's slow deterioration.

Eve features some lovely camera work, editing, cinematography, and a real love of the set. It all blends together fantastically, making this at least on surface level an attractive movie. The hard to understand story could be seen as being a bit abrasive, there are parts to it that frustratingly are never explored as much as they deserve to be. For a lot of the run time it felt like nothing much was happening (though plenty of effective nightmare sequences), yet this naturally leads into a third act that was a thrilling as the thriller moniker would suggest. Eve released on October 19th in the UK and Ireland on digital platforms.