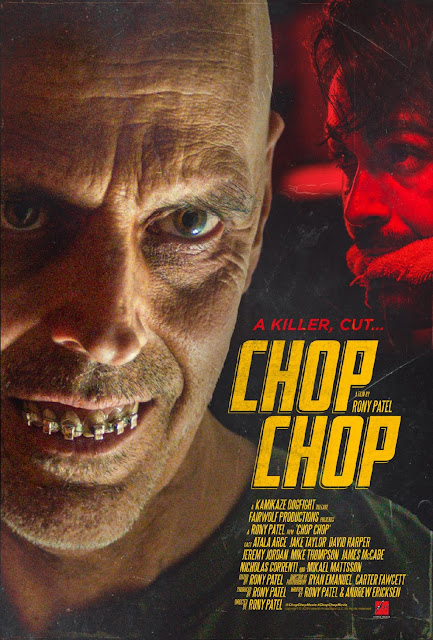 Chop Chop is a farcical crime horror that felt like one of those stoner movies where characters are bounced from ridiculous situation to ridiculous situation, but with murder and mayhem instead of comedic hijinks. It was directed and co-written by Rony Patel (In Me) in what was debut feature film role as director. He also had a hand in the editing, production design as well as being a producer on the film. This was an odd horror that always kept the viewer guessing as to the real intentions of the mysterious protagonists.

Liv (Atala Arce) and Chuck (Jake Taylor) have their romantic evening ruined by the appearance of a sinister serial killer (David Harper) who is there on the pretence of delivering pizza. They end up inadvertently killing the man, and then make the decision to dispose of the body themselves, rather than alerting the authorities. This begins a surreal night in which the couple go on a calm and collected mission to dispose of the corpse, yet each step in their journey results in a higher and higher body count from the two. It seems they really are having the worst luck. 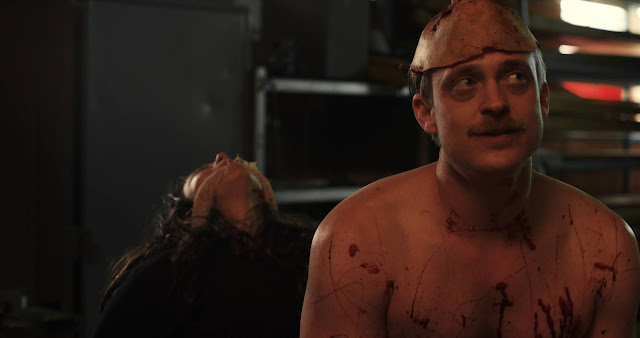 The way Chop Chop plays out makes it at times feel like a bit of a black comedy, as each situation the couple find themselves in results in no end of mistaken intentions. It can be inferred from the films wafer thin story that they are not entirely innocent people, which can be seen both in the unemotional way they deal with death, and the contacts they have that are obviously not on the right side of the law. The film is split into Quentin Tarantino style episodes, each one with its own title card. An early example titled 'Brother' leads into the realisation from Chuck that the pizza guy they killed had an identical twin brother. These title cards often give obscure hints as to the direction the movie is going to head in. Speaking of Tarantino this at times felt like an indie homage to Pulp Fiction with the way scenes build upon each other.

Though there are certainly comedic leanings this gets to be quite nasty at times. It felt as the story progressed events got darker and darker. Moments that spring to mind include a character whose fingers get slammed in a car, and a power drill to the leg. While Chop Chop needs its protagonists to be deliberately shady it did results in the side characters all having much more screen presence to them. There were two sequences in particular that shone due to these supporting actors. The movie doesn't do a good job of naming characters as far as I could tell, but to name check some of these actors whose roles felt unique: James McCabe, Mikael Mattsson and Jeremy Jordan. 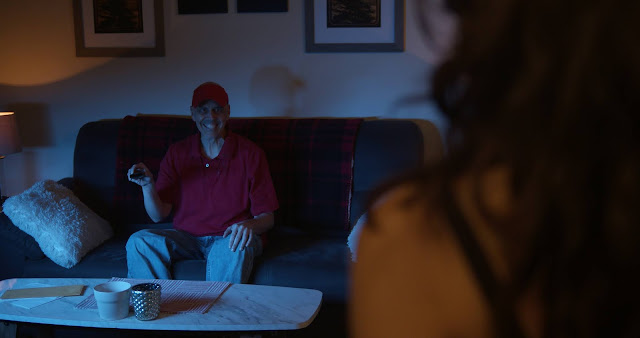 There was some strong cinematography and lighting here, and the camera work was also good throughout. I found the soundtrack to not really be my thing, it had the sound of a heist movie, which did help lighten the mood, but seemed to repeat the same tune a lot. The plot was barebones and like those stoner movie it seemed there just to introduce the characters to new situations. There was never a reveal of just who the protagonists actually were, and the whole movie ends on a bizarre note. It seemed it was meant to be some sort of meaningful cliffhanger, but instead just came across as nonsensical. I did wish that there had been slightly more depth provided, maybe via flashbacks or something, but I just had no feeling for the main couple whatsoever.

Chop Chop was certainly an interesting movie, and it goes to some unexpected places. It was perhaps a little too much style over substance as while I was never bored, I wasn't that involved in the main plotline either. Chop Chop will be available to rent or buy on iTunes and Prime Video on October 20th.