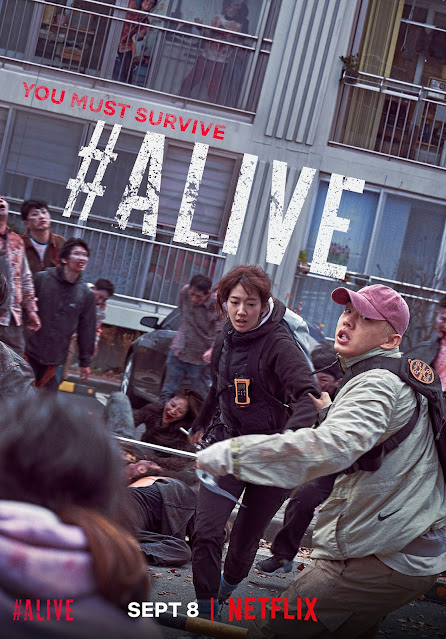 I had heard good things about #Alive and thought the trailer looked good, so I was excited to get around to watching this Netflix zombie film. Being a South Korean movie it is hard not to compare this to Train to Busan. While it is not as good as that movie it is still a solid zombie movie in its own right, especially considering it is director/screenwriter, Il Cho's debut feature length movie.

While the rest of his family went away on vacation, Oh Joon-woo (Ah-In Yoo) stayed behind, being a big gamer and a generally lazy person. For him it turns out this was a good decision as one day he wakes up to discover a zombie outbreak occurring in his city. Pretty soon he is barricaded in his apartment and swiftly running out of food and drink (his laziness meant he hadn't been shopping like he had been meant to). The last message he received from his parents before the network went down was to 'survive', it is that singular goal that drives him. At his most desperate time he becomes aware of a fellow survivor in the apartment block opposite to him, Kim Yoo-bin (Shin-Hye Park). While they cannot meet, they slowly, over the course of several days find ways to get in contact with each other and start to form a friendship. 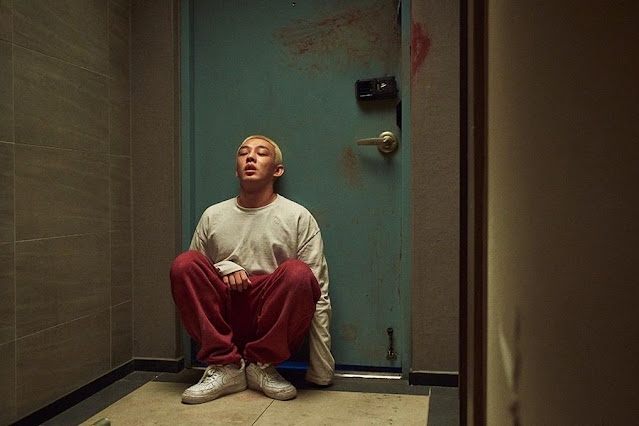 This isn't the first zombie film I have seen that takes place in apartment blocks (that would be the German Siege of the Dead), but it is the first film I can think of where the protagonists thinking was in line with mine. I have often said if somehow a zombie outbreak occurred in real life I would hole up in my house, though I realise that like Oh Joon-woo my supplies would be extremely limited. I liked with this film that there is never some grand plan to make an escape, the characters main goal is to survive, and with all the creature comforts of home that is seen as the place to do it. There are little moments here that work really well, such as Oh still playing online games until everything goes down. I am not sure the characters portrayal was totally my thing. I get that Oh is meant to be a bit dense, and certainly not used to having fend for himself, but I found the exaggerated physical acting for comedic effect to be a bit grating at times. The character has a good contrast with Kim, she is someone who personality wise is almost the polar opposite of Oh. She always comes across as deadly serious and someone who always plans ahead.

The jerky way the zombies move in #Alive reminded me of Train to Busan's undead, in my head as I watched this I made up a story connecting these two films. I liked to think this was a companion piece showing what was going on while the train was making its journey. Of course, this film is not related at all, but the walking movements of the zombies in both films share traits in common. Here, the zombies retain some limited intelligence, they are able to open doors, and are even shown to be able to climb ropes. The make-up on the undead looks fantastic, they have a bloody gory look to them, so that all their skin appears to be covered in open sores. I also appreciated the way they move, the packs of zombies are often shown to be tripping over each other, and their environment in a way I don't recall many zombie films showing. They of course crave flesh, and here they all show this same look of desperate hunger on their faces. From the trailer I did fear that the very best moments may have been right at the start during the initial outbreak. Thankfully there are many mini adventures that play out as Oh goes on short scavenging missions to nearby apartments. The set design was fantastic, all the corridors and stairwells of the apartment are covered in bloody smears and handprints.

Being set in a such a localised location meant occasionally there was downtime, including a couple of montages of characters just surviving day to day. I liked how Oh is forced to finally grow up, his progression over the course of the movie has him go from a near shut-in in to someone who can finally stop being so lazy. The reliance on modern technology gets less and less as the film goes on, all his little gadgets and devices one by one losing power until he is forced to rely on himself. It does lead to some clever moments, such as a drone he has that is used in a few integral scenes. At times the vibe of the film seemed a little too optimistic and I did wonder how exactly it would all end, whether the two would survive, or if they would even ever get to meet up. It's a film about finding friendship in the face of adversity, and how humans need each other. 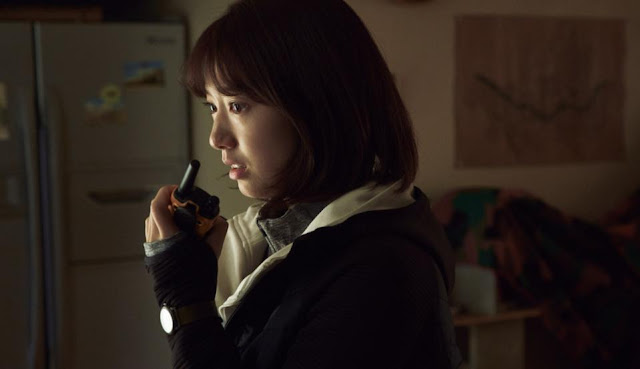 #Alive may not reach the dizzy heights of Train to Busan, yet this more small in scope feature works mainly due to the likeable duo and the decisions made with regards to the great look and movement of the undead. #Alive is available to stream on Netflix.