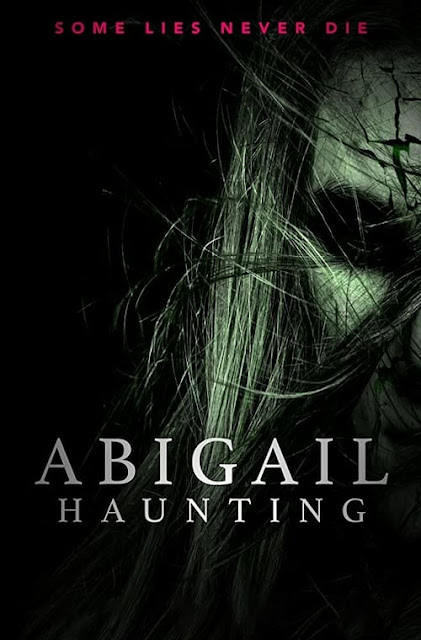 Abigail Haunting is a no thrills low budget paranormal horror that was directed and co-written by Kelly Schwarze. It could easily be seen as a slow burn as not much of note happens from the very beginning to the end. With a decent enough protagonist I didn't mind my time here, though is not going to leave much of an impression.

After escaping from an abusive relationship, Katie (Chelsea Jurkiewicz - The Tormenting of Jones) returns to her childhood home. There she finds her foster mum, Marge (Brenda Daly) is now suffering severe dementia and lives as a shut-in. Katie decides to spend a few days there, but she can't shake an unsettling feel about the place. The longer she stays the more she begins to suspect that something is haunting the place, something that relates to a dark secret from Marge's past.

Barely anything happens during this eighty minute horror, and even when it does it is so slight as to be quite forgettable. Objects occasionally move around on their own, Katie experiences audio and visual hallucinations, and sometimes Marge does creepy things. Aside from that not much else occurs. Thankfully Katie has someone to talk to outside of the monosyllable speaking Marge, in the form of a childhood friend she rediscovers, Brian (Austin Collazo). The scenes with them together were the most interesting, only in that it makes a difference for her not to just be wandering around the house on her own. A lot of the horror revolves around a large garage area that Katie was always warned not to go into as a child. What could be an interesting revelation is told in a strange way that seemed to suck away any importance.

There isn't really much more to say about Abigail Haunting. On the one hand it is perfectly watchable, has decent performances from the small cast, and seems to be filmed competently. On the other hand though it doesn't succeed as a horror, those moments are few and far between and manage never to make much of an impact. There are elements to the story that I did find interesting, but the basic plot is roughly explained without giving the viewer a reason to really get invested with it. Abigail Haunting is due for release on 25th January 2021 thanks to High Fliers Films.