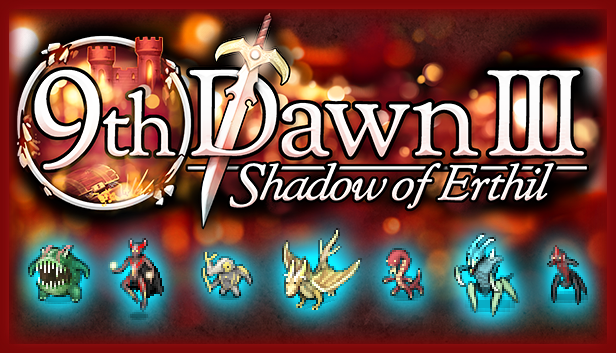 The latest installment in Valorware's 9th Dawn franchise, 9th Dawn III: Shadow of Erthil was due to release on Steam, iOS, Android, X-Box One, PS4 and Nintendo Switch on Tuesday 6th October. I have never heard of this series before, but I will let the press release do the talking...

'9th Dawn III is a huge 2D open world RPG and "collect-a-thon" dungeon crawler packed full of adventure, allowing you to explore dungeons filled with more than 270 unique monsters - and enough treasure, loot, and rare materials to last a lifetime. There are also 1,400 uniquely drawn items to collect - including more than 300 weapons and 550 armor types and accessories!'

This indie RPG takes place in a typically sounding fantasy world, taking in fields, snowy regions, forests and mountains. As you play you can unlock spells and abilities and level up your crafting abilities. You can also recruit monsters to fight alongside you (upto a maximum of ten). In addition you can recruit a companion who too can also have upto ten monster fighting alongside them. Also included in the game is an in world card game that includes 180 collectible cards, and fishing mini-games. On PC and consoles local co-op is an option. Check out the trailer below to see if it looks like your thing.