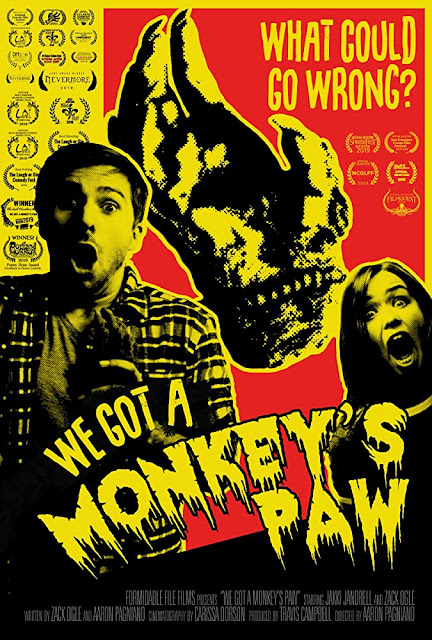 The award winning We Got a Monkey's Paw is a short comedy horror film that was directed by Aaron Pagniano (Dog City), who also co-wrote the story with Zack Ogle. Everyone knows about the monkey's paw idea, an object that grants the holder three wishes, but always manages to twist the wish into something awful.

Jakki (Jacqueline Jendrell - Sunset on the River Styx) is studying at home when her housemate and best friend, Zack (Ogle - Polterghost) invites her to join him in playing with a Ouija board. Zack has a deep love for everything haunted and cursed and has managed to build up quite the collection over the years. Jakki has no interest in stopping her studies for him, but an errant wish for Jakki to show some interest, made just as Zack happens to be holding a monkey's paw sends the duo on a hellish night of misfortune and mayhem, that takes in time travel, zombies, possessed dolls and a whole lot more..

I would describe the comedy here as zany, something which I can usually deal with in small doses. Zack is the more crazy one balanced against Jakki, who is far more rational and collected. Over the course of eight minutes a lot happens and it did get better the longer this went on. I enjoyed the second half a lot more, and also found the end scene to be very enjoyable. The horror never over powers the humour and even when things seem to be at their worst everything is still bright and colourful. The script was well written and while the characters don't seem to have too much to them I still finished this thinking how great this would have worked as a show, each episode bringing the two to a different type of horror.

There was little to dislike about We Got a Monkey's Paw, once this gets going it was a breezy eight minutes of bad choices and ill judged words, held together by a good script and some fantastic set design. It may be a comedy, but you can see the love for horror here.