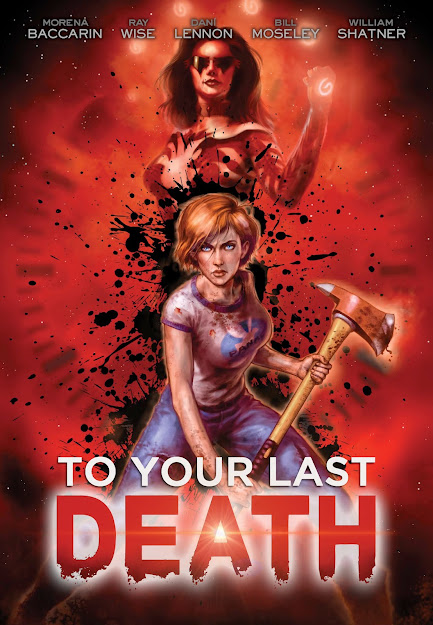 The award winning To Your Last Death purports to be the first ever U.S made 2D animated horror movie. Directed by Jason Axinn, this horror immediately caught my eye due to the animation style that is very similar to the look of the animated comedy, Archer. Despite this being an animation it is very bloody and dark, at times so much so that it did feel it was trying too hard to be 'edgy'.

The film begins with a bloodied and beaten Miriam (voiced by Dani Lennon - The Love Witch, Dracula: Reborn) emerging from her father's company HQ. She is swiftly arrested for the murders of her brothers, Ethan (Damien C. Haas) and Collin (Benjamin Siemon), as well as her sister, Kelsey (Florence Hartigan).  She tells the detective that it was actually her father, Cyrus DeKalb (Ray Wise- Batman: The Killing Joke, Twin Peaks) who killed them, and who also tried to kill her. With Cyrus being an influential figure, and with her having a history of mental illness things don't look good for Miriam. That is when she is visited by a strange woman (the Gamemaster) who only she can see. The Gamemaster (Morena Baccarin - Deadpool, Gotham) tells her that she can be given a unique opportunity to correct the past. The woman has the ability to send Miriam back in time to the start of the evening of mayhem and bloodshed, and that with the knowledge of what is to occur she will be able to change fate by saving her siblings. With no real alternative Miriam agrees, but it soon becomes clear things are going to be a lot harder than she anticipated. The Gamemaster is very much a neutral in the situation and belongs to a group of mysterious entities who are playing a game, placing bets on whether Miriam will be successful at changing her past or not. The Gamemaster at her own discretion has chosen to influence events, to make them more interesting for the entities twisted enjoyment. 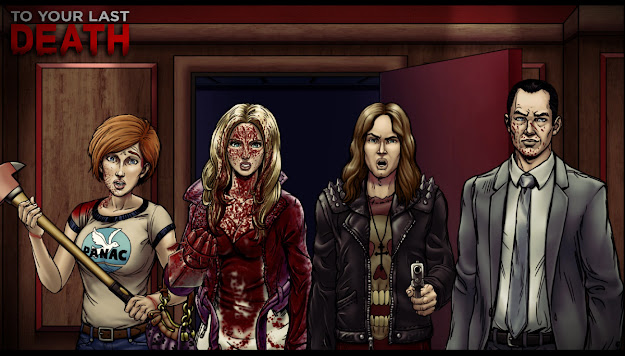 Boiling it right down this is Groundhog Day if it was mixed in a pot with Saw. Death isn't the end here and so characters can suffer all sort of really quite nasty deaths only for time to be rewound and them to be fine. On occasion this works in the characters favour, one part sees Miriam suddenly stabbed to death, then when time is reset she is able to avoid this. It isn't a perfect time loop as the film plays out more or less in a continuing order, each reset puts characters back a matter of moments. What made this feel more different was how the motivations of the characters can be changed based on the Gamemaster's participation. She is most keenly shown being able to change Cyrus's thoughts, such as altering the order in which the siblings are to be killed in the Saw style traps, she can also change other characters actions, and this can make a reset where things are a lot different to how they had originally played out.

There is a lot of blood and violence here, more so then if this was a live action film. The violence is on Saw levels of sadistic cruelty and on occasion I did think it was a bit gratuitous. One scene has a character strapped to a contraption where they have to cut themselves with a knife in order to fill up a tray with blood in order to stop them being killed by a lethal saw. This was a nasty and quite unpleasant scene that due to the time reset concept didn't technically even happen. I didn't really see the need for its inclusion. It's odd to say that as there were plenty of other sequences that occur that really are over the top in their violence and which I loved. Death by electrocution with the inclusion of eyeballs popping for instance was one nasty looking highlight. This may be an animation but this is violent stuff, and covers topics that sometimes felt a bit forced. Homophobia, rape, child abuse, self harm and autoerotic asphyxiation all are mentioned and sometimes makes To Your Last Death feel like it's trying really too hard to be dark. Maybe as a live action this would not have worked, but due to the fantastic voice acting across the board it just worked here. The film takes place in a cruel world, and the story goes to some twisted places. I liked the kind of meta way the Gamemaster's changes to the story both make it more interesting for the entities and for the viewer of the movie. It was also cool to get a load of recognisable voices, such as William Shatner (Star Trek) who provides a Rod Serling style voice over at several points, and the always entertaining Bill Moseley (The Devil's Rejects). 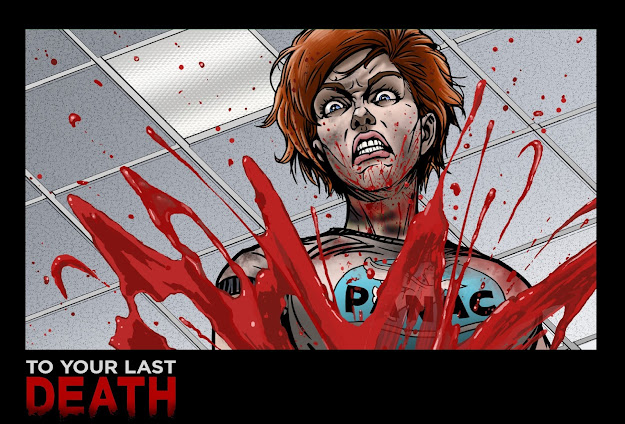 If this had just been a live action horror I think I would have still enjoyed it, but not as much as I did in an animated form. The poe-faced seriousness of the characters and the over the top bleak vibe fitted an animation so much better, it allowed me to not take it all as seriously as it wanted to be taken. I thought the style of the animation was attractive also, it is never smooth, but that made for a more strange and creepy look that felt like an animated graphic novel. I wasn't ever sure if the entities angle was something I thought worked well, but as a time loop style horror this did something that in its base parts is very familiar, but as a mishmash of different styles this came across as something that felt unique. To Your Last Death is available now on Digital HD and Cable VOD, and it comes to Blu-ray on October 6th, thanks to Quiver Distribution.