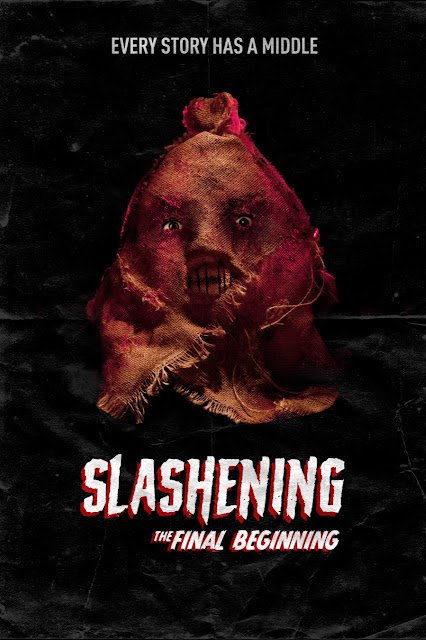 Way back in 2016 I did a news post about an Indiegogo campaign running to raise funds to make a sequel to the comedy horror film The Slashening. Well some four years later and the film has been finished. Slashening: The Final Beginning is once again written and directed by Brandon Bassham (The Slashening, Fear Town, USA) and sticks with the type of humour his previous movies shared. There will be unavoidable spoilers for the first film to follow.

Five years after the events of The Slashening, in which a house full of girls (and a whole stream of pizza delivery guys) were murdered by a sack mask wearing maniac, and Madison (Addie Weyrich) has moved to Brooklyn after the suicide of her father. She has joined a support group for people affected by murder, and she reveals that her father was plagued with depression after holding himself responsible for the death of all his pizza restaurant staff at the hands of the sack mask wearing killer. The group is led by Pat (Patrick Foy - The Slashening, Fear Town, USA) who himself survived that horrific event. Her appearance at the group starts a chain of disappearances, unbeknown to Madison a new sack mask wearing killer has appeared, and for some reason has chosen the members of the support group as its targets... 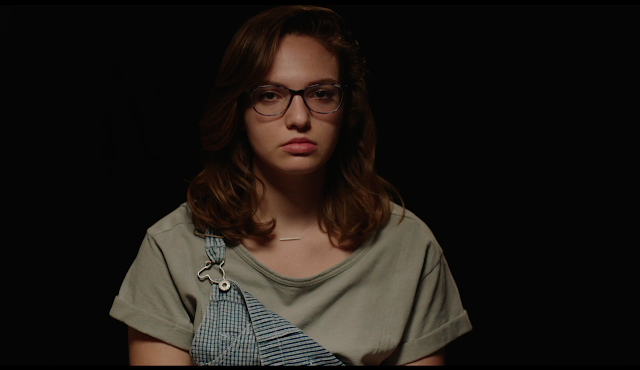 I feel it would have been far easier to choose the final girl of the first film as the focus for this one. To instead make the connection via the pizza guy montage sequence (by far one of the highlights of that first film) was such a cool decision. To have a throwaway scene mean so much to the main character here worked wonderfully. Of course there is Pat as well, Foy reprising this character yet again, and he was as good as he always is. Madison didn't really have much to her character, she appears throughout but she never feels centre stage and just faded into the background a bit. The prologue to the movie features a completely different cast of characters, and was something which had been shown during the initial campaign to raise funds. This sequence still manages to fit in well, and has a great standout character in the form of Greg (Carl Foreman Jr.) whose bright chatty persona works at summing up the entirety of the first film.

I have said previously, but the reliance on sex jokes the first time around really didn't appeal to me. This being a sequel it really is more of the same, and so the vast majority of the humour here bounced off of me. A good chunk of The Final Beginning is dedicated to this type of comedy, but not so much as before. A lot of the jokes this time around are based on feminism, and taking a comedic look at the #metoo movement. It feels strange to say but this gave a dated feel. Of course that is all still relevant and meaningful, but 2020 with its world pandemic, natural disasters and black lives matter movements has pushed the important topic of women's rights into the background a bit, making the many jokes around the subject of female empowerment feel a bit old. As always though this is at its best when it is making jokes about the slasher genre, leading to some pretty neat moments. Many of these moments all feature in the prologue though. Despite not finding the film that funny I did think where this eventually goes was a neat idea, the films finale was both unexpected, but also well put together, making for an enjoyable finish. 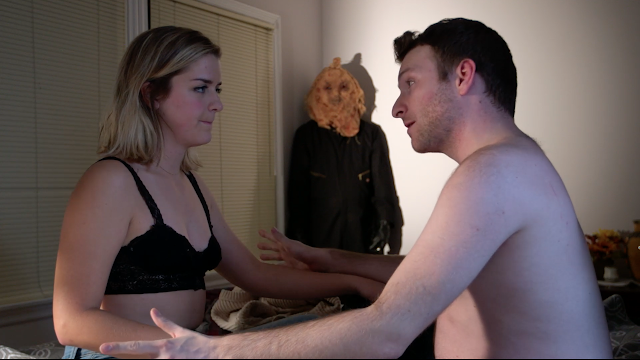 So, the plot is once again barebones and the comedy mostly hit and miss. The actual filmmaking surprisingly impressed me in a few different scenes. There is one scene about halfway through the film that takes place at an art exhibition. This whole scene appeared to be a single take and had the camera in the middle of the room slowly rotating as events take place in a 360 degree radius. This involved small dialogue scenes, plenty of dancing, and even a murder. It was an impressive shot. A similar surprising moment happens later on in the film when the screen gets split in half, the same scene playing out from two different characters viewpoints. For a low brow horror comedy moments like that couldn't help but stand out in a good way. The death scenes were inventive in the first film, here they are less so, with many characters falling victim to knife or machete blows, with only a few characters getting treated to far more visually interesting deaths. I would say the death count is at least on par with the first film, certainly seemed to be plenty of deaths peppered throughout.

As a sequel this film works, it both rewards viewers of the first film, as well as brings any new people up to speed. I also liked the path they took with the story, unexpected but again, it worked well. With these films though the comedy is never really going to appeal too much to me, and so that part can't help but bring down the enjoyment a bit, regardless of how spirited some of the actors get into things. Still, this wasn't bad at all and had some moments that moved along in a pleasing fashion. Slashening: The Final Beginning will be playing at several online film festivals throughout the year. This includes the Milwaukee Twisted Dreams Festival on October 4th and Mr. Holehead's Warped Dimensions Film Fest on September 27th.