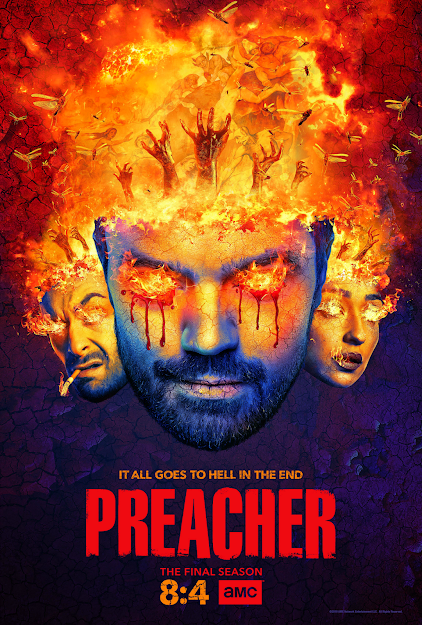 The fourth of final season of Preacher is currently running on AMC, and so I checked out the first few episodes to give my take on what it is like. Before joining in season 4 the only experience I had ever had of Preacher was reading some of the graphic novels (that the show is adapted from) as a teen. My memories are hazy but I remember it being weird and violent, while I never really understood it that well I thought it was pretty cool. Despite not having seen any of the previous seasons I'm sure there will be unavoidable spoilers in my preview. Have patience if some of my summary is incorrect, it is all based on my first impressions.

The vampire, Cassidy (Joseph Gilgun - The Last Witch Hunter) has been captured by the violently benevolent forces of Herr Starr (Pip Torrens - Star Wars: Episode VII - The Force Awakens, Tomorrow Never Dies) and kept captive at their religious base. Episode 1, Masada has the Preacher, Jesse Custer (Dominic Cooper - Agent Carter) and his love interest, Tulip (Ruth Negga - World War Z) attempt to break him out. This was a good first impression, while it is violent and nasty at times there is also a rich vein of black humour running throughout. There was plenty of action, but also dream sequences and it all looked fantastic. Some of the effects were quite fun, such as a poor henchwoman who ends up squished between a huge door. The core story was easy to follow, and while the focus is very much on Jesse and Tulip there were various other threads that were dipped into occasionally. However brief these other scenes were it did a good job of showing where all the various characters were, and what they were up to. 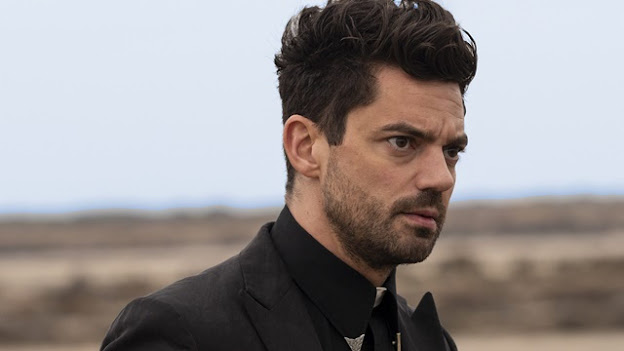 Second episode, Last Supper sees Custer on his way to locate a strange rock he saw in a vision, meanwhile Tulip has her own mission she is intent on completing. This second episode brought out some of the more surreal moments that I assume the show is littered with. Most notably being a prologue that shows God (Mark Harelik - Jurassic Park III) hanging out with a stop motion dinosaur, with the real explanation for their extinction revealed. The show continues its dark humour, such as when a man is made to kill himself with a hand grenade and his last words asking for his browsing history to be deleted off his computer. Despite a large cast of characters the focus is mainly split between Tulip, Cassidy, and Custer, with just a few scenes that feature Herr Starr, and his main henchwoman, Lara Featherstone (Julie Ann Emery - Better Call Saul).

The third episode, Deviant has Jesse Custer making a side stop to rescue a young boy from a house of perverts. The episode also dedicates a good chunk to the continuing misadventures of Arseface (Ian Colletti) and The Saint of Killers (Graham McTavish - The Hobbit trilogy) as they hunt for the Preacher. I remember Arseface from the comics I read as a teen so it was fun to see his character. There was a long corridor fight at one point in this episode, with a lot of it done in one take. It gave me real Daredevil vibes and was well choreographed. I like that Jesse's almighty power is always shown to have a negative side to it, he has the power to make anyone do anything but it never seems to go according to plan when he uses it on others, unless it is for petty things like having him able to smoke in an airport lounge. The first three episodes have played with time, by showing Jesse in the future and present, so it was nice to see these two timelines finally met up.

Despite not knowing anything about the show I enjoyed my brief time with it, and shows that even missing out on three seasons I felt mostly confident that I knew a lot of what was going on. It helps the show looks quality, with great special effects and a large cast of talented actors. Preacher continues on AMC Mondays at 21:00 until 5th October, so check it out!