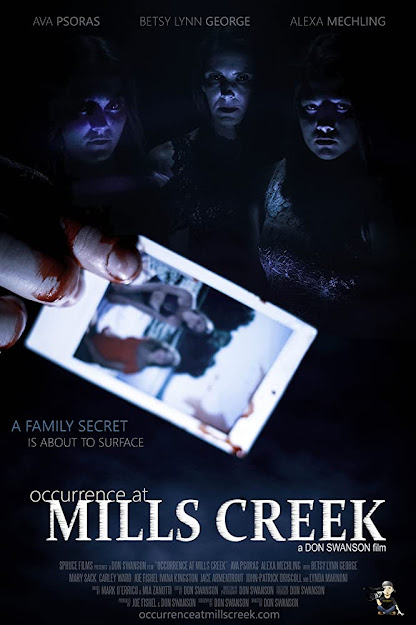 Occurrence at Mills Creek originally came out in the form of a short film back in 2019. As far as I'm aware this short film was always intended to be a part of a larger story, and was made up of footage from the opening act of an upcoming feature film. Truth be told I wasn't that taken with it, I thought it was confusing, and I thought it didn't work that well as a stand alone piece. Having now seen the feature length version of Occurrence at Mills Creek I can affirm with context it all works so much better. Despite not really understanding the story I thought this movie was fantastic, and by far the best film I have personally seen from Don Swanson (director of the short, as well as A Wish for Giants and What Was Lost).

Ava Psoras (reprising her role from the short film) stars as Clara, a young woman suffering from a deep depression. When she was still a teen her mum died, then one tragic day an event happened at the titular Mills Creek that saw Clara accidentally kill her younger sister, Cassandra (Alexa Mechling - the original short, A Wish for Giants). Unable to bear the guilt of her actions she tried to commit suicide, and now regularly sees a psychiatrist, and gets by with the support of her best friend. After her father, Victor (Joe Fishel - again, the original short, The Dark Knight Rises, Jack Reacher) passes away, his step sister, Cecilia (Mary Sack - Camp Blood 666) gets in contact and it seems Clara's support bubble is growing. However, she is haunted by visions of her deceased mum and sister and fears she is losing her sanity. Could everything she is experiencing be down to mental trauma, or is there a more supernatural explanation? 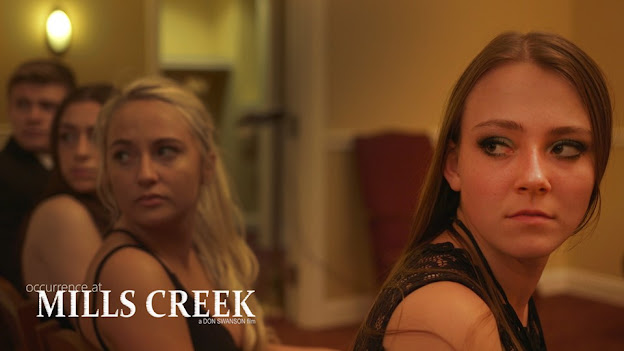 The very thing I complained about in the short is the part that I most enjoyed about Occurrence. We follow Clara through her eyes and so are given an unreliable view of the world. There are plenty of dream sequences throughout the film, and often they are so integrated well enough that what appears to be a normal scene will suddenly change into an obvious nightmare. It led to a story that was hard to follow, and I curse my own low intelligence that I often wasn't quite sure what was happening, regardless I was enthralled. Towards the films final third I was really hoping it wouldn't drop the ball and turn bad, thankfully it never did. A lot of the time there is a fine balance between events being the result of mental health issues and events actually happening. Things such as doors opening on their own and the visions Clara sees of her relatives are never resolved. What is clear is that Clara is a troubled soul who has suffered a lot. In the films I have seen of Swanson there is always a grounded feel, that outside of the horror these are real characters flawed as normal people are. Due to this even up to the halfway mark I couldn't quite decide if this was even a horror, or just a drama. It didn't need to do so, but this definitely leans into the horror side of things more and more as the film progresses.

My memories of the short had the filmmaking nowhere near as good as it actually was. Even watching scenes I had seen previously I was blown away with how well directed they were. The whole incident at Mills Creek for instance is wonderful with how it is all shot and edited together. That goes for a lot of the dream sequences where characters change location with the change of a shot. The early suicide attempt takes place in a field of snow, and red blood onto white snow is always such a wonderful look. Special mention also goes to the music and sound design. The main score, composed by Mark D'Errico fits the vibe so well, while occasionally some of the music choices outside of the score felt a little bit teenage angsty at times the music added mood for the most part. The sound mix for characters voices always felt strange, but not in a bad way. It gave me a feeling of 70's films with how crisp and clear characters sounded no matter their location. There is one sequence towards the end when multiple characters are whispering, I was fortuitous that I have my speakers set at either end of my computer, as each whisper in turn came out of a different speaker which added so much to that particular scene. Special effects when used were effective, and at times there is a lot more blood than you might expect for what is mostly a drama. This includes some of the nightmare sequences where characters appear with blood running out their eyes. 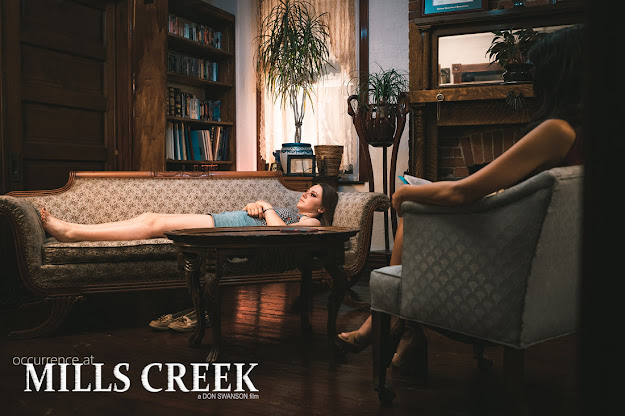 Having no particular fondness for the original short I didn't have high hopes for this version of Occurrence at Mills Creek. That is to my shame as this was a enjoyable drama that just seemed to flow by like a hot knife through butter. I guess I would say some parts of the story felt a little bit generic at times, and some story beats required you to not really think too much about how realistic they were. Overall though this was a most pleasant surprise, a film that once again shows the demons of the mind can have more power over a person than any actual demon. Include below is the slightly cheesy music video taken from the film.