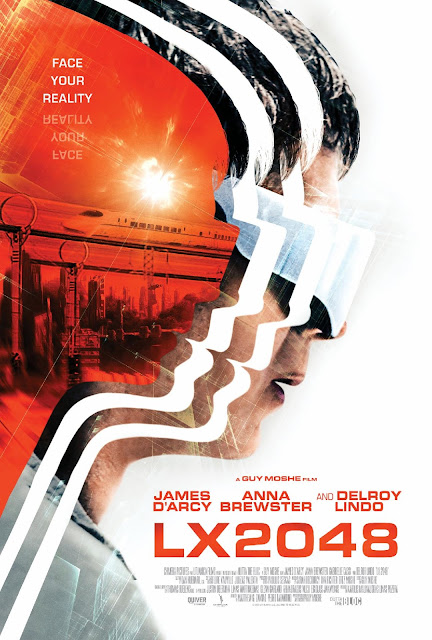 LX 2048 (written and directed by Guy Moshe)  has got to be one of the strangest films I have seen this year. It's a sci-fi that combines elements of thriller, drama, comedy and more. It also manages to not have a central story to it, each side plot seemingly just as important as the last, which means the film is constantly going off into new directions and leaving old storylines behind as it looks to the next topic. Starting off at almost Black Mirror levels of technology created dystopia this becomes more and more surreal with a key theme seeming to be just what is it to be a human.

This takes place in a dystopian future in which the rays of the sun have become so harmful that most people choose not to leave their houses in daytime, instead conducting their business inside a virtual realm accessed by wearing VR goggles. Adam Bird (James D'Arcy - Avengers: Endgame, Exorcist: The Beginning), a broker, is one of the few who still does go outside, he despairs at what has become of humanity who choose to spend nearly every waking moment in the virtual realm. After learning he is dying he becomes concerned with what will become of his family who he is separated from, and so sets out to find a way for his soul to live on once his body has passed.

My synopsis is at least what LX 2048 initially seems to be about, but I'm not even sure that was actually what was going on. Of all the future dystopias I always though living in a VR world would be the coolest, but here with barely anyone actually 'living' it is shown to be a bit of a nightmare. Many films would have taken this idea and been content to create a story around it, but here that is just one aspect. This is also a world in which clones exist and where technically death is no longer a barrier. People have clones set up so that if they die they will come back in an altered form. These clones have all the memories of they people they are of, yet have been augmented to be the ideal form of that person,an unrealistic version. That isn't even all of it though, there is also an exploration into A.I and what constitutes a free will. In particular this is brought up with Adam whose marriage dissolved due to him having an 'affair' with an A.I construct he created, with some of the one hour forty run time dedicated to his attempts to somehow bring this A.I into the real world. The film is all over the place, but it was always fascinating, whichever aspect it happened to be exploring.

D'Arcy had a complex role to play and he carries a lot of the movie on his shoulders. There are scenes where he is in the virtual realm, but much like the characters aversion to this place the viewer too is not able to experience it. This leads to conversations he is having with multiple people where we just see Adam sitting in a chair monologuing to characters we can neither see nor hear. This helps create the sense of pure loneliness and despair the character feels. The real world is a drab lifeless place, grey sterile corridors and bland featureless houses. This contrast is shown in one of the few moments where the viewer is shown the virtual realm, a bright sunny beach full of colour. Adam is not a likeable character in that he is very flawed. He is insecure, anxious and prone to outbursts, though with most the world taking some kind of mood stabilising medication (yet another dystopian idea thrown into the heavy mix) he comes across as the most real of everyone you meet. Notable side characters include his wife, Reena (Anna Brewster - Star Wars: Episode VII - The Force Awakens), and the retired inventor, Donald Stein (Delroy Lindo - Get Shorty, Malcolm X) but even these only get a few scenes more than the rest of the minor side characters.

The widely cast topics sometimes give a feel that there isn't really much of a story at all with LX 2048. With so many ideas explored and then left by the wayside it feels like there isn't an overarching story going on. You would normally expect a third act to really sew things together, but this is when the movie gets to its most surreal. The whole last half hour gets more and more comical as the ramifications of all the ideas get explored in more and more farcical ways, it brought to mind Terry Gilliam's Brazil with how strange things become. The negative side of this flow is that the film feels at times like a series of lectures rather than a fully contained story. It's the same character, sure, but each situation he finds himself in felt like a series of mini-stories.

LX 2048 felt like a mixing together of various types of media, bringing with it ideas explored in Blade Runner 2049, Brazil, Surrogates, Black Mirror, heck, even Ready Player One. That it does so in a way that is still engaging despite the story taking a hit was something that really appealed to me. With how this year has gone, with so many people working from home this felt like a dystopian future that could in parts one day be where we as a race are heading! LX 2048 premiered in virtual cinemas (how fitting) and North American VOD today, September 25th.