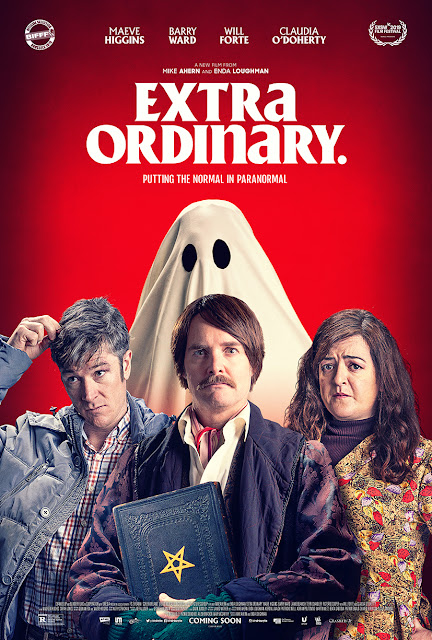 Extra Ordinary is an Irish horror comedy that for the most part is sweet and innocent, yet has the occasional moment of high violence and gore. Directed by Mike Ahern and Enda Loughman, this films humour is never overtly funny, but at the same time doesn't do anything to offend. The simple story told in a mostly family friendly way, again, aside from the moments of high violence.

Rose Dooley (Maeve Higgins) is a kind and lonely driving instructor in a small Irish town, who also has the gift of being able to contact the dead. Initially Martin Martin (Barry Ward) contacts her in order to help him exorcise the spirit of his dead wife, who is causing him no end of trouble at home. However, after his teenage daughter, Sarah (Emma Coleman) is found comatose and floating above her bed, Martin instead begs Rose to help return her to normal. The girl has been chosen as part of a demonic sacrifice, that washed up one-hit wonder rock star, Christian Winter (Will Forte - Gravity Falls) is intending to perform in order to make a comeback. To counter this Rose and Martin team up in order to collect ectoplasm from seven different ghosts, which is said to be the only way to return the girl to normal. 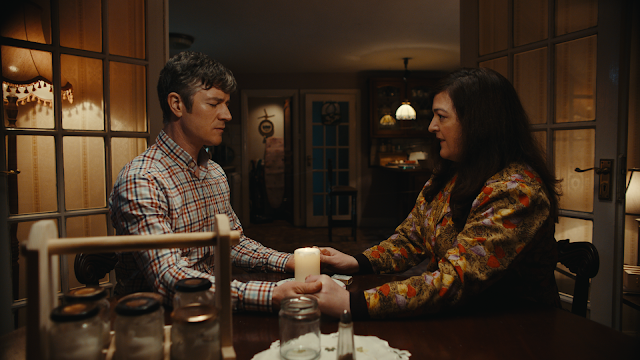 While there are a whole host of side characters it felt like a lot of the film rested on the shoulders of Higgins, Ward, and Forte. It's a good job that all were perfectly cast, especially Forte's wonderfully over the top Christian Winter who was dramatic, flamboyant and cheesy in every scene he appeared in. All three characters get flashbacks at one point or another, Winter's was the best, his one-hit wonder song shown as part of this. With Rose, her father was a local exorcist who made plenty of instructional videos, such as how to deal with 'Gloating' (floating goats), these are intercut throughout the movie and are made to look like eighties VHS tapes, complete with low quality footage, and slightly distorted audio. All of those moments were wonderful.

The humour was often done in a way that I don't think was meant to be taken as hilarious, more that weirdness is the chosen path. A couple of times there were some decent jokes that worked and often involved music. One of these had dramatic music playing as Winter prepares for his sacrifice, until he leans over and switches off a nearby tape deck. A later scene involved a high action car chase, full of kinetic shots and thrilling music, before the music cuts out and a pedestrian side on camera angle is shown to reveal both the cars are both actually going ridiculously slow on a straight road. There was never anything laugh out loud though so not much of a lasting impression was given. 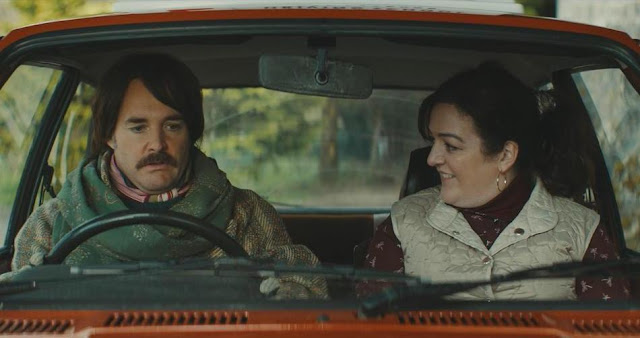 The story is very simply told with the horror elements only popping up in a couple of scenes. The whole exorcising ghosts part of the plot is shown mostly via one montage sequence and never designed to be scary. As an odd contrast on occasion things do get very bloody, and the effects for these moments were good. In general though the simplicity of the plot meant at times I could see the blueprint it was following, such as the later mid-act trope of the protagonist duo falling out with each other. By the time the fast paced finale rolls around things seemed to move at a breakneck pace that made things feel a little too chaotic.

With quirky humour and likeable characters it was hard to feel too negative about Extra Ordinary. It was a mainly lighthearted jaunt that neither outstayed its welcome or particularly delighted. Extra Ordinary is currently available to stream on Netflix.