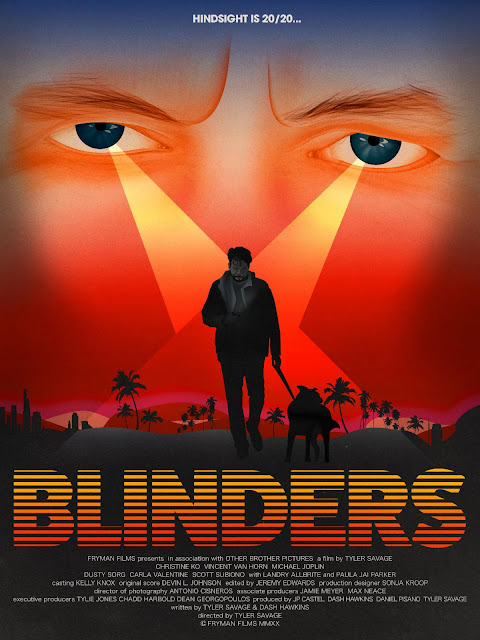 Blinders had its world premiere at Arrow Video FrightFest Digital Edition 2020 last night. This horror from director Tyler Savage (Inheritance), who also co-wrote it along with Dash Hawkins follows a familiar idea (such as with dark comedy The Cable Guy and the mediocre The Gift) but brings it right up to modern day, while also excelling with the casting choices.

Andy (Vincent Van Horn - Inheritance) has recently moved to L.A to start himself a new life after a messy breakup with his girlfriend. Drinking in a bar one night he happens across Sam (Christine Ko) and the two make an immediate connection. With things going well Sam orders a share drive taxi and they head back to her place. The next day Andy happens to bump into the driver of the taxi, a man named Roger (Michael Lee Joplin - #Slaughterhouse) and due to being new in town he agrees to Roger's request to hang out sometime. The two meet up but Roger's intense persona puts off Andy a bit, which is then compounded by Roger constantly texting Andy wanting to meet back up afterwards. With things going so well with Sam he decides to cut Roger out of his life. Angry at being rejected Roger makes it his aim to ruin Andy's life, with identity theft just the beginning of his twisted plans...

Blinders was a bit of a nasty film, which is surprising as it doesn't start off that way. I'm not actually a fan of this sort of horror, peoples lives getting ruined by a maniac, while no one believes them doesn't make for a lot of fun. This movie though was so well made that I was still able to appreciate it despite my misgivings with the story. The directing and editing here was often pleasing, some scenes feature some great lighting, and combination of all the various moving parts. A scene that sees Andy unknowingly turn up at the house of a drug addict was one such example where everything comes together perfectly. There is a gradual ramping up with the events over the course of the 86 minute film, and while the general story is familiar this works due to the main characters.

While Andy is the protagonist I liked how his character is shown to be flawed. Over the course of the movie we get to his angry side, and his lack of patience with people. That, coupled with his penchant for telling white lies creates a feeling that he is partly his own worst enemy. Joplin was the standout actor here, while everyone else were also good, his manic Roger steals the show. This character was in the film far less than I expected he would be, but this just makes his appearances all the more memorable. I liked the glee this character seemed to have when doing the things he was doing. Sam is maybe the weakest character here, but only as she only really exists with relation to Andy, we never get to see her character unless her path crosses with Andy's story. Due to this we never really get to know her that well, which does work with some respects. The story surprised me a lot, especially in its third act where things get a lot more intense, though I'm not sure it quite worked out perfectly.The inclusion of social media and modern technology gave the movie a more modern feeling than others of its type, and there is some comment on how obsessed everyone is with technology these days. That everyone is walking around living their lives with blinders on, not really paying attention to anything that isn't in their own personal spheres.

Blinders was a very well made horror that excelled due to some great casting choices and good directing. The story at times felt slightly familiar but this thriller kept me invested all the way to its twisty end which it had to take some hits to character development to really land.