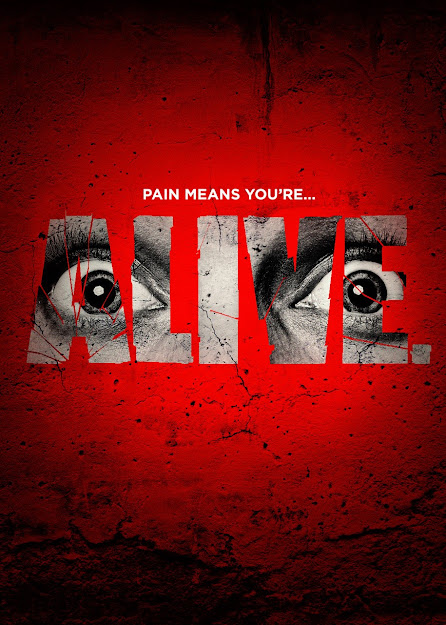 The award winning Alive has been on the festival circuit for the past few years, and has now been released online. Directed by Rob Grant (Yesterday) and written by Chuck McCue and Jules Vincent, this bloody horror features mainly just three characters, culminating in a sucker punch of an ending that I didn't remotely see coming.

A man (Thomas Cocquerel - the upcoming Escape Room 2) wakes up severely injured in a seemingly deserted hospital. He soon finds out that he is being looked after by a middle aged man (Angus Macfadyen - Saw III), who is also treating a woman (Camille Stopps) there at the same time. Neither of the two patients have any memory of who they are, or what has happened to them, and it soon become clear that their rescuer is a little bit crazy. Using increasingly sadistic methods he slowly nurses the two back to health, realising how unhinged the man is they begin to plot their escape...

It's fitting that Macfadyen has previously worked on a Saw film as this one fits nicely into the torture porn genre of body horror. From the bloody start to the finish the two patients are nearly always covered in blood, whether their own or others. As you may expect characters suffer a lot and get tortured a lot, though here their captor rather than trying to hurt them in his own way believes he is caring for them. All three main actors were great in their roles, especially Macfadyen who felt like an even more crazy version of John Goodman's Howard from 10 Cloverfield Lane. The dynamic of the three is what keeps the film flowing and leads to three separate feeling acts in which the stakes get raised higher and higher.

Key to the atmosphere of Alive is the wonderful location of the derelict hospital, the dirty corridors, boarded and chained up doors and windows, and the discovered oddities within make it feel like a world unto its own. By having amnesiacs as the protagonists there was always the expectation of a huge reveal as to who they actually were. Throughout Alive blurry first person flashbacks pop up to create a sense of who these characters were, the woman remembering a home invasion, the man remembering being in prison. The reveal doesn't become centre stage, instead these characters are born anew, and through their shared experiences they begin to form a bond. By the films third act I was fully prepared for the back story to never be resolved, and I was fine with that, yet it absolutely is and done in a way that was very unexpected. 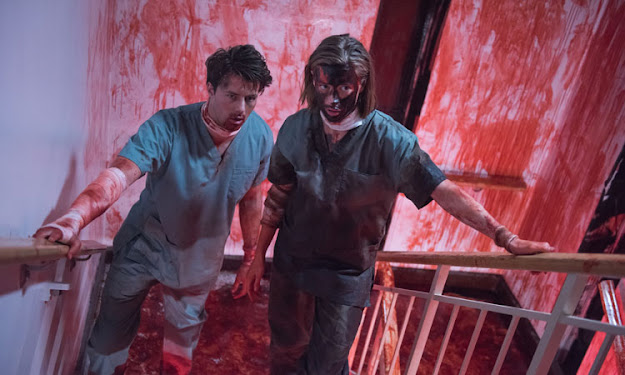 Complimenting the great set design was some effective lighting, and also there were some special effects that always looked the part. I don't really want to mention anything of what happens, but there are a few moments of body horror that were quite gruesome, though that wasn't the aim of Alive, it is often the threat of violence that creates the most tense moments. The horror of being at the mercy of an unbalanced madman while too injured to really fight back made for some nasty moments, and made Alive a horror film through and through. It continues past a traditional end point for these types of horrors which made that third act all the more intriguing. Add in a villain who is a lot more robust than you would first expect and things every now and again erupt into thrilling chase sequences.

I went into Alive not knowing anything about it, and over the course of 90 minutes I was so invested in the story playing out. While it is harder to care about blank slates than layered characters it was still easy to want them to win against their captor. With good performances all around and a great looking location this was a hard film not to enjoyed. Alive has a VIP advanced release on Knotfest.com running from September 11th - 17th. After this time it will come to plenty of other platforms, check it out!