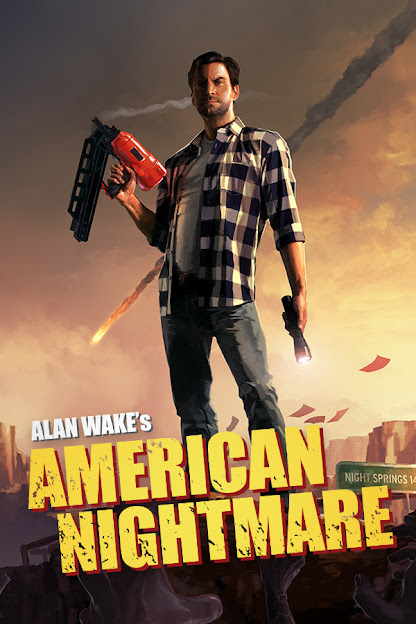 With how good Alan Wake is it was criminal that it never received a sequel, especially considering the game ended on a bit of a cliff-hanger. Thankfully it was never abandoned in total, the second expansion for Control is a crossover, and back in 2012 a downloadable quasi-sequel/spin-off for Alan Wake was released on the X-Box 360, titled Alan Wake's American Nightmare. At the time of release I brought it, but it is only now some eight years later that I have gotten around to playing it, all in preparation for the newly released crossover. As a warning there will be spoilers for the end of Alan Wake and its expansions.

The original game ended with the titular author trapped in an alternate nightmare realm dubbed the 'Dark Place'. The expansions had him battle for control of his fractured mind, and culminated in him achieving this, with the promise that he was going to find a way to write his way out of there. American Nightmare picks up two years later, and in a way Wake has been successful. He once wrote for a Twilight Zone style show called Night Springs, and using the backbone of an episode he had written (about a doppelganger) he has found a way that he is able to leave the Dark Place for brief periods of time, but only at points in reality where other worldly events are happening. An evil version of Wake named Mr. Scratch has invaded the real world, determined to ruin Alan's reputation and kill those he holds dear, and so Alan has followed him. He hopes to be able to defeat Mr. Scratch and maybe even find a way to return to the real world forever, but his evil alter-ego realising this has trapped him in a time-loop, forcing him to relive the same night over and over again. 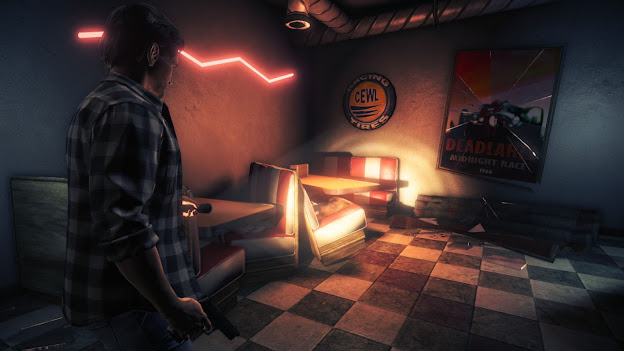 This came out at a time when downloadable games were recognised as micro-experiences rather than fully fledged games. As such there is plenty here that is limited, but the time-loop mechanic gives a way for that to work in the games favour. American Nightmare is split into three different areas, all taking place over one night. The whole game takes place in the deserts of Arizona, with the first area, a dusty motel, being the biggest of the three. The second area is an observatory, with the final area being a drive-in theatre. In each area you have a specific set of objectives to complete to trigger world altering events. The motel section for instance has you setting up events to make a space satellite crash to Earth (to the tune of a Kasabian track) in order to destroy an oil derrick from which enemies are spawning. Each area also contains manuscript pages, these not only provide plenty of backstory for what exactly is going on, and how Wake came to be in the real world, but they also act as a type of currency to open weapon caches in each area. Each area also has its own radio show transmission. These transmissions provide information on what other characters have been up to over the past two years. Best of all are the TVs which contain a live action broadcast from Mr. Scratch taunting Alan. Being a time-loop game you visit these areas multiple times, each time giving different rewards.

Combat is the second half of the game outside the exploration and follows a similar format to Alan Wake. You are armed with a flashlight which must be shone on enemies to dispel their darkness, then using one of the many weapons (quite varied, various types of rifles, shotguns, and handguns, in fact there are more weapons here than there were in the original game). Most the enemies are human looking and spawn around you as you complete your objectives. As you go through the games nine acts more enemy types are introduced, such as giants and bird-men, but even with large numbers attacking I never really felt much threat. Thankfully the combat is fun to do, and despite it all being similar feeling I never once felt bored. Each area has a creepy feel thanks to the perpetual night so I felt on edge even when not much was happening. The story is simple but is executed wonderfully. The three areas all have a different character to talk to and these interactions are just as entertaining as the radio broadcasts, Mr. Scratch video messages and manuscript pages. 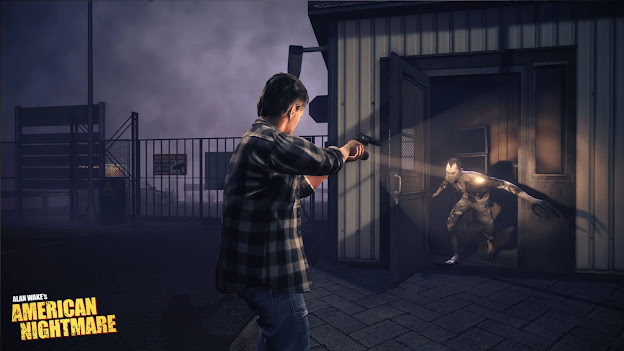 At around three to four hours long American Nightmare doesn't have time to feel repetitive. While you do visit the same areas things have always changed up to keep the game feeling fresh. I loved Alan Wake and so getting to spend more time with the world was a joy that I relished. I wasn't sure before playing this if I would actually enjoy it or not. I needn't have worried though, this is a great little game that works to its limitations. It has gotten me excited to play the crossover expansion for Control, which, at the time of writing this, I shall do tomorrow.