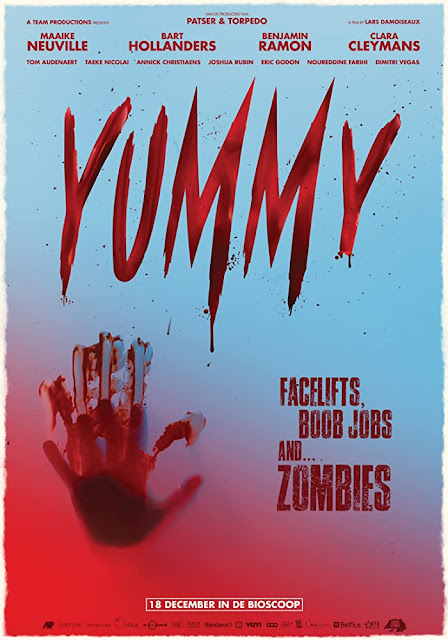 It feels so good to mostly be up to date on my blog. It means that I get to choose the films I watch for review, at least for the time being until a backlog starts to form again. I had my eye for a while on Belgian zombie horror comedy, Lars Damoiseaux's Yummy, and as it is on Shudder I decided to check it out.

Michael (Bart Hollanders) is taking his girlfriend, Alison (Maaike Neuville) and her mother, Sylvia (Annick Christiaens) to a Eastern European hospital so that they can get some cosmetic surgery done. Sylvia is obsessed with trying to stay young, but Alison is there for a breast reduction, fed up of the back pain being large chested has caused her, and sick of the never ending unwanted attention her chest size has gotten her. Michael is worried about the operation being done correctly and ends up causing a scene, so to distract him, the clinic assistant, Daniel (Benjamin Ramon) takes him off on the pretence of giving him a tour of the facility. In actuality Daniel is a junkie who is looking for drugs. His search takes them to a restricted wing of the clinic where Michael stumbles across a bound woman seeming to be in distress, he helps to free her, realising too late there is something very wrong with the woman. It isn't long before the zombie (for that is what she is) has escaped the wing and started to infect the staff and patients. Soon, with the hospital under lockdown, Michael, Alison, Sylvia, Daniel, as well as head physician, Dr. K (Eric Godon) and his assistant, Janja (Clara Cleymans) team up together in order to find a way out of the now zombie infested clinic...

Rather than have a critical look at the folly of unneeded plastic surgery Yummy instead makes little to no comment on it. The female protagonist might want to not be objectified, yet that is exactly what the movie does on many occasions, not only with her, but with quite a few of the other females in the film, there's more than one female zombie stumbling around half naked for instance. While this is a comedic horror it doesn't dial down on the horror part. Truth be told, as the film goes on the comedy gets reduced somewhat, by the films final act the only comedy on show is jet black and Yummy is a lot better for it. This is a nasty film with regards to the treatment of the protagonists, but often that is exactly what you need with a zombie film. On more than one occasion I was really wincing at what was unfolding on screen, from a character whose arm gets jammed in a paper shredder, to someone who has their fingers crushed under a manhole cover (subsequently having to have their fingers sliced off to free them) this is some splatterstick stuff on show (I don't know if that is an actual term, but I mean slapstick with added blood and gore).

I like some dark humour, but gross out humour is far less my thing, and here you have that in spades also. At one point a patient having liposuction has the machines function accidentally reversed to explosive effect, elsewhere you have a very wince inducing scene involving a man and his poor male member, left me gasping with horror! Ok, maybe it was kinda funny, but I can only deal with that in small aounts and there was quite a few moments of gross out humour here. Thankfully the blood and guts always looked great, and is always over the top. I found it amusing that Michael's a hemophobic, yet spends most the film covered in both his own, and other peoples blood. 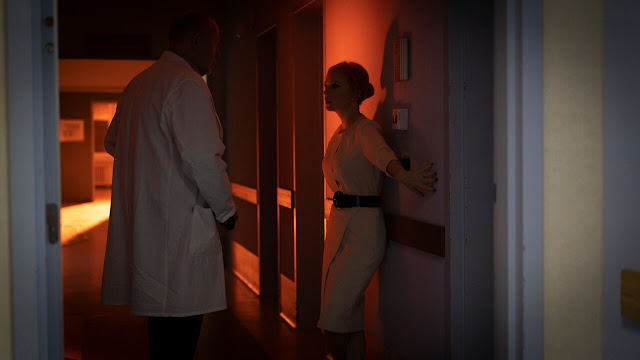 With a film about the undead it is always a good point to comment on how they not only look, but act, and it is pleasing to report the zombies here look great. While they can shuffle around a lot of them speedily scurry around on all fours. These look like diseased disgusting creatures with great makeup effects that help sell such moments as a rib being snapped off a zombie to then stab him to death with, and an axe being imbedded in another one's head. Also had a nicely edited scene of a legless ghoul chasing the heroes down a corridor. At times the lighting, the editing and cinematography combine with the soundtrack to create some really great scenes. These stylish sequences were fantastic, I wish more of the movie had been as consistently great. The soundtrack was good, but at times it feels a little too similar to other zombie films. Notably towards the end a tune kicks in that sounds like a bit of a copy of the iconic music from the 28 Days Later films. Same with some of the effects used, such as a part where a zombie gets impaled on a chair leg in a similar fashion to the garden zombie from Shaun of the Dead.

There was a lot to like with Yummy, it had great makeup effects on the undead, and some really fun moments where everything gelled together perfectly. If it wasn't for so much of the early humour being hit and miss then this would have been a stone cut classic, as it is this was a good zombie film that featured plenty of memorable moments which leads up to a fantastic final third. Yummy is currently streaming on Shudder.