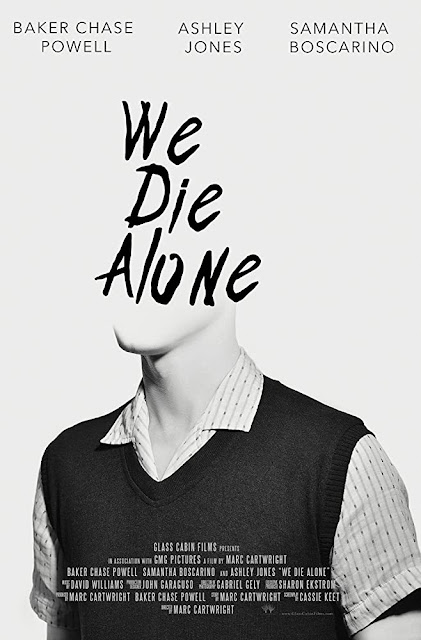 Glass Cabin Film's We Die Alone is an award winning short horror film that was directed by Marc Cartwright (Savor, Sloven), he also came up with the story and co-wrote the screenplay along with Cassie Keet. This deals with the topic of finding love in the modern age, as well as how being socially awkward can impede this search for happiness.

Baker Chase Powell (Irrational Fear) stars as Aidan, a man in a desperate search for love. He is so preoccupied with this that he is oblivious to the attention of his thrift store co-worker, Elaine (Ashley Jones - True Blood). In fact his pursuit has almost become an obsession for him, so much so that he even has a creepy mannequin with which he practices his dinner dates technique on. A chance meeting with new neighbour, Chelsea (Samantha Boscarino - The Clique) makes Aidan believe she may be the one...

I have a low tolerance for awkward situations in films and TV, so much so that there are particular shows I have had to give up on due to not being able to get through uncomfortable scenes. While I did get through We Die Alone (not exactly hard as it was excellently made) there were two scenes in particular where I just had to pause the short and whisper admoninations at Aidan, before taking a deep breath and continuing. Despite the Norman Bates style vibes I was getting off his character there were some elements to him that were easy to identify with. I think a film has been successful when you find yourself wanting to take a particular person to one side and just set their wonky perspective on life straight! While Aidan is certainly the main lead I enjoyed how all the other characters are given enough development to show they are more or less just as flawed as he is. Elaine giving advice that she herself doesn't follow, Chelsea forever on the move, not wanting commitment. The actors were all perfectly cast, which really helped with selling the story. The plot was not as predictable as it first appeared it would be, which was a nice surprise.

We Die Alone was filmed in an attractive fashion. The editing helps create tense moments, and there was some great cinematography going on. There isn't much wrong with this short, the 23 minute run time flew by. We Die Alone is being released on 21st August on Amazon Prime and on Gunpowder & Sky's Alter this Halloween.