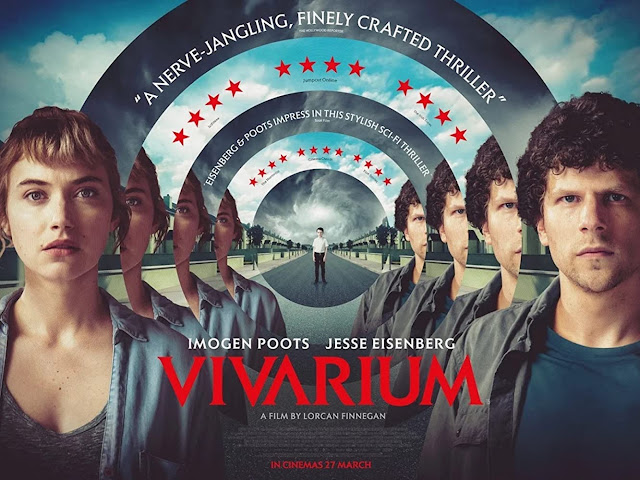 As a member of the Fright Meter Awards committee I was in a group chat discussing what films should be up for nomination and someone mentioned Vivarium. After a little look into this I was quite intrigued about the set-up and so felt I needed to check it out. According to the trivia section on IMDB, Vivarium is Latin for 'place of life' and also refers to a simulated habitat for plants or animals, both of which fit in with the creepy story unfolding here. This was directed by Lorcan Finnegan who co-wrote the story with Garret Shanley, their previous film, Without Name I quite enjoyed.

Gemma (Imogen Poots - Green Room, 28 Weeks Later) and her boyfriend, Tom (Jesse Eisenberg - Zombieland, Zombieland: Double Tap) are looking for a house to move into together and so they decide to check out a local estate agents. The weird agent working there (Jonathan Aris - Black Mirror: Bandersnatch) insists they follow him to a brand new housing estate which he promises them will be where they will find their perfect home. They follow him deep into the development, which is a series of streets of identical looking houses, and are soon given a house to look around in. While their attention is elsewhere the man vanishes, and chalking it up to just an odd experience they go to leave. Bizarrely they are unable to find their way out of the estate, their every attempt resulting in them back at the house, eventually the petrol in their car runs out and they are forced to spend the night in the house. After many days spent trying to escape they come to realise they are trapped. It is not long after that they discover a box in the street outside their home, which appears to contain a newborn baby inside. With no way to leave, the couple are forced to live at the house, kept alive by mysterious food parcels which keep turning up, while caring for a child whose rapid aging suggests a species that is not human... 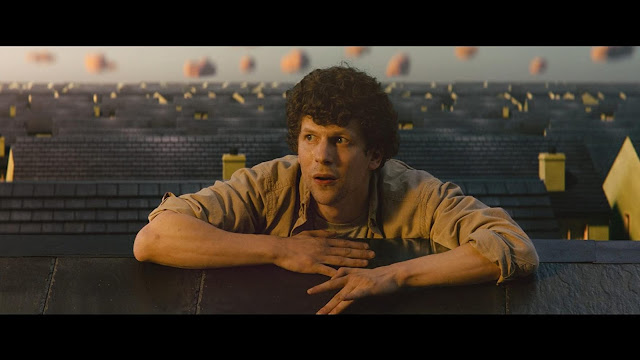 On first reading up about this it sounded like a suburban version of In the Tall Grass, with the fields of grass replaced with the labyrinthian like housing estate. For the film's first act that is an apt comparison, yet the arrival of the child changes things up. The child (mainly played by Senan Jennings - Brute) is both annoying and sinister. It is clear from the films opener of a baby cuckoo being reared by a different species of bird that a similar thing is going on with the couple. The boy always appears to be imitating what he thinks a human should be acting like, the most creepy moments come when he nearly perfectly imitates Gemma and Tom's voices and conversations. This middle act of the film nearly outstayed its welcome, the mystery of why they are trapped fades into the background. As Gemma becomes more and more caring towards the child, Tom becomes obsessed with digging a hole, convinced he will discover answers by what he finds at the bottom. Both actors give a good impression of just what being trapped in such a situation would be like. As the film progresses both characters get more and more depressed and haggard looking, the monotony of their situation grinding them down.

Visually this is quite a dull film once you get used to the setting. This is all very intentional though. the identical looking rows of houses, the sky with the clouds that are suspiciously too perfect looking, the lack of any weather, the food in its bland packaging all create an on paper sense of perfection, but realised in actuality this creates a sense of Hell for the protagonists. In the movie's third act things become a lot more interesting looking, the finale had good use of lighting to really sell some the ideas it was putting out. The story was interesting enough that I wanted to stick around to the end, going by Without Name I figured there would be far more questions than answers by the films conclusion, and I was right. Also, due to how the story is paced out I had a strong idea of how this would end, and I was correct, but I think this was the best way to finish the story.

Vivarium felt like a The Twilight Zone episode developed into a feature length picture, it brought to mind most keenly the episode 'People Are Alike All Over'. I thought this was a pretty good film, maybe the second act could have been cut down a bit, but overall this worked well at creating creepiness by dialing supreme normality up high. Vivarium is currently on Amazon Prime Video to rent or buy.

Posted by Daniel Simmonds at 15:48