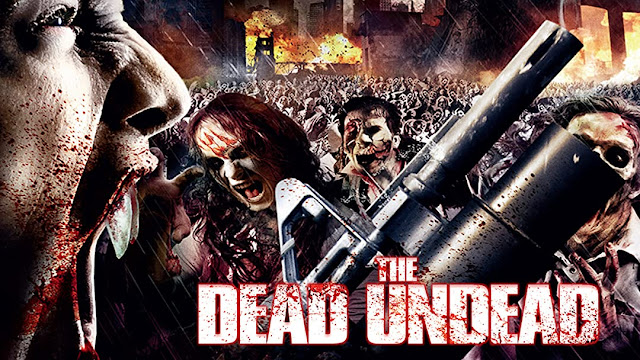 I have my first time off my day job since February and it came to me on Friday evening that I should use my holiday time to get through some of my zombie films and books I have yet to experience. This blog, as the title may suggest, was created to celebrate everything undead. Over time this has spread to include all horror, so it is always nice to dip my toes back into the sub-genre that I so love. With zombie films you hope for one of two things, either that the film is great, or that the film is terrible, anything else usually results complete boredom, but which would The Dead Undead fall into?

A bunch of annoying stereotypical teens pull up at a remote lakeside motel for a weekend of partying, however they soon find themselves assaulted by scores of strange creatures. Luckily for them a team of heavily armed people show up. This group, led by Jack (Luke Goss - Hellboy II: The Golden Army, Blade II), and including among them, Viper ( Matthew R. Anderson, who also co-directed), Doc (Edward Conna, the other co-director, as well as writer of this) and Gabrielle (Spice Williams-Crosby - Star Trek V: The Final Frontier) do their best to save the teens, and while they are only partly successful the survivors are thankful enough. Their saviours quickly explain that these creatures are actually vampires who got infected by drinking the blood of mad cow disease afflicted cattle. Due to this the creatures cannot survive in sunlight, and Jack just happens to know the location of their daytime hiding spot. 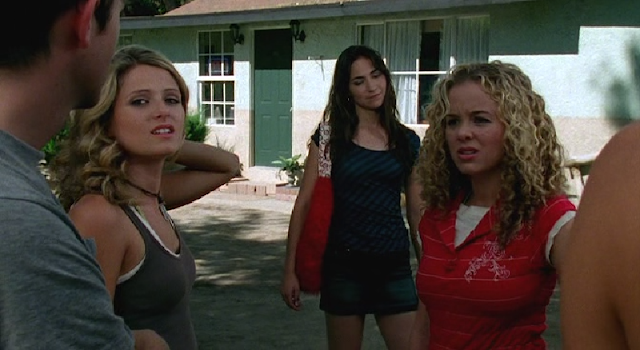 The co-directors of The Dead Undead are both stuntmen. This was the directorial debut of both men and this can kind of be seen with the quality. The film is not a good movie, but it never tries to come across as one. Instead the directors seemed very aware of their limitations and set out to make something that was undeniably fun entertainment. The whole set-up of mad cow disease infected vampires is ridiculous and is an idea that can't be taken seriously. I loved that there was a switch and bait early on with the main leads, all but one of what appears to be the main cast (the irritating teens) are gone before the movie's first act is even over. This is a good as they made the first ten minutes or so the worst part of the film. The armed group are a lot better. It's a slight spoiler to say that it is revealed very early on that they are secretly vampires, but these are the nicest vampires I think I have ever seen. Because they are vampires we are treated to some wonderfully cheesy flashback moments to show how each member of the group first got turned. This includes a trip back to Viking times, the Vietnam War and the Wild West. The inclusion of these zombie-less flashback sequences really added to the stupidity of the movie and were a most welcome inclusion. The Viking scene the best as not only did the costumes there look terrible, but characters still spoke with American accents!

So what of the zombies themselves? Well they are of the running variety, and due to being vampires they have inhuman growls, and all seem able to jump around ten feet into the air. They always show up en masse in lovely scenes of pure action, as people armed with all manner of stupidly powerful weapons mow them down in parking lots, quarries, and woodlands. I loved the explanation put forward in the film that because their lair is so many miles away, and because they can't survive in daylight these creatures (referred to as 'ZVs' - zombie vampires)  have to literally sprint for hours in order to have a small and convenient window of opportunity to attack the heroes in the dead of night, before sprinting back to their base before the sun rises. The more undead in a zombie film the better, quantity always trumps quality, here you have loads and loads of them. Despite their numbers they don't really ever get to do much aside from act as cannon fodder. The majority of the protagonists die by suicidal sacrifices, or by underwhelmingly just turning due to accidentally getting infected blood in their bodies. It would have been nice to see at least one of them tore apart by the ZVs. 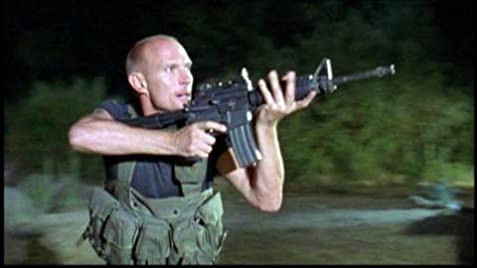 By the amount of people leaping around, and getting blasted back by munitions fire you can tell this film was the work of stuntmen. Added into the mix are a couple of large explosions, and a couple of car crashes. These parts all looked cool enough. There was also a great moment where a wheelchair using zombie gets incinerated, gets out his chair and slowly stumbles forward before succumbing to the flames. The flipside of the effects is a lot of them, especially with trauma to the zombies, come across as looking very staged. A prime example is a scene where Gabrielle takes out a load of the undead with a sniper rifle. Despite the ghouls only shown as perpetually running up to this point, each sniper shot is shown to hit a zombie that is standing dead still, one even has their leg blasted off, yet remains perfectly upright until their head is exploded a few moments later. Quite a few of the smaller explosions involving characters also looked like they were pure smoke, rather than any actually explosion involved.

It is hard to hate on a film like The Dead Undead. Is it a good film? Hell no, was it a load of silly, leave your brain at the door entertainment? Hell yeah. What it doesn't have in pure quality it makes up for with some pure undiluted fun. It isn't going to stick around long in the mind, but take it for what it is and The Dead Undead will scratch an itch.