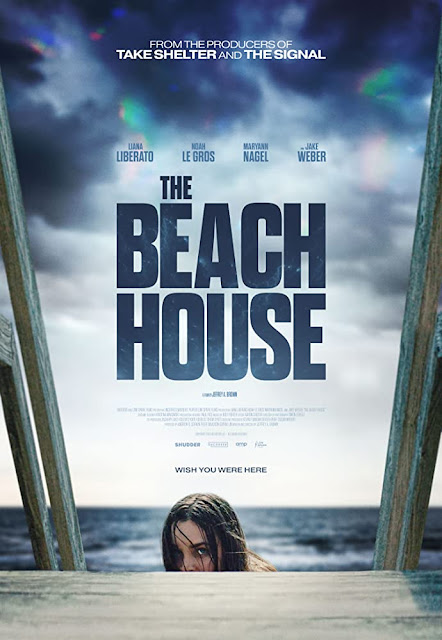 The Beach House is a horror that marks the feature length directorial debut of Jeffrey A. Brown, who also wrote the story for this. It's a contagion horror which is a cousin to the zombie sub genre of horror, and one that initially appears to be a little slow but abruptly falls deeply into events.

Randall (Noah Le Gros - Depraved) has taken his girlfriend, Emily (Liana Liberato) to his father's beachside property with the hopes of repairing their strained relationship. They soon find out they are not the only ones there, Mitch (Jake Weber - Dawn of the Dead) and his wife, Jane (Maryann Nagel), who are friends of Randall's father were invited to go there as well. As there is room in the house both couples decide to stay. They have a night of drinking and drugs and it is during this misty night that things start to go wrong. Emily thinks it is down to the strong edibles they had taken but the next day both Mitch and Jane begin to act very strangely. At the beach Emily stumbles across some aquatic parasitic life forms that have washed up on the beach, and soon starts to realise that the mist they had all seen the previous night may not actually have been mist at all, and that they may be in the midst of a contagion caused by microbes coming from the ocean. 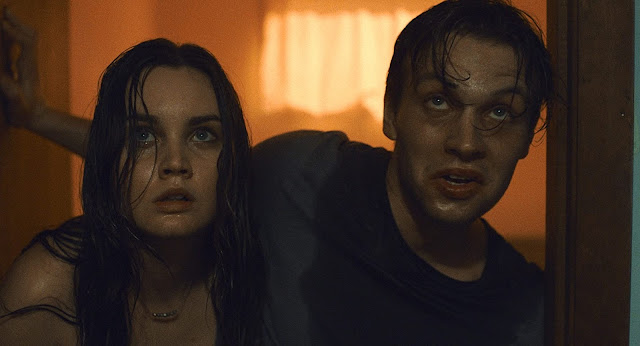 Roughly half of the movie occurs before the characters are aware of any danger, I liked how it all arrives with the onset of them having taken drugs. It leads to some trippy sequences of colours blurring and sound distortion that adds to the increasingly surreal evening, There are only the four proper characters for the film's duration, best of which was Weber as Mitch who came across as likeable. As for Randall and Emily I must be feeling my age, as these fresh faced adults came across as naive, and with Emily too earnest. It is easy to see why the characters are having difficulties with their relationship, though with Emily happening to be doing a degree into aquatic microbes it seemed a tiny bit that a small part of her characters inclusion was to explain what was going on with that side of the story.

With the mist that rolls in at night, and the horrors that brings with it I was reminded of The Mist, this was a relatively more realistic take but the whole having to seal yourself away aspect recalled that. More specifically it really reminded me of a strange zombie short story I read years back, The Hill, by Eric Shapiro. That story picks up some months into a very odd outbreak, and from what is shown here this felt like it was (utterly coincidentally) a prequel to that story. The special effects at times were great, the slimy sludge type stuff that characters puke up, and the parasitic worms look effective. There was one moment when a character has to pull a parasitic worm out the base of their foot, I was distracted by the toes on this fake foot that looked fused together and quite artificial, it did stop my wincing mid-wince! 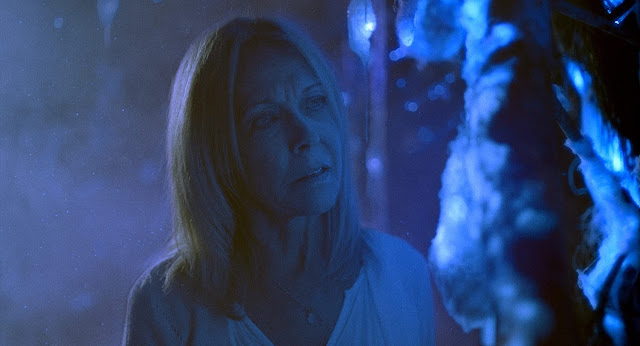 I'm not the keenest when it comes to icky films with insects and creatures like the worms here. Nonetheless I was enjoying this, though it felt like it wasn't really sure how to end. The final five minutes get more and more abstract until the movie just kind of dissolves into end credits. Rather than resolve the story it was like it all just got smudged out. Overall I didn't begrudge my time with The Beach House, but I wouldn't say it is up there with my favourites. The Beach House is currently streaming on Shudder.