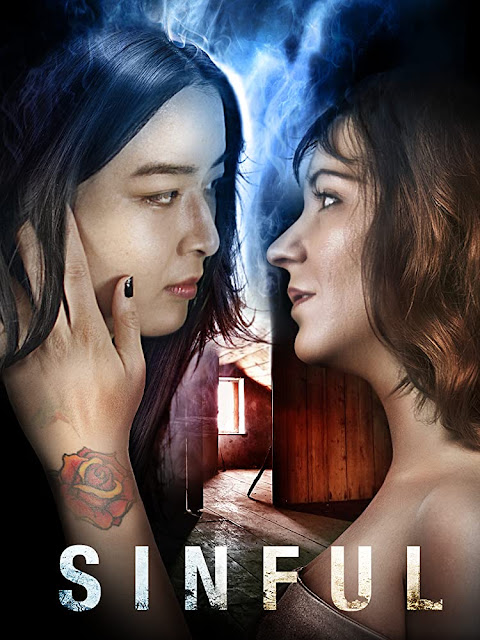 The Coronavirus pandemic has ruined pretty much everyone's year, yet it is good to see how creative types have gotten around the various restrictions in place. UK short anthology, The Isolation Horrors had various filmmakers creating their own little movies. With director/writer, Rich Mallery's Sinful you have a film where the protagonists are not able to leave the house they find themselves in. Whether this idea had already been in development prior to this year I don't know, but it is one which lends itself well to self isolation, and one which was shot during California's stay-at-home Order.

Salem (Nicole D'Angelo - Heartbeat) and her girlfriend, Remy (Christina Lo - Choke) are hiding out in an uninhabited house after having committed some type of crime. Tyler; an acquaintance of Salem, had told them to wait there while he sorted them out some fake I.Ds, but it has been two days and they are starting to get nervous. As the days drag on both start to get increasingly paranoid and anxious, Remy begins to start seeing a masked figure (Chris Spinelli - Choke, Heartbeat) appearing around the house, while both experience vivid nightmares. Could all their problems be down to the stress of the situation and the amount of alcohol and drugs they are taking, or is something far more sinister going on?

I loved the concept of two characters sat around waiting for someone to turn up, kind of like a horror version of Waiting for Godot. With no way to contact the outside world it sets up a good reason for why, despite all that is going on, neither of them ever attempts to leave. With the duo presumably wanted for whatever crime they took part in the paranoia and mistrust feels natural, and so as the horror ramps up over the 75 minute run time it seemed to be heading to a particular conclusion. I expected with just the two characters that Sinful might start to get a little dull, yet this was tense and thrilling in equal measure, admittedly by the hour mark things were getting a tiny bit stale. There is always new information thrown into the mix that really helps keep your attention. Things, such as a previously locked room revealing some curve balls, plenty of sequences that then turn out to be nightmares, and quite a few scenes or instances that only make sense after some context appears later in the films run time.

The actual plot here I enjoyed, and due to scenes being played out of order with no explanation it is a film that would be interesting to watch a second time through. Moments, such as silent scenes of the couple out in the countryside are later shown again with included dialogue which changes up their importance. Throwaway dialogue, and even characters subtle facial reactions are given weight when the puzzle like story is pieced together. By the films conclusion you have been drip fed what led up to their arrival at the house, and a general idea for what exactly is going on, even the occasionally glimpsed masked figure is clevery explained. The layout of the scenes was something I liked, especially with the use of the footage that plays over the end credits, all lovely stuff. The idea for this has been done plenty of times in other films, it is an idea I like, but did lead to the Sinful finale becoming just a little bit meandering.

With just a cast of two speaking parts it was good that both actors did fine jobs. Lo's Remy was perpetually anxious and a bit of a worrywart, Salem a much more relaxed character. The music used worked well at creating a tense atmosphere, Sinful wouldn't have been half the film it was if not for the effect the music has. If scenes had been shown in a naturally flowing order it would have came across as not that interesting. With the way these scenes are edited in and around each other the film was made a heck of a lot more engaging to watch which can only be a good thing. Sinful is available to watch on Amazon Prime and Vimeo on Demand, and is due to come soon to Blu-ray and Tubi, thanks to Mad Sin Cinema.