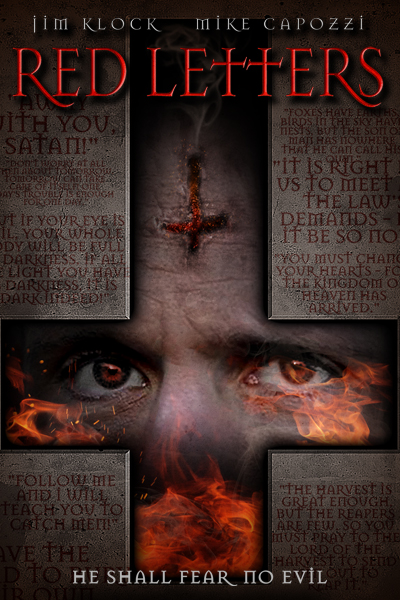 While zombie films are my favourite sub genre of horror to watch I also have a real liking for anything involving demonic possession and so I was please to see Red Letters appeared to fit that bill. It was also nice to recognise a few faces here, this was directed, written by and starred Jim Klock (The Hunt, 6.66 PM, Massacre on Aisle 12). The film also featured a couple of other actors who have appeared in films with him previously, Chad Ridgely, Mike Capozzi (both 6:66 PM and Massacre on Aisle 12) and Robin F. Baker (6:66 PM also). I have only ever seen those actors in comedy horrors before so I was intrigued to see how they would come across as in a serious horror.

After a deputy goes missing in strange circumstances in a small town the sheriff contacts private investigator, Jim Knowles (Klock). The F.B.I believe the deputy has faked his own disappearance, the sheriff not believing this wants Jim to do his own investigation. Jim has a friend that he often brings with him on cases, Mike Gaston (Capozzi), Mike has a special ability to sense the fate of people by holding a photo of them and Jim hopes this will allow him to find out what has happened to the missing person. The deputy vanished in a notorious local hotspot that local rumours say is a place of evil. Being an atheist Jim hopes that Mike, who is deeply religious will also help to decipher some of these legends about the place. 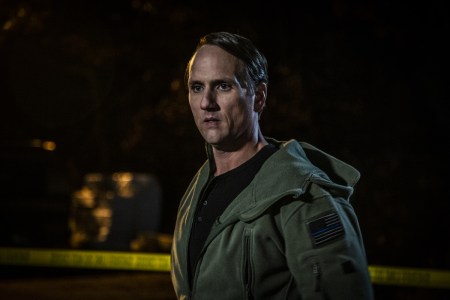 Red Letters does a heck of a lot with very little. Despite the story that is grand in scope the film only features a handful of characters, with Jim and Mike appearing in nearly every scene, and often it is just the two of them talking to each other. It was interesting to see how an indie film was able to tell what in other films would be a special effects laden, and populated storyline. You can see some of the concessions to the budget straight away. At the films onset Jim and Mike are sat in a nondescript room talking about their new case, the whole reason for them being there told as a backstory rather than shown to the viewer (aside from the found footage style prologue). At times this way of filling in events with dialogue impacts on the movie in a slightly negative way, in particular with a case the crime solving duo teamed up on in the past. This case, that featured a Satanic cult named 'Legion' sounded really quite exciting and is spoke about often. I found myself wishing the film was showing that story rather than the far more subdued and mostly uneventful one the characters find themselves involved with in the present day.

After a promising start that showed surveillance footage of the missing deputy getting dragged into the apparently cursed building of local lore there is a huge wait until more horror occurs. The first fifty or so minutes of the near hour and a half film have the two interviewing three different people, the only horror moments come when Mike has his brief visions of various victims of past and present cases. I found the dialogue, especially early on to be quite generic and cliched. It may possible be due to only having seen the main leads in comedy horrors before and so subconsciously hearing their lines in a comedic fashion. Still, as uneventful as these interviews are they do help bring some questions into proceedings. Ones such as why the deputy's best friend (Ridgely) seems to be hiding something, why the devoutly religious wife of the deputy (Kyra Kennedy) happens to have a very non-christian books in her home, and if local madman, Robin Harley (Baker) can really hear the voice of God, or if he is just plain crazy. These questions kept me involved with the storyline to see if they were just neatly placed red herrings or if they actually meant something. With regards to Robin I did find it amusing that the trope of taking a homeless man to a diner to get a decent meal in exchange for information occurs, but this then cuts to a scene of the men sat around a diner table while Robin is finishing off a meal that appeared to consist solely of a crisp sandwich! As important as this scene was it was hard to take it seriously with that odd detail distracting my attention. 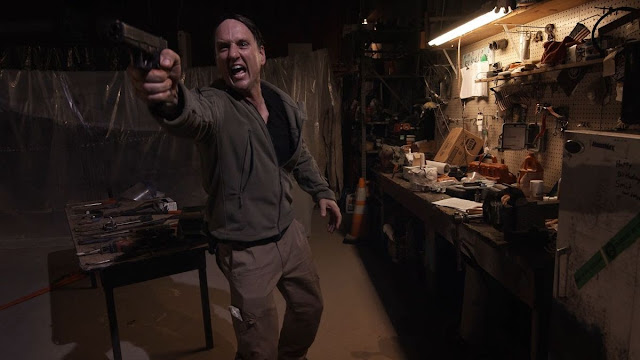 It is the films third act when the story really starts to come together. I found the explanation was revealed in an interesting way, I also liked how Klock managed to sell this third act despite still only featuring the two main characters, it required some imagination on the viewers part but I think it did work. The actors all fitted into the traditional roles required of a demonic possession crime investigation movie even if at times elements seemed a bit dumbed down. For someone who has had previous experience of investigating Satanic cults it felt a bit strange that not only did Jim not know what 'Old Nick' was a reference to, but he also didn't seem to realise what the word 'Legion' referred to.

Red Letters is one of the more basic demonic possession films I have seen, yet that doesn't mean it is the worst. I have seen far worse films of this type with much higher budgets (Incarnate springs to mind) at least this was engaging with the story it was trying to tell. Red Letters premiered exclusively on the Kings of Horror YouTube channel on 21st August, thanks to Terror Films.

Posted by Daniel Simmonds at 12:40