One Cut of the Dead (2017) - Comedy Zombie Horror Film Review 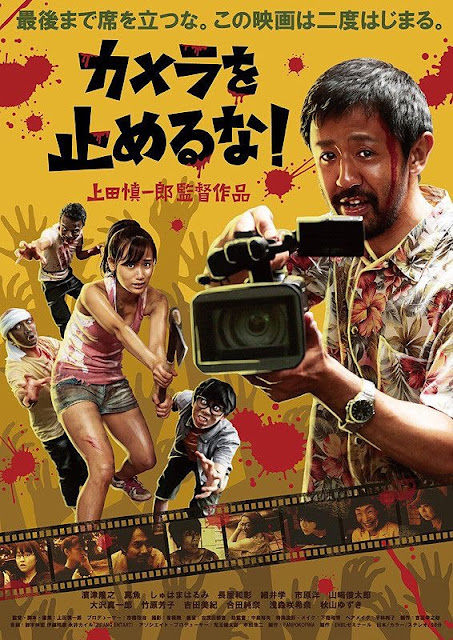 I had been wanting to watch Shin'ichiro Ueda's One Cut of the Dead (original title Kamera wo tomeruna!, meaning 'Don't Stop Shooting!') for quite some time now, having heard nothing but good things about it. With all I had heard I was surprised that some big twists and turns within the plot had not been spoiled for me, and so I wasn't prepared for the direction this found footage zombie horror comedy went in.

Takayuki Hamatsu stars as Director Higurashi, a passionate film director who is in the middle of shooting a zombie movie at a disused warehouse. He is frustrated with his stars, at the lack of believability they are bringing to their roles, especially with leading lady, Chinatsu (Yuzuki Akiyama). Luckily for the director, but unluckily for everyone else an actual zombie outbreak somehow occurs. Despite the unfolding horror the director insists that the cameraman keeps rolling. As cast and crew alike flee from the undead, as well as fall victim to them, Higurashi is in his element, convinced this will be the most realistic horror film ever created. 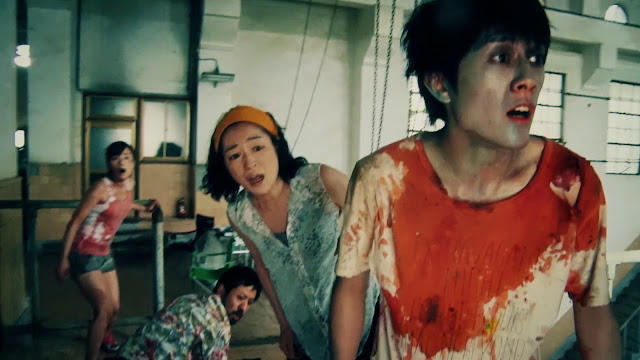 The first 37 minutes of One Cut of the Dead does exactly what it describes, a single unbroken shot that hints at a masterclass of behind the scenes action. Unlike other examples of this that use clever techniques to secretly break shot this one is constant (apparently it took four tries to perfect). This includes all the practical special effects, such as characters being swapped out for fake bodies. At one point the camera itself gets blood on it, and is wiped away in reality rather than an effect added in post production. As a movie fan I thought this was so cleverly done. Sure, there are moments where scenes play out in a fashion that appears a little dragged out, but is understandable when you imagine what the hectic behind the scenes must have been like.

This is just one part of the 96 minute horror and I was bowled over when I realised where this was heading. Without getting into spoilers, I thought the middle of act of the movie suffered ever so slightly for being a little disappointing, I was not sure I liked what happened. This is all brought back together for the final act which becomes manic, and strangely (for a horror comedy), feel good. I thought the cast of characters were a fun bunch. The crazed director brought pure energy each time he appeared on camera, and this character brought with it a lot of the humour I had hoped to see. There are no end of times zombies suddenly burst into view, but my favourite moments where when the director suddenly appears, a gleeful look on his face as he yells "Action!" into the camera. The rest of the cast all do enough to stand out, and it was fun how they both got to play characters, as well as then having those characters playing other ones within the context of the film being shot. Of course, being Japanese there are subtitles, but this wasn't a film heavy on dialogue and the translations for the most part read decently. 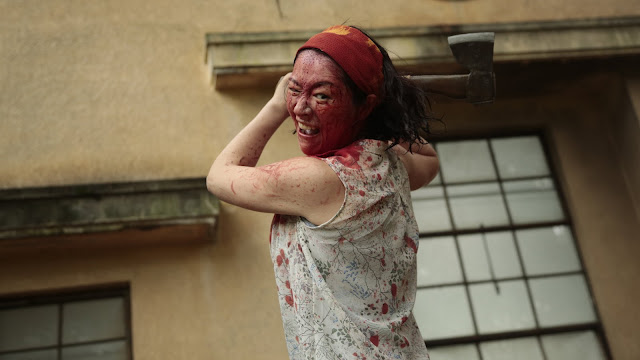 The best way to go into One Cut of the Dead is to go in with no knowledge at all of what was going to happen. While for me it wasn't totally the horror comedy I expected it to be, the film does a good job of really standing out. There really isn't many films out there as cleverly planned and executed as this one. One Cut of the Dead is currently streaming on Shudder, so if you are into your comedy zombie films then check it out and see what the fuss is all about.