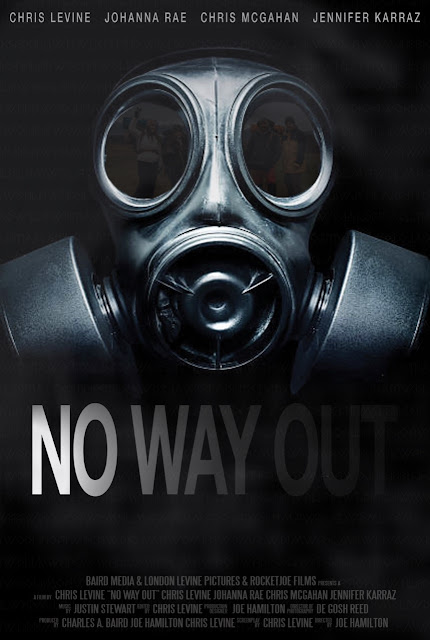 No Way Out is the directorial debut of Joe Hamilton (production designer on The Frankenstein Theory), the story for this film done by Chris Levine, who also plays one of the main leads. The film tries to tell its story in a way that the viewer mostly only really ever experiences what the characters are witnessing. While this makes what happens creepy, it also makes the lack of any real explanation a tiny bit frustrating.

Kyle (Christopher McGahan - Virus of the Dead, segment 'Life') and his girlfriend Norah (Jennifer Karraz) have gone away on a camping trip to Alaska with their friends, Blake (Levine) and his girlfriend, Jessica (Johanna Rae - Apocalypse Rising, The Amityville Harvest). Kyle wants to go as he secretly plans to propose to Norah, Blake on the other hand openly hates camping, but feels it will do his struggling relationship some good. As a child his family lived in remote Alaska, something terrible involving his father happened back then, so this is the first time he has returned since moving to the city. Their first night in the wilderness they encounter an angry man wearing a gas mask, then after the second night they awake to discover their tents have been attacked. This is just the very start of the friends troubles... 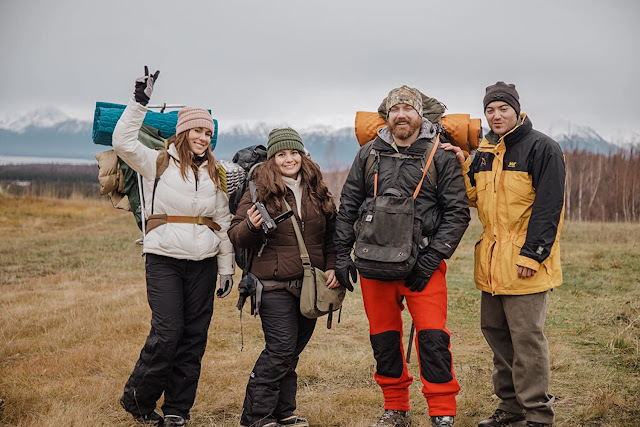 By having the focus on what characters were witnessing themselves a lot of the horror happens behind the scenes. This led to a bit of a disconnect with characters seeming to act a lot more freaked out than I felt. Mainly I was confused as I was never sure if the group where actually being stalked or if it was in their heads. It uses a similar idea to The Blair Witch Project in that the camera rarely picks up on the horror, instead the suspense occurs due to such things as characters who vanish into thin air overnight and them picking up on cues that I (possibly being dense) didn't notice. It also sometimes slips into first person perspectives of the apparent gas mask man still haunting the group. By No Way Out's conclusion I really was a bit lost, the general story beats were there but I was full of questions that hadn't been satisfactorily answered (again, this could be me being dense!). I have to admit that coming back to this review after a day away from the film I have now kinda pieced together my own explanation for what went on.

More successful by far was the wonderful location, the hikers walking across fields and through woods brought back memories of the beginning of The Ritual. This included some beautiful cinematography, and some really nice looking tracking shots of the four campers walking across the landscape. Adding to the lovely atmosphere was a really strong score, the music managing to come across as mysterious, adventurous, and slightly sinister all at the same time. There wasn't a single moment of the movie where the music was anything less than stellar, and so it was a real highlight for me. Initially it seemed No Way Out might be a found footage horror, but instead it is a satisfying mix of both styles, mainly it is shot traditionally, but on occasion it slips into hand cam footage for particular moments.

The four main cast members had the burden of carrying the majority of the movie, it was good that they worked well against each other. As confused as I was with some parts of this I was never bored, even if I could never get entirely on board with the predicament the characters were meant to be in. Special effects are kept to a minimum, but when they are needed they are perfectly adequate. No Way Out is an attractive horror that creates a good feeling of atmosphere, however the slightly barebones plot left me wanting just a little more.

Posted by Daniel Simmonds at 13:37