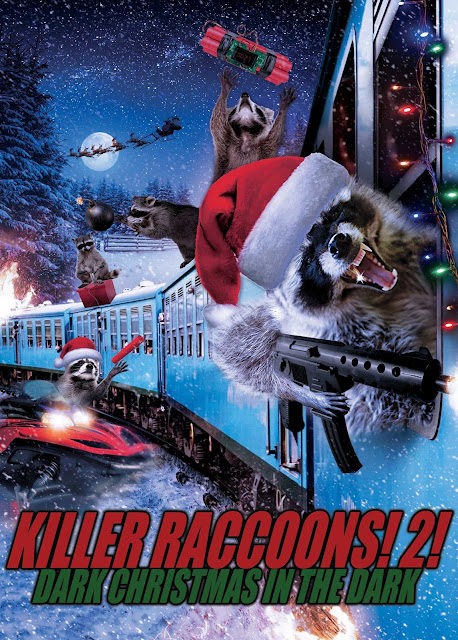 You might wonder what a comedy action film is doing getting reviewed on this blog when it doesn't really have much to do with horror. Well, it is the sequel to Travis Irvine's 2005 comedy horror film Coons! Night of the Bandits of the Night. The humour is very low brow, the effects terrible, and the acting questionable, yet there is some charm with this, and it actually works very well as a sequel.

It is ten years since the events of the first film in which a weekend of partying at a camping ground turned into terror for a group of college kids when they were attacked by a pack of rabid raccoons. Since that time, one of the only survivors, Ty Smallwood (Yang Miller - Arcadia) has been locked up in prison for underage drinking. Upon his release he agrees to meet up with the sister of his deceased girlfriend, to tell her exactly how her sister died during the raccoon incident. They meet up and get on a train out of town, but it just so happens to be the target of a group of terrorists. The terrorists are made up of highly trained raccoons and led by Ranger Danger (Mitch Rose) and a group of other men who were all believed to have been killed during the climactic battle in the first movie. They want revenge not only for the government cover up which led to them having to fend for themselves, but also because the local Mayor at the time teamed up with the government in order to turn the campsite into a training ground for the vicious raccoons discovered there. Ranger Danger has hijacked the secret weapons satellite known as PEN15 and intends to use it to destroy Colorado where the former Mayor is now stationed... 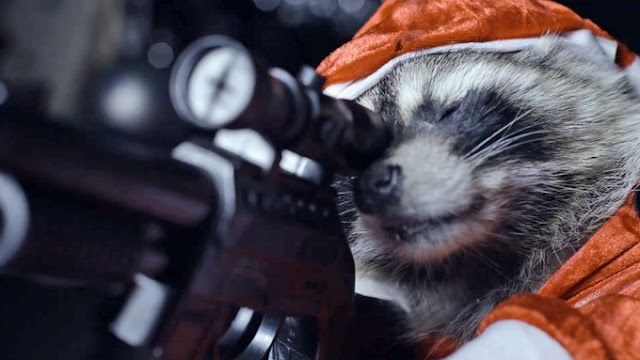 I had never heard of the first film in the series, and due to the title being completely different it took a while to find details of it. Killer Raccoons 2 works very well as a sequel, it features many returning characters (even if only a few of them are actually played by the original actors) and plays off of the things that occurred there. I particularly liked the idea of people presumed dead back as bad guys, angry at being forgotten. All of the non-raccoon bad guys are covered in scars, and each one has an eye patch giving them a unified look. While much of the comedy wasn't to my liking I did enjoy each time one of these men were killed that as they die they gurgle "I'm dead, for real!". This is a film where you would get so much more from this if you had seen the first one. As for me, I read a few different reviews of that to piece together the story, and paused this one on quite a few occasions to check IMDB to see if not only characters had returned or not, but also to check the actor names to see if they were reprising their roles or not.

The horror of the first film is all gone now, with this being very much an action comedy. The vast majority of the movie takes place on the moving train, with Ty as the hero able to use his previous experience to take on the raccoons. As you might expect the creatures look terrible, purposely so, they don't do much more than shake around, and get in fights with the human characters in which the actors are obviously just waving the puppets around. They are armed with tiny SMGs and there is kind of a running gag about how silly these tiny weapons are. Gunfire, as well as much of the sparsely used blood looks very CG, yet for a film like this that is just another element of the humour. I expected lots and lots of dick jokes, and that is a good 70% of the film. Even the non sex based jokes didn't ever really land well, from goofy, yet annoying voices to jokes that seemed to be lifted from the Austin Powers movies it was all bland. The third act really does pick up in terms of quality, most of this final act wasn't bad at all, it includes plenty of action, and a fight scene between Ty and a bad guy that was actually funny due to how pathetically they were both trying to fight each other. 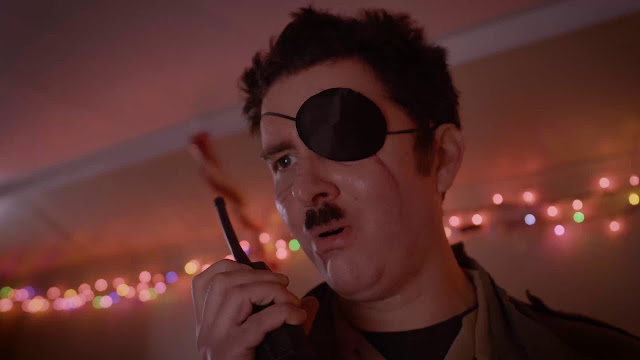 If you somehow saw the first film then you need to check this out. For everyone else, you can probably tell already if this film will be for you. To be honest, as unfunny as I found it, it passed by without me ever feeling bored. The effects on occasion look so bad as to be good, it was just let down by a very dull and forgettable soundtrack, too many characters who irritated rather than added anything, and the juvenile humour. I did think Miller made for a great protagonist though. Killer Raccoons 2: Dark Christmas in the Dark has been released digitally by Indican Pictures, with a DVD release due for 1st October.