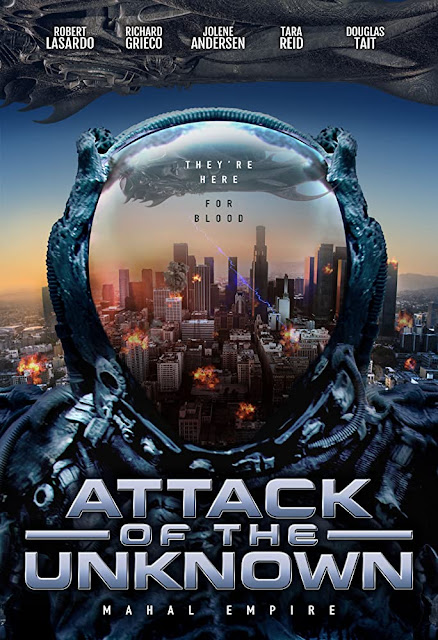 Attack of the Unknown is a sci-fi action horror that gets around its budget by having a huge alien invasion occur, but then has the focus on a small group of characters as they try their best to survive. This was directed by Brandon Slagle (The Dawn, Area 51 Confidential) who also wrote the screenplay based on a story developed by Michael and Sonny Mahal (producers who also came up with the stories for Art of the Dead and Party Bus to Hell).

A SWAT team transporting a high ranking cartel member, Hades (Robert LaSardo - The Human Centipede III (Final Sequence), In Hell) to a detention centre in Los Angeles get their plans interrupted by a sudden UFO invasion. With the city swiftly invaded by near indestructible aliens the team, that includes among them, Vernon (Richard Grieco - Art of the Dead), and Hannah (Jolene Andersen - voice of Ada Wong in the Resident Evil 2 video game remake) take refuge, but soon find themselves up against the deadly blood drinking Earth invaders... 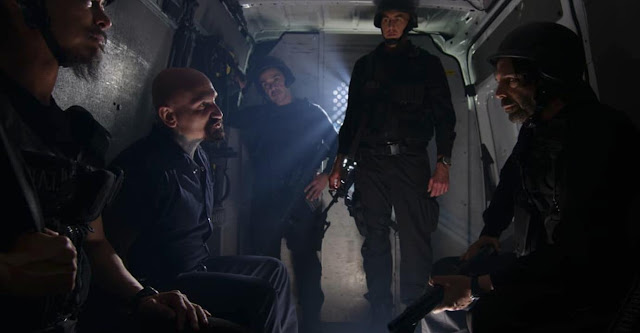 From the location alone I was reminded quite heavily of Battle: Los Angeles, but this film does things a little differently. I thought the idea of following this SWAT team who were just trying to survive, rather than soldiers directly battling the alien threat was a neat one. The story wasn't concerned with some Independence Day style war to repel the invaders, that was all occurring elsewhere. Instead this was an intimate look at just some of the people in the city that day. The opening act of Attack of the Unknown played out like a cop drama, with an assault on a criminals hideout. It was a wild turn then when the aliens show-up. The groups SWAT training meant they were better prepared than most. While I didn't catch the names of most of the team, Vernon and Hannah stuck in the mind, as did the comedy character who joins them in the form of a video game obsessed blogger. Despite not knowing most of the names I did enjoy the camaraderie of the SWAT team, and the enjoyment of wondering which of them would be next to fall prey to the villains and aliens they are up against.

A lot of the effects were CG, but things such as the UFOs didn't look bad at all. The worst looking of these effects were the aliens tentacles that they shoot into their victims. As to the look of the aliens themselves, they had a pretty cool design, and the way they walked reminded me of UFO films of the 1950's. There is a lot of shooting in the film, most characters are permanently armed with guns and forever using them. The gunfire was all decent, though the actual effects of the bullets hitting their targets always felt a little wimpy. It doesn't help that for all the aliens here only a couple of them ever get injured, the majority are always shown with bullets bouncing off their armour. This led to the middle act of the film getting a little monotonous. As much as I thought the Assault on Precinct 13 type plot was good at localising the invasion to a set point it also led to a bit of tedium when the same characters are constantly fighting the same aliens without seeming to be able to make any impact on them at all.

The story was interesting in that there is no overarching plot to stop the invaders, which actually made this feel a little different. Some of the smaller story beats did come across as feeling a little odd. One example is the SWAT team desperately trying to get Hades to tell them an old legend he once heard, with the characters acting as if this was the most important thing they had to do. Sure, the story he tells does seem to give background detail on the invaders, but felt a bit random this one guy would just happen to know this. The third act picks up events a bit, a fresh new location helped bring some extra energy back to the proceedings.

Despite my attention flagging a little bit in the middle of this film I still didn't think Attack of the Unknown was a bad movie. The one hour forty runtime maybe felt a little long for what was happening here, but as someone who wouldn't say alien invasion things are really my thing, it was entertaining due to the high concentration of action, the grand scope of the invasion, and great creature design. Attack of the Unknown is due for release on August 28th.