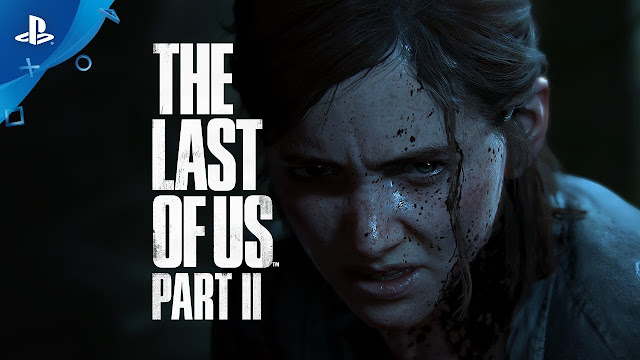 The Last of Us is one of my favourite horror video games of all time. It had a mature story, featured some top notch acting, looked and sounded stunning, and of course featured the undead. Many people, me included felt it ended perfectly, that a sequel featuring the same characters could only ever fail. When I heard The Last of Us Part II was in development I took a decision to not read or look at anything about it at all. I saw the teaser trailer many years back, but after that I didn't so much as even look at a screenshot. That has served me very well here as things play out very differently to what I expected, my expectations were surpassed on many occasions. There were even moments during this when I felt for sure it was going to get the top 10/10 score from me. As it was, this is indisputably a stunning game, which has just a few things that stopped it from reaching that top score. Needless to say, there will be spoilers for The Last of Us here, as well as that game's DLC chapter, Left Behind. If you have yet to play that game I implore you to. I will also state that if you have any intention of playing The Last of Us Part II then maybe stop reading here. I don't intend to give any story spoilers away, but I can't write about this without taking away a little bit of what makes playing this so great with virgin eyes.

The game takes place in post-apocalyptic America in which a mutant Cordyceps fungus has mutated much of humanity into violent zombie like creatures. This takes place mainly 5 years after the events of the first game, which itself took place 20 years after the end of civilisation as it was known. Ellie (voiced by Ashley Johnson) and Joel (voiced by Troy Baker) are now living in the settlement of Jackson. One night a group of WLF militia (Washington Liberation Front) infiltrate the defence lines with a singular mission to achieve. They are successful, and their success results in Ellie, as well as a few others heading to the WLF's place of origin, the city of Seattle, to get revenge.
Arriving at the city, Ellie discovers the WLF are deep in the middle of a war with a cult nicknamed the 'Scars'. With her singular mission to achieve, she sets out to kill all those she holds responsible for the atrocity committed at Jackson... 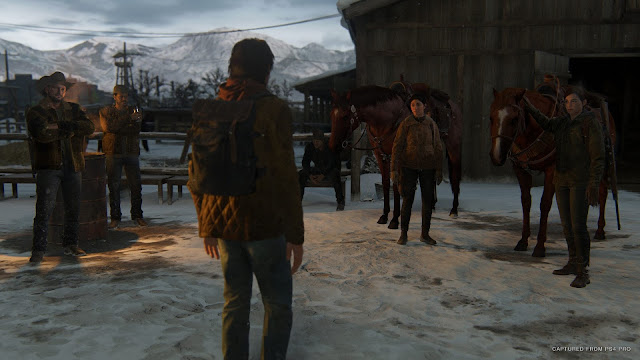 It shouldn't be too much of a surprise, but boy, this is one bleak game! The games opening few hours lull you into a sense of false security. This part of the game had me feeling multiple emotions minute to minute. It even made me laugh out loud at one point. The original game worked well to achieve a balance between the horror of the world and friendship bonding. Ellie and Joel's journey brought with it a legitimate feeling of trust building and respect. Here characters are already established, and with revenge being such a large theme of the game there are not as many simple moments of curiosity and discovery. That first game saw you play as the middle aged Joel for the vast majority of the game, you only got to play as Ellie on a couple of occasions. It was due to that, that I didn't mind this time around Ellie is the main focus. That first game was Joel's, this one is very much Ellie's. The game does a breathtaking job of forcing you to see events from the antagonists point of view, sometimes even complicit in their actions (it isn't much a spoiler to say that nearly immediately you are put in the shoes of the main antagonist during the games opening chapter for a time). These bad guys have hopes and aspirations, they have story-lines going on outside of Ellie and company's quest for retribution. The main plot may be serious and bleak but there are still moments of levity dotted throughout the game, even if these mainly take the form of flashbacks that show what Ellie and Joel had been up to in the five years since the end of The Last of Us.

The vast majority of the game takes place in Seattle. With the first game spread out over a year, taking in many different places and seasons I wondered if boredom of having just the one location would occur. Thankfully I can say that this doesn't happen, by the skin of its teeth this is avoided. Comparisons are always said to be a lazy way of describing media, but I would say this game is what would result if The Last of Us and Spec Ops: The Line had a digital baby. The deeper into the city Ellie gets the darker and darker the events. As a character she goes to some jet black places morally, with her experiences twisting her into somewhat of a monster. As a player I felt justified with her anger, I would often find myself having to remind myself just why she was trying to do what she was.
That's not to say things didn't have an effect on me. By the conclusion of the Seattle story I was really done with killing, all the violence had worn me down and I found myself purposely using stealth (successfully) to avoid any and all combat. This game does a tremendous job of getting you in the mindset of the characters you play as (like the first game this isn't just the one character, you get to play as others at set points). This brutal plot is one area that marked the game down for me. This remains bleak all the way up to the end, it nearly got to the point at times where it felt it was being bleak for bleak's sake. It got to the stage where I was feeling nervous about playing the game. I loved it and wanted to get back to it, but I was also exhausted emotionally and feared for where things were heading. 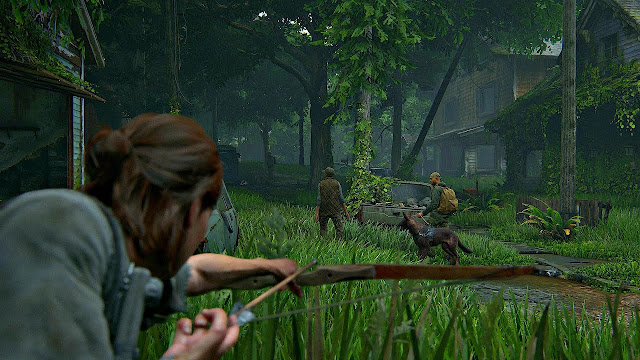 Another area that led to this getting a 9/10 instead of a 10 was the gameplay. It is fantastic and plays like a dream, yet it never does enough to elevate it from the already great gameplay of what came before. This has a loop of you exploring ruins, banks, coffee shops (so many coffee shops!), office buildings, apartment blocks etc and moments where it is pure combat. Combat takes the familiar form of either battling zombies, or battling humans. Very rarely you get to mix both enemy types. Much like the first game I would have liked more zombies, though their inclusion here led to some fantastic moments. You have 28 Days Later style moments where hordes are chasing you through scripted linear pathways. You also have more stealth based moments, including one that felt like it was the end of World War Z transported into a video game. With the human enemies, it was a nice touch to have enemies refer to each other via their individual names, it gave more weight to your actions. There came a time when I was starting to get a little tired of the format of this game. Then something stunningly unexpected happens that brought a new leash of life to this. This idea has been used before unsuccessfully in video games, but here it finally works. There are few things better than thinking you are at the end of a brilliant video game only to realise it was a fake out and there is still plenty of time left. This happens not once, but twice here, both times I was bowled away to realise the game was nowhere near finishing.

So, this is a third person adventure game, enemies can be stealth killed, but there are also plenty of weapons to collect, most of which can be upgraded. Weapons include a rifle, shotgun, bow and arrow, revolver and pistol. Along the way you also gain a suppressed SMG, a flamethrower, and a crossbow as well as a few others. Collecting scrap parts and medicine lets you upgrade your weapons as well as your abilities (nothing too major). There are also plenty of letters and notes that add world building to the stunning locations. I loved how the perspective of events gets twisted. You read things early on that make you think one way, but later events twist your knowledge into something new. The Last of Us Part II is a very attractive game, the graphics, especially for environments is often not much short of stunning. There is so much detail to the places you visit, asset reuse happens of course, but there are seemingly thousands of little details that only pop up in the one location never to be used again. It makes the city feel like a real place, as dilapidated and destroyed as it is. That isn't even to mention the wonderful glass effects, windows shatter realistically, and the use of the rope brings with it a delightful use of the physic engine. 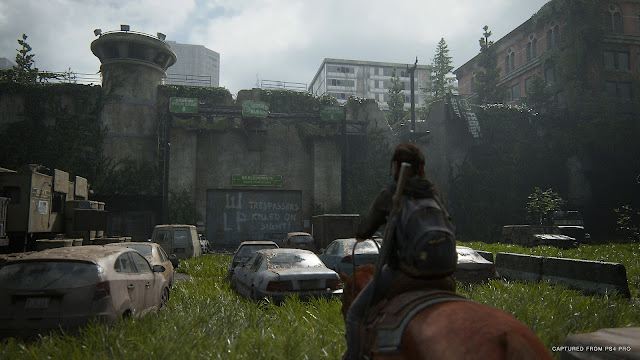 The gameplay loop may be obvious to see but the sheer scope of what you get to do always impressed. Traversing the rooftop of a skyscraper from the perspective of  an acrophobic felt close to home, as in real life I am terrified of heights. Other moments include the battle to reach a distant sniper, something the first game did also, but here it is expanded upon. You also get to traverse the closed off wing of a hospital, work your way down a gutted apartment building, journey via speedboat and more. The variation is far more than it at first appears. As previously there are a couple of boss battles, including one that would have felt at home in The Evil Within. Along the way characters add in incidental dialogue. The characters themselves are a varied bunch, and with Ellie being established as gay it felt refreshing to play as someone who isn't your traditional hero or heroine. There are a lot of mature themes in the game, again brought to life with the perfect voice acting. This includes a couple of sex scenes, handled about as well as you would expect, but still a small step up from previous console generations attempts to show this. The overall theme of the game is about the cycle of revenge and how it can be broken away from

In a year that has been fantastic for gaming (Doom Eternal, Animal Crossing: New Horizons, Final Fantasy VII Remake to name a few) The Last of Us Part II still stands out as the best video game I have played this year. It may be a bit too heavy and depressing for its own good at times, but I was still addicted to this. It is a dream to play, and it manages to make you feel so many different emotions with its deep story telling. I loved this, almost better than the first game, and that is saying something.