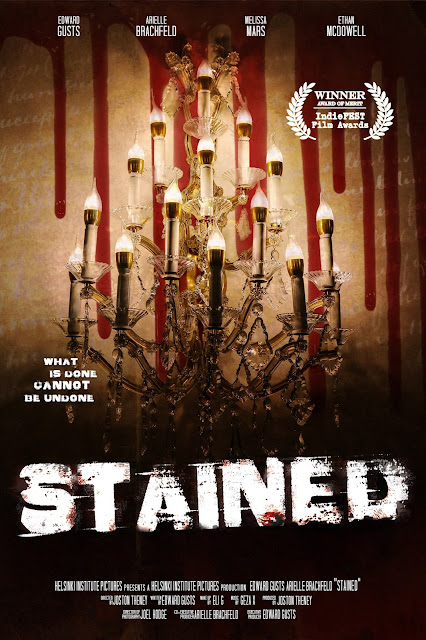 Stained (also known as The Letter Red) is a horror that came from director Joston Theney (director of the Axeman series). I don't know if it was due to being hungover today (got drunk for the first time since pre-pandemic the night before I wrote this) but I really struggled to make head or tail of what on Earth was going on. It was two thirds into the run time that it all clicked and I finally understood what the film was actually about.

John Macbeth (Edward Gusts - Alien Expedition) is distraught when he learns the long promised for pay rise at his job is not going to materialise. During an argument with his boss, Gregory Duncan (Theney) he kills him, and ends up dumping the body in a nearby river. Returning home to his wife, Jane (Arielle Brachfeld) she is delighted with what he has done to secure their future, and uses his new murderous streak to her advantage. John becomes the new boss of his company, but as things begin to unravel he has to take more and more drastic actions to stop the police from discovering his many crimes.

My mind just could not understand the film at all to begin with. Characters seemed to be extremely over acting, so much so that it felt like they were aliens inhabiting the skins of humans and trying their best to seem normal. It was also bizarre how John and Jane seemed to both independently go insane at the same time. It made for an intense killer couple, but also seemed to make little sense. Once I got past the 80 minute mark I suddenly realised that Stained, rather than an original story, was actually a very loose modern day remake of Shakespeare's tragedy, Macbeth! In school I studied The Merchant of Venice, King Lear, and Hamlet, but not Macbeth. Due to this I had no idea what the original story was all about and so much of this movie was lost on me. It sure retroactively made sense why some of the characters seemed so insane. The three women fawning over Macbeth constantly were obviously the three witches, and after a quick summary of the plot of the old play it became clear many characters shared similar names and roles in both the play and this reimagining. It was only once I deciphered the films intent that I began to enjoy it, but that could only go some way to repairing the films first two acts.

Stained is a nasty film with some dark events alluded to. Anyone who knows the original story will know this. It features a few scenes that I found uncomfortable to watch, especially one with a heavily pregnant woman. There is plenty of blood and violence which did make for some nice scenes. A fight midway through the film was one such example. I never really understood the look of John. The more he goes down the path of murder the better he started to look. Initially he has a thick beard, covered in bruises, and had a silly looking bandage wrapped around his head, by the films conclusion he looked a lot better. Jane was far more of an interesting character, especially the moments when she manipulates those around her. I did like that the film begins at the end. As police storm the Macbeth's household they stand together hand in hand, before Stained abruptly skips back two days to show how all this came to be.


There is an often confusing flow to the events, it seems at times the film both skips forward and backwards during scenes that made for some confusion. Add in not only hallucinations, but also reoccuring dream sequences and it all led to moderate bewilderment. Still, one area I did appreciate was the soundtrack, or more specifically the licenced music which always helped create atmosphere the handful of times the well chosen songs play out. In general I could never tell if characters were speaking really quietly or shouting too loudly. I found myself for much of the film with my foot on the volume switch, constantly having to turn it up or down depending on what was going on. I couldn't hear much of what characters were muttering to each other, but then there are the occasional moments where characters really shout very loud.

Stained was certainly something quite different, which is strange to say about a movie whose plot was taken from a 400 year old play. I don't know if I had known going into this that I would have gained more enjoyment from the first two acts. I am unsure about much of the acting here, I could never tell if it was purposely hammed up or if it was just down to bad casting choices, either way the style left me a little cold. There are some decent moments here, but it was mostly a little bit too strange for my tastes. Stained is available to watch on Terror TV.