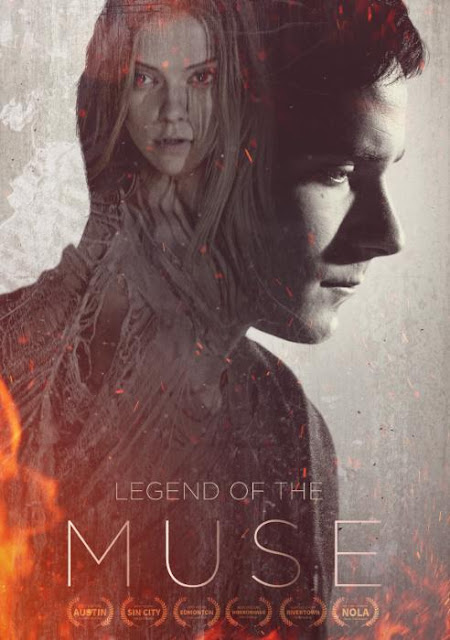 Legend of the Muse (originally released in 2017 under the name Muse) is the directorial debut from John Burr who also wrote this. The title is fitting as it happens to star Elle Evans, who in real life is married to Muse front man, Matt Bellamy. While the film looks like a dream it is let down slightly by a general lack of thrills.

Adam (Riley Egan) is a struggling artist that is unable to find his perfect muse, the person who will inspire him to produce great art. One dark night he is convinced by a local thug, Hector (Max Decker) to give him a lift out of the city. It is there that Adam encounters a strange and beautiful woman (Evans) who somehow follows the artist back home. This mute woman is the exact inspiration that he needed, and soon he finds his work gaining more and more success. An art colleague jokes that Adam has found a Leannán Si; a mythical creature from Celtic lore who grants divine inspiration to artists in exchange for undying love, little realising that this is indeed what it appears Adam has stumbled across... 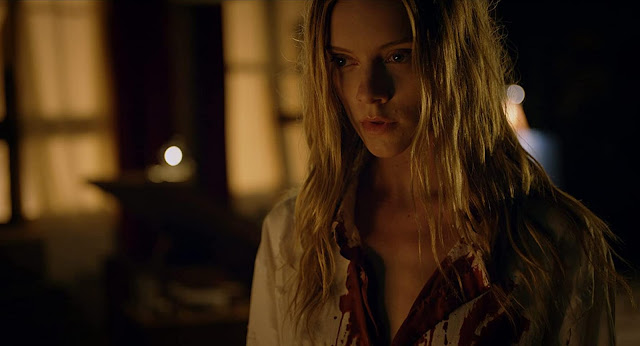 This was quite a slow moving horror which was most certainly its design. At its core this is a love story of sorts, and also a film about all consuming obsession. Evans's character is a walking metaphor for the singular drive that is needed to be successful. Her character was a highlight here, which is odd considering she is the one character who never utters a word. The talking cast members never manage to achieve as much of an impact. It makes sense that Adam is socially awkward and shy, yet there is no real development for his character over the course of the movie. From start to finish he is mild mannered and timid, yet it felt there should have been more of a transition. I felt it would have been better suited if he had started to become more of a monster, at the very least show some real backbone. Even when he is doing things that are far from innocent he never breaks out of his quietly spoken ways. At times there are some interesting ideas presented, the best of which lasts for all of one scene before the idea is resolutely shown to be false. Mental illness being the root cause of all Adam's troubles rather than a tangible being could have been a good idea to properly explore.

While Legend of the Muse is keen to explore the love between an artist and his inspirations this also wasn't shy on showing horror when need be. There is plenty of blood spilt in the scenes where it appears with some fun moments of sudden and unexpected danger. The core cast do a fine job but none really get too much development to them. Some, such as Hector and landlord, Lance (Phil Abrams - Insidious: Chapter 3) still stand out due to the enthusiasm the actors inject, but others, such as gallery owner, Valerie (Jennie Fahn) seem to exist just to fill in the gaps of the story. Valerie's sole reason to exist in the film is to explain Evans's character, outside of this she really doesn't do much.
Visually the film fared a lot better, Adam's apartment in particular had great set design to it, the lighting and cinematography brought it to murky life. The film's soundtrack was a fine accompaniment to the tragic love story playing out even if it had no real surprises to it. The basic story line may be as mostly predictable as the fairy tales and legends it is inspired by but it does have some good moments, in particular I was happy with how this was all resolved. 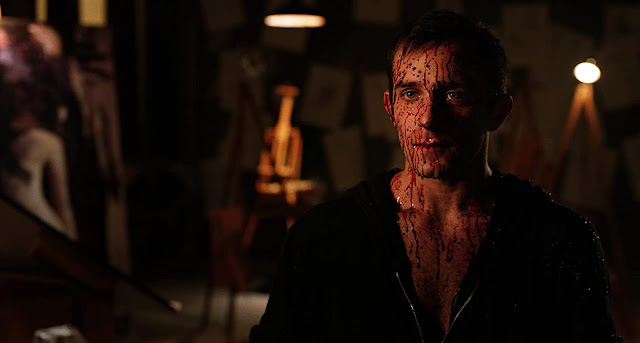 Legend of the Muse told a simple story in an attractive way, but it is the lack of too many real surprises that stopped this from achieving greatness. There are some strong moments here but the lack of development for some of the core cast meant it all felt slightly too familiar. DarkCoast released Legend of the Muse on Amazon this July.