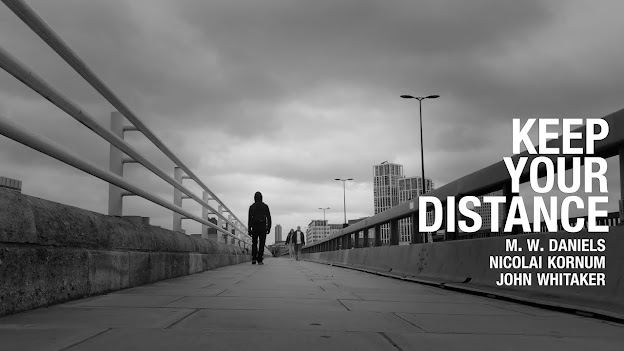 Back in April we were deep into lock down here in the UK, one of the best things to come from this time was the short UK horror anthology film, The Isolation Horrors which featured films from five different directors, all based around the type of horror that could occur while trapped inside. Keep Your Distance is a horror that was put together by three of the contributors to the anthology. It feels kind of like a spiritual successor, or an epilogue to that collection. With restrictions now lifted in the country quite a bit, the horror moves out of the home and onto the streets where the perils of ignoring social distancing becomes the topic.

The short takes place in London where a man (John Whitaker) not only ignores social distancing rules, but also coughs in the proximity of a mask wearing stranger (M.W Daniels). In anger at this the masked man starts to follow the cougher...

This black and white film was shot (on an iphone), edited and directed by Nicolai Kornum, with music by 1i2c (Whitaker). The central idea behind this was simple with the majority of the film being the walking pursuit, the thudding soundtrack a perfect accompaniment for this. It leads up to a finish that made me laugh out loud, I thought it would be ridiculous if it did what it appeared it would do, and so it was funny to see it actually go there. I love how some people have been able to get inspired from what has been happening this bad year. With Keep Your Distance you have a film that works both as a surreal bit of horror, but also with a relevant message underneath the madness.

Posted by Daniel Simmonds at 07:18