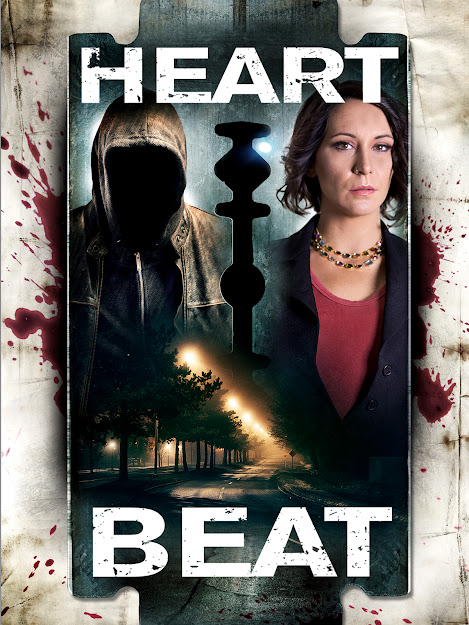 Heartbeat is a giallo inspired thriller that was directed by Gregory Hatanaka. It was actually filmed at the same time as Choke, a film of his I reviewed at the start of the month. Due to this it features many of the same actors. Also like Choke this is one strange film, its stylistic choices certainly made it stand out, but I'm not sure it was entirely to my liking.

Jennifer (Nicole D'Angelo - Choke, and who also co-wrote this with Hatanaka and Chris Spinelli) is a reporter whose latest story, concerning the dodgy dealings of a company, has resulted in a slowly growing number of murders. The victims all happened to work for the company. She teams up with, and gets involved with Detective Santoro (Spinelli - Choke) and together they search for the answers into who the killer could be.

There is a certain rhythm to the death scenes here, and while they were certainly interesting to watch they were also a bit strange. In giallo fashion we have the killer's perspective as he approaches his victims. All we see of him (or her) is their black leather gloves, and a nice little tidbit of the new victims initial reaction to seeing this person. The kills, either by strangulation or by cut-throat razor are only partly shown, and this is what makes this feel so different. The initial part of the kill plays out in a traditional format, but then the camera freezes on a close-up of the victims face before cutting to a shot of the person now lying on the floor dead. It gives a weird dispassionate feel to these killings and worked well, but with such a huge amount of victims it would have been nice for some variation. The prologue murder was a very bloody affair, so it was a shame that nothing that comes after matches this.


The way the story is told made it hard to follow. I was trying my best to follow along but I have to admit at times I was pretty lost. This seems to be the style the director goes for as I remember being similarly lost while watching his previous film. It felt like this story was less important to the movie than the ebb and flow of the murders. Characters meet up with one another, usually one on one, and along the way there are red herrings thrown at the viewer. An assortment of characters are introduced, usually quite suspicious seeming until they too turn up dead. It was nice to see a few familiar faces in smaller roles. Sarah Brine (Choke of course) has a small but important role, while Shane Ryan (again, Choke) plays the role of a socially awkward photographer who is the first who seems to notice the patterns of murder. There seemed to be a bunch of characters whose inclusion I just didn't understand. In particular I recall a bizarre scene of two gangsters firing their guns into the air, I'm not sure these characters ever have any explanation for just why they are even in the film. The red herrings often feel like they are there as a tick list objective rather than appearing as genuine possibilities in terms of where the plot is going. One area that I can say was excellent from start to finish was the soundtrack. I loved all the music here, and appreciated the few occasions where events on screen perfectly matched up with the sound, such as when a character kicks a prone body.

Hatanaka has a strange way of making films, which at least means that they are often just as memorable as they are hard to follow, due to the dream like feel they create. I feel if the story had been either more captivating, or easier to follow it might have made the many kill scenes feel less clinical. When the killer finally gets revealed they seem so more deranged than the cold scenes of murder preceding the reveal. I think I did like the strange editing techniques used here, but they alone couldn't save what was a bit of a bewildering affair.

Posted by Daniel Simmonds at 07:20