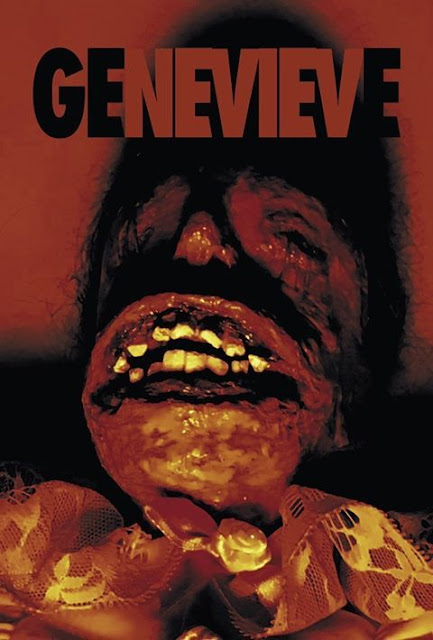 Nicholas Michael Jacobs 2019 anthology film Urban Fears featured a segment that was about a grotesque supernaturally possessed doll named Genevieve. Now the director has released a spin-off from Urban Fears, and from the title, Genevieve it is obviously all about that particular doll.

A thief (Nicholas Michael Jacobs) has heard about the notorious, supposedly possessed doll that is kept in the basement of Ted Morris's house, he suspects that the doll will fetch a lot of money from the right buyer. With Ted at his son's funeral the thief decides to break in and steal it. Unfortunately for him, he is ill prepared when he finds out for himself that the rumours about this creation are all too true...

Genevieve is as predictable as can be, yet, like all of the directors films there is just an indie charm here that many others fail to conjure up. The best part for me was the black and white prologue that plays after a sound bite. It was all so atmospheric and mysterious. I'm not too sure how much this plays into the segment from Urban Fears, the doll itself stuck in my mind, but not so much the story that revolved around it. Like in that film, here the doll is only ever shown at extreme close up, or in the distance, done so to get around the trouble of making it appear to move on its own.

The meat of the short is kind of a found footage, but it seemed more like what we were seeing was literally from the thief's perspective, rather than being anything recorded. It was fun going back to that basement, and the doll remains as hideous as ever, which is a good thing I might add. I may be misremembering, but I recall it being wise cracking and vulgar, here we just hear the doll giggle a lot.

Despite the predictability of the short, and the general lack of any sort of violence I really enjoyed it. It was nice revisiting what is an effectively designed doll, and the filmmaker is getting better and better at the creation process of his films. Genevieve is free to watch on YouTube, so check it out for yourself.