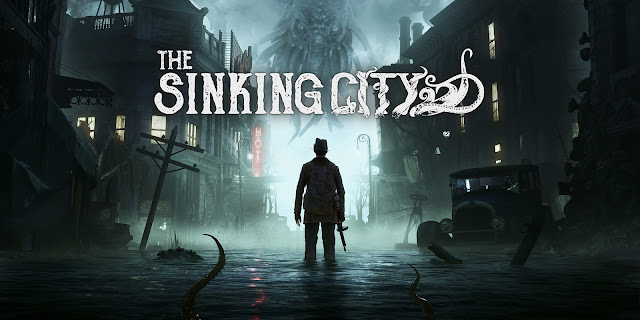 The Silent Hill series of games are some of my all time favourites, and they share some story elements with the literary works of H.P Lovecraft. So hearing there was a third person adventure game based entirely on his works, called The Sinking City my interest was piqued. Coming from a mid-tier games studio (Ukrainian based Frogwares) I expected this to be a tad under polished, and it was, a clunky control scheme, average graphics, and obvious reuse of character models and location assets. Despite these flaws though I found myself deeply absorbed into the atmosphere of this 15 to 20 hour adventure.

The Sinking City takes place in the secluded fishing town of Oakmont, Massachusetts in the 1920s. At some point in the recent past the city suffered a terrible flood, with huge chunks of the city now underwater. Due to its remote location, as well as the strange fact it doesn't appear on many maps, the citizens of Oakmont have been left to fend for themselves. Former U.S Navy sailor Charles Reed (now a private investigator) has been suffering horrific hallucinations and nightmares since an incident back in his Navy days. His investigations into these visions has led to him discovering that not only is his affliction one that plenty of other people in Massachusetts also have, but that Oakmont appears to be the origin point from where the nightmares and visions are spreading from. Not long after arriving at the city you are hired by Robert Throgmorton (one of Oakmont's leading families) to investigate the disappearance of a team of scientists who had headed out to sea believing they had located the exact location of the madness. 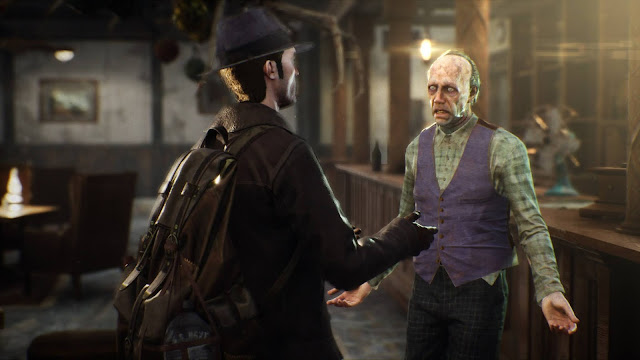 This is an open city adventure game that for me felt like a combination of Silent Hill and L.A Noire. After the first chapter the city is open to explore. With many streets flooded a lot of your travel has to be done by motor boat. Unlike the Silent Hill games, this ruined city is still vastly populated, the inhabitants, as well as outsiders (coined 'newcomers' by the locals) wander the streets. Every now and again you will stumble across a boarded off section of streets, which is where the monsters are contained. Combat against these monsters is just one half of the overall whole of The Sinking City, not even that, you spend roughly 30% of the game fighting things. Thankfully there is plenty of world building lore explaining just why these creatures are everywhere, and some side missions you get even go as far to say the exact particulars of how they came to be. There isn't a huge amount of variation to these creatures, with about four or five main types, that have slight variations among them. They are all corrupted humanoid looking things, such as the weakest grunts which resemble a kind of lanky hand crawling about. Others including child like things walking around on legs which shoot projectile bile from their split stomachs, half torso like crawling creatures, and a hulking brute who can easily kill you in just a few hits. Dotted throughout the game also are a few boss monsters, and on occasion there are also human enemies armed with guns to battle against, including the local chapter of the K.K.K.

Combat is one of the less well developed elements of The Sinking City. As you go through the main story missions you unlock a bunch of different guns. Starting off with a pistol, you later get a revolver, shotgun, rifle, and Tommy gun. All of these have craftable ammo, as do the grenades, traps and first aid kits. Parts to craft all these can be found in boxes dotted around the game world and are often given as rewards. It's good you can make your own ammo and health as the awkward combat means you will be getting through a lot of both of them as it can be hard to shoot your targets.

In addition to your life bar you also have a sanity bar. Being in close proximity to monsters drains your sanity, as well as being near unsettling sites, such as ancient statues. You wont die if your sanity runs out, but you will start to see hallucinations floating over the screen as it lowers, and when its nearly empty enemies spawn in, but being hallucinations they evaporate as soon as they are attacked. While the combat is one of the weakest parts of the game I really didn't mind it. I always had enough materials to make replacement ammo and health, and formed my own ways of dealing with each particular enemy type. I will add here that the game is also a bit miserly when it comes to fall damage, though your skill tree gives you an option to reduce this damage. The skill tree is geared entirely towards combat, such as making your weapons more accurate and hold more ammo, or to increase your health and sanity. It might have been nice to see some non combat upgrades on the various skill trees. 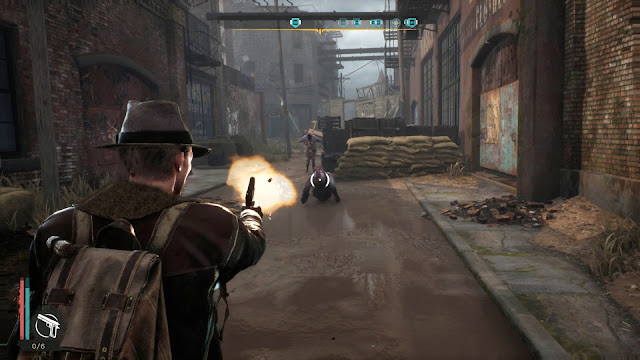 The investigation side of the game is where you will be spending most your time. Each of the games chapters takes the form of a new investigation and each are tackled in a similar way. You will either be told key information, or discover it while searching crime scenes, places of interest or objects. It is then up to you to use the clues to work out where you should be heading. To aid you with this you have access to various facilities around Oakmont. You are able to search the records at the library, the police station, the town hall, the hospital, as well as the sanitarium. Research requires you to match three different search terms. So for example, wanting to find a criminal's address at the police station you can search for type of crime, time period and type of inhabitant to quickly get the info. I really enjoyed this part of the game. It involves plenty of leg work for sure, but with the city having so much atmosphere I enjoyed the constant walking around its streets. As you explore the place you unlock quick travel points so I never found this part to be dull at all. Once you arrive at a key location you usually have do some combat, before exploring the environments for clues. These locations are not exactly varied, there seemed to be about five or six different interiors which are then reused over and over during the course of the game. Once you have found all the clues in a place a blue rip in reality appears, going through this leads to a weird other world in which small fragments of past events play out at set points, it is up to you to arrange these points in order to get a deduction of what has happened. The 'detective vision' here is all explained rather than being a convenient gameplay inclusion as is the norm.
Most cases have two different outcomes to them, with no right answer. One for instance results in you either helping an old crime boss return to power, or handing over his empire to his son. There are a few side quests and these were the most fun parts of the game for me as they were tiny little self contained stories that were a pick and mix of Lovecraft tales. Books sending people insane, a witch living inside a mirror and unseen horrors among many others, lovely stuff.
Some of the main chapters were a bit pointless in feel. As much as I loved the game I felt some of what was included wasn't needed, The Sinking City almost felt like it was too long a game for what you were actually doing. One chapter in particular, towards the later half of the game had your character accused of a murder he didn't commit, the case saw you having to find out the true culprit. This felt like pure filler, especially when it leads to the conclusion that there may not have even been a damn murder in the first place! Other chapter missions are a lot more fun, especially when you get to dive into the sea off Oakmont (which happens around five or six times). These lead to brief underwater sections where you are slowly walking around in a diving suit, always culminating in yet another secret underground cave where ancient terrors lurk.

The games graphics are functional but hardly of the highest quality. Character models are reused for various people, and the outside always looks misty and ill defined. I love this aspect though for how much it reminded me of Silent Hill. Despite the graphics Oakmont really felt like a living and breathing place. The flooded streets, the varying weather, day and night cycles, and different districts brought the city to life, as did the people walking around in it. This was helped by the fantastic soundtrack which is always understated, but gives a downbeat vaguely triphop feel that reminded me of Silent Hill in its more mellow moments. Talking to characters provides you with a typical conversation wheel, and I always find the conversations really interesting.  The lore of Lovecraft can be seen in plenty of places, Dagon, The Shadow over Innsmouth and many other works of his are all melded together here. The fish like Innsmouther refugees are used here as a clumsy attempt at tackling the issue of racism, though fare better than a later character's inclusion who is hoping to become the mayor of the city. Notes you find from him include a catchphrase 'Make Oakmont great again!', while another one you find mentions talk of building a wall around the city to keep the newcomers out. All a bit too obvious a dig to not stand out.. 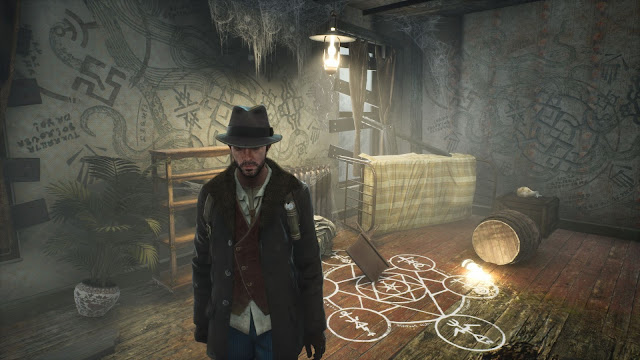 The Sinking City is a game where the journey is the goal, not the destination. In fact the games ending really stinks, an old school binary choice of one of three different endings, each of which lasts all of 30 seconds. A terrible way to end such an enjoyable game, its a good job I had so much fun getting to it. The game isn't polished and can look downright ugly at times, but Oakmont has a real atmosphere and sense of place to it, I found myself really sucked in to living in this city, and so had a complete blast from the start right until (just before) the end. I can only imagine how much more amazing this would have been with a bigger budget.