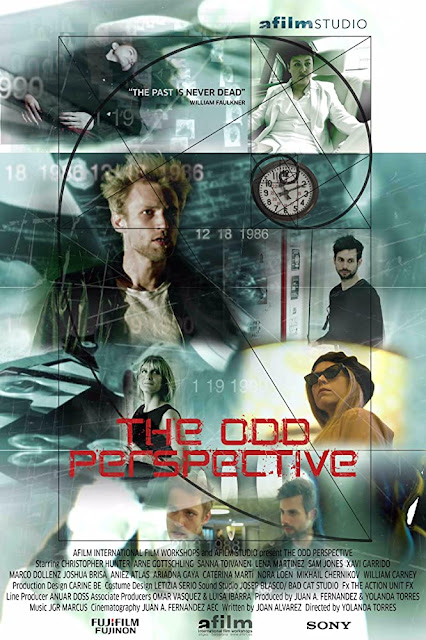 The Odd Perspective is the third film I have seen of Spanish director, Yolanda Torres (The Afterglow, The Forsaken) in the past few weeks. Having enjoyed his previous films I was pretty sure I would also get on well with this thriller. I will readily admit I struggled to make out much of what was going on, but I sure enjoyed the ride.

Christopher Hunter (The 12) stars as Aleix Martin, a synergist with the gift of being able to see patterns in reality. He returns to his home city after some years away, this is due to the recent death of his father, who was a supreme court judge. It isn't long before he has gotten himself involved in the search for a serial killer, Aleix's brother (Arne Gottschling - Suicide Club) is a detective in charge of the case and hopes his brothers unique skill set will help him catch the killer.

I don't know what a synergist is and I was none the wiser by the films end. From what I could tell, Aleix is a troubled genius whose special ability to see numbers and patterns in everything is almost like a curse to him. He spends vast chunks of the film distressed, pacing back and forth repeating phrases and sequences over and over. At times it seems he has a 'mind palace' which is displayed as a swiftly edited series of images and movements, usually while a line a character has previously said plays over and over on repeat. Occasionally the numbers Aleix sees literally appear on screen as floating images. I didn't understand any of this, but then I am not the smartest person out there. Regardless I still found myself caught up in events. From humble beginnings the story opens itself up into something far grander, so that by the films conclusion it felt like this story had only been half told. I'm not sure if a sequel to this was planned, or leaving the story so relatively unresolved was purposeful.


There is a heck of a lot of slow motion movement here, I found myself thinking at times that if all the slow-mo had been removed the movie would likely be a huge chunk of time shorter! It made for some dramatic moments, though again I didn't really understand too much of what was happening. There was a key scene towards the end for instance that played out in complete slow motion, baffled as to what it meant but the characters sure looked cool in that scene. Sometimes the slow motion effects do get in the way of the plot. There are several chase sequences for instance that feature blurred slow motion which made it hard to follow, you can get too much of a good thing. Special effects were minimal, they did the job when they were used, but the editing can be exhausting with how quickly shots are stacked on top of each other at times. This also features an urgent thrilling soundtrack which fitted what was going on visually perfectly well. There are plenty of actors here, but it is only a handful who have anything meaningful to do, there are no end of characters who stand around looking brooding and deep in thought, and yet who add nothing to anything that is going on. Bizarrely this all adds to the bizarre Euro-cool feeling that The Odd Perspective seems to effortlessly achieve. While I couldn't follow what was going on, many of the characters could and so I felt like a dumb outsider watching a bunch of geniuses following obscure trails of deduction.

I enjoyed watching The Odd Perspective, it was interesting and thrilling in equal measure. I did feel that the snazzy and dizzying fast paced editing may have been there to obscure the incoherent nature of the plot. The story was hard to follow, and doesn't really get that well resolved, but it was a good piece of escapism to get caught up in for ninety minutes. For more information about this and other films from The Movie Agency head to their Vimeo page here.