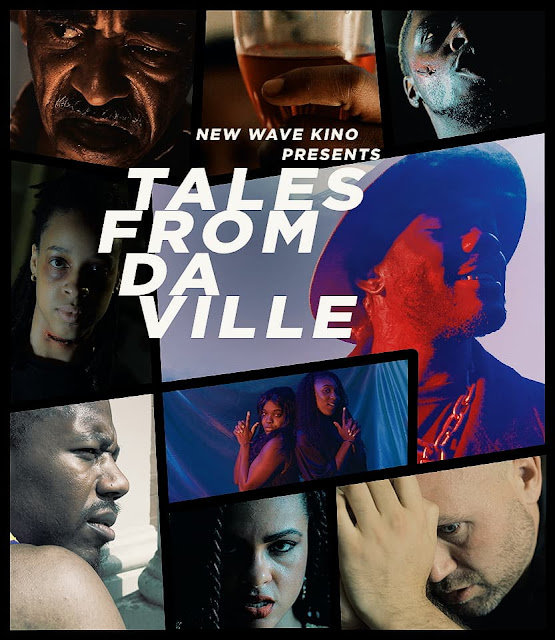 Social thriller anthology Tales from Da Ville is now available to watch for free on YouTube. Originally created in 2018 the three episodes that make up season one were remastered in 2019. The hope was that this would be to horror anthology shows what Get Out was to horror films. Each episode tackles racism in a different way. The third episode especially is very relevant with all that is going on in the world at the moment. The message in each of these episodes is very heavy handed and simplified, but maybe that is what some people need. All three episodes was directed by Christopher Dandre Williams and Mo Rabbani.

Each episode is hosted by Brooklyn rapper, Bam Vito. He plays the count of Brownsville Brooklyn, and it is during his regular visits to three modern day witches that he tells different cautionary tales. The first of these is Unwoke. Odysseus Bailer plays Carl, a black man who has nothing but disdain for his own race, aspiring to be just like a white man. One night he is visited by the spirit of his ancestor, (played by Byron C. Saunders) and given exactly what he wants. Saunders was the highlight of this episode, his demented performance was a joy to watch.

The second episode is Revenge. In this one a black woman is attacked and left for dead by three white supremacist friends. She is then approached by an unlikely source to return to life and pay back those responsible. This had the most blood and gore of the three, and made good use of the limitations of the budget, such as slight blurring effects to hide props that may not have looked as effective in focus.

Finally is The Purging whose release I would say was strangely prescient of police brutality against black minorities, if not for the fact that it is a frustratingly common occurrence. Officer Douglas (J.D Brookshire) is proud of the perceived justice he has given out to black people over the years. One day the sister of a man Douglas killed visits him and puts a curse on him. The officer is forced to confront the spirits of those he has unlawfully murdered and to take a stark look at his own soul.

All three episodes tell clear stories. I understand why the direct route was taken but it does have the effect of these playing out like morality tales rather than at times feeling like these feature developed characters. It has a danger of reducing the antagonists to cartoon like characters rather than actual people. Being an indie show this can be rough around the edges, some of the acting isn't the strongest, and there are audio issues such as background noise getting in the way.

I have a huge soft spot for anthologies, and while the quality here isn't the strongest, the messages it provides are very relevant. It is always good getting a new perspective on horror, and merging social issues with horror has always been something that works well. Best of all, as mentioned previously Tales from Da Ville is free to watch, and with each episode roughly 10 minutes long this is something that takes little time to get through.

Posted by Daniel Simmonds at 09:52