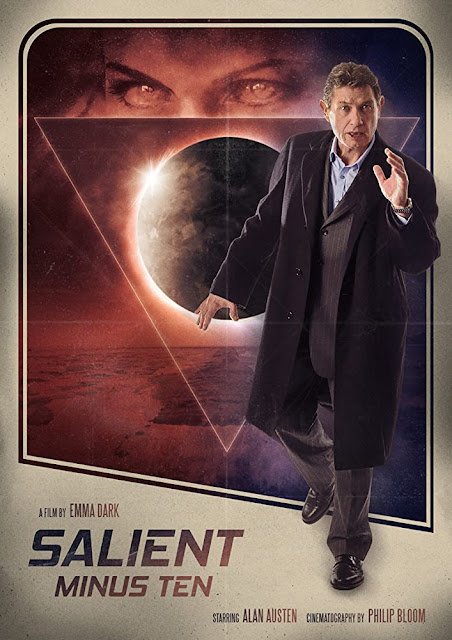 Salient Minus Ten is a sci-fi horror short that was written and directed by Emma Dark (Seize the Night). After a successful festival run, this film has now come to DVD and digital, with its digital release back on 27th May.

Alan Austen (Star Wars: Episode V - The Empire Strikes Back) stars as an every man - Adam, who one day on his way to work is pulled into a demented game. Transported through time and space he finds himself in woodland, along with some other commuters also caught up in the mysterious goings on. The man has a device on his wrist, and a message on his phone telling him he has 'ten minutes to save the world'...

I like time travel in films, that is alluded to here, which is a big plus. The majority of the short has Adam bewildered and forced to participate in deadly games with which he has no clue what he is meant to be doing. Austen portrays the confusion and fear well. I thought the effects on the 'altered' people he comes across to be pretty cool. Events are kept mysterious enough that it isn't clear exactly what is going on. There is very little dialogue, the characters of Adam, and a mysterious woman (Dark) are the only two in the small cast who speak. It ends much as it began on an unclear note. I got a vibe of The Twilight Zone in bitesize form watching this, would have been great to have a Rod Serling style intro and outro for this.

With a 12 minute run time this remains engaging throughout, the resolution left me with more questions than answers, but this was a solid little sci-fi short. Salient Minus Ten was released on DVD, a double pack that also includes Seize the Night. That can be purchased here. The short can also be viewed on Dark's YouTube channel.