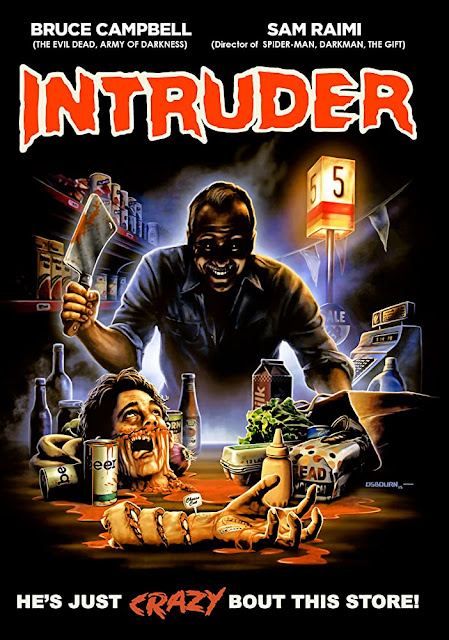 I had never heard of 80's slasher Intruder until it popped up randomly on the 'Shudder TV' section of Shudder. The brief clip I saw looked so great that I immediately decided that would be the film to watch that evening. Directed by Scott Spiegal (Hostel: Part III, Dusk Till Dawn 2: Blood Money). I was excited to see that not only do Sam Raimi (director of The Evil Dead series and Spider-Man series) playing a character here, but also his brother, Ted (who had roles in everything Evil Dead related), and even the legend Bruce Campbell turns up in a small role here.

The film takes place entirely at a local supermarket and follows the night shift over the course of one night. Cashier, Jennifer (Elizabeth Cox - Night of the Creeps) gets an unexpected visit from an ex-boyfriend, the creepy Craig Peterson (David Byrnes - Witchcraft IX: Bitter Flesh, Witchcraft 7: Judgement Hour). He is obsessed with the girl and says he is determined to do anything to get her back. This leads to an altercation that involves nearly all of the staff and results in Craig getting thrown out the supermarket. Soon after it is revealed by the shops owners, Danny (Eugene Robert Glazer) and Bill (Dan Hicks - Evil Dead II) that they have sold the business and it is going to be closing the very next day. It is to this backdrop that a night of terror begins, one by one the staff begin to get picked off by a crazed killer hiding in the shop... 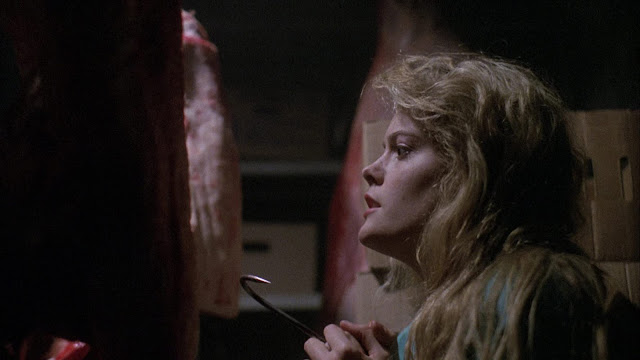 I loved how of its time this slasher felt. Coming in at the late end of the eighties this nonetheless is a prime example of the style that decade is known for. Over the top death scenes, spirited performances and wonderful practical effects combine to make a horror that at its core is very silly, but it sure does know this. I found the start of this to be the most interesting as it has every character in the same scene, all of them getting in a fight with Craig. I found the contrast between this out in the open fist fight in a brightly lit room and the later dark traditional isolated slayings to be kind of cool. It made a change to have the killer be a known quantity. The acting was never the strongest here, but with a story that never takes itself seriously it works well. Knowing Bruce Campbell was in this I did get a bit distracted waiting for his character to appear, and while his appearance is very brief (I think he gets about two lines) it was still lovely to see him. It was also fun seeing Sam and Ted, both in fun roles.

The draw of slashers is usually the kill scenes, here there are all many of implements used, many revolving around the types of machines you would find at a supermarket. Characters are impaled on metal spikes, get carving knifes to the back of the head, get sliced in half by machinery, hung on a butchers hook, one poor soul even gets crushed in a huge metal press. Much of this was more implied rather than shown. Often the kill would occur just off camera, or the scene would shift suddenly to complete the effect. As an example, one character is just about to get stabbed by a knife, it then cuts to a different scene of a character bringing the same style of knife down onto a watermelon. Many of the kills are shown via the first person perspective of the killer which felt very Black Christmas, makes the viewer feel complicit in the killings when you have the victim looking directly at the camera. Occasionally you get a Psycho style shadowy figure in the background, always something obscuring them so that you don't get a decent look. 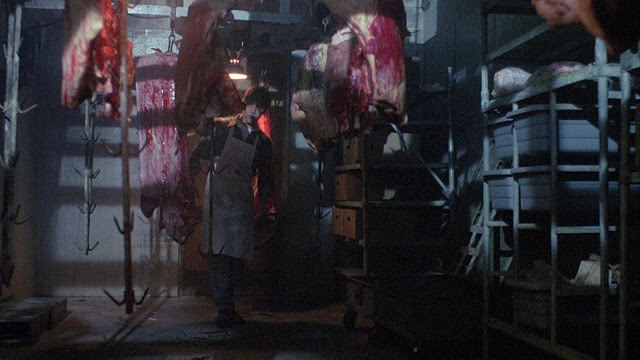 Intruder loves perspective shots from inanimate objects, with the camera often in the most unlikeliest of places, such as in a trolley being pushed around the store, or on an item just about to be scanned. While this wasn't directed by Raimi it felt very familiar to his style of film-making at the time with all these POV shots. Being a slasher the story is very basic, there are huge plot holes throughout, as well as a killer who in the classic trope seems to be able to teleport from location to location as when he is needed to strike. There are dark places for sure, but we are expected to believe this killer is also able to traverse the brightly lit main store without anyone spotting him. It leads up to a demented final act, with the killer finally discovered the character gets to fully go over the top with their performance.

Intruder is a great film, though with hindsight I say that. I loved the retro feel of this, and how competently its story plays out. There is everything you would expect from an eighties slasher here, the bits that don't hold up to scrutiny help make up the overall package. Intruder is on Shudder currently, it has made me a bit thirsty to watch other eighties slashers, so maybe my bi-weekly 'Slasher Sundays' will have me exploring more of those in the future.