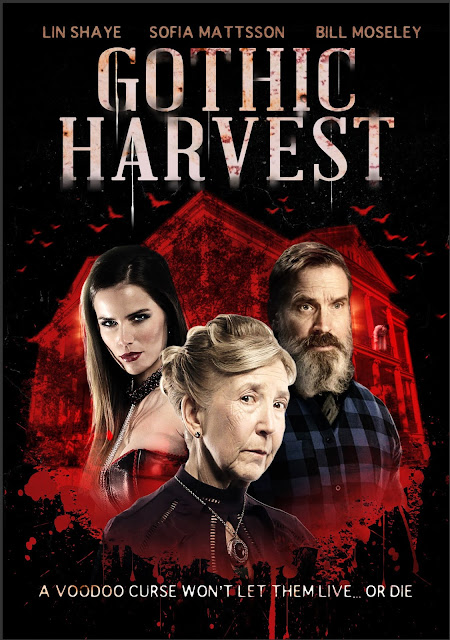 Appearances can be deceptive, that is both a theme running through Ashley Hamilton's Gothic Harvest (that marks his directorial debut) and a critique of the film itself. With a bunch of familiar faces, and faces that also happen to be good actors I expected something special here, however no amount of good actors can save what is ultimately a film that seemed to lose focus the more it went on.

It is Mardi Gras in New Orleans and four college friends have gone there to party. One night, one of the four, Hope (Abbie Gayle - Scream: The TV Series, Scream Queens) hooks up with a handsome stranger, Gar (Hamilton) and heads off to his house. The remaining friends, who include among them the sensible Benay (Ashton Leigh - Frankenstein vs. the Mummy), Katie (Tanyell Waivers - Ma), and Tina (Mary Alice Risener - Scream Queens) become concerned when they are unable to contact their friend. Eventually the three team up with local cop, Detective Hollis (Bill Moseley - The Devil's Rejects, The Texas Chainsaw Massacre 2) and a local man, Lafitte (Yohance Myles - Containment) in order to find her. It turns out Hope really is in serious trouble, as she has become the latest 'guest' of a family from the 1800's who are cursed to never age, and who require blood to retain their vitality.

The general idea behind this was a decent enough one, but the way the film goes about telling the story is where it falls down. It felt like it didn't really know who it wanted the focus to be on. The story of Hope's abduction should have been the centre of this, yet this falls to the wayside a bit as the immortal family begin to take more and more screen time. They come across as a more civilised version of the Firefly family from House of 1000 Corpses and have a whole bunch of character to their eccentric personalities. They include among them Lin Shaye (the Insidious series) and she is usually great in everything she turns up in, but even she cannot save this one. There are subplots going on with this family but they not only added nothing but they led to dead ends. In particular there is quite a large story going on with the daughter, Amelia (Sofia Mattsson) who has headed out to the city for a night of pleasure. This whole part felt pointless and had nothing to do with the main story. It is finished with in such an abrupt manner that I wondered why it was even included. None of the family have any interesting things going on for them, though I thought Thomas Francis Murphy (The Walking Dead) was wonderfully cast as the father, Justice.

At least they have some character to them as cartoonish as they appear. The protagonists get barely any character development at all and like many of the characters here are treated as disposable. It seemed like halfway through production it was decided the cursed family should be the main characters instead of the partying girls and so things switch tracks leading to an underwhelming feeling. I hoped that Moseley at least would bring some fun to Gothic Harvest but he is not only wasted here, but he is given a comedic role with many of his scenes having him unsuccessfully trying to chat up Tina, and making excuses why they should be alone, while contributing nothing to the ongoing story. Whenever there is an opportunity for horror to occur it is rushed, characters die brief and unsatisfying deaths, so brief that it is almost literally blink and you miss it. There was no feeling of suspense or peril here with a perpetual feel of low stakes. To me it seemed like all the decent parts of the story didn't manage to make it into the film. The majority of the scenes felt like filler, with key story beats displayed in a confusing manner. The whole specifics about the curse for instance play out in a flashback, but the script is all in riddles. By Gothic Harvest's conclusion I was still unsure of key details. This needed far more of a tightly written main plot line than what was provided. 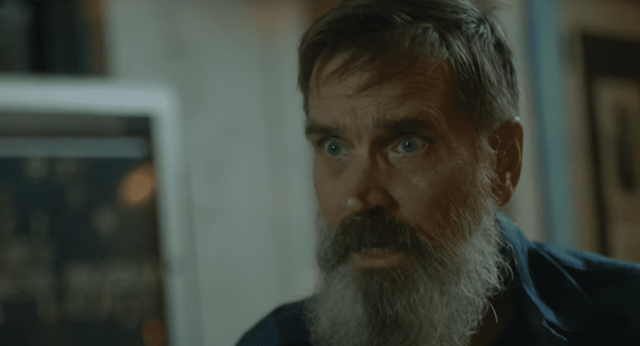 At least the film looks good and has a good enough soundtrack. The editing was dizzying and felt too fast paced. The present day parts at least fit this style of editing, but the flashbacks would have benefited by this being slowed down, rather than a kinetic array of shots all stacked on top of each other. With quite a bit of the present day featuring characters and scenes that were non essential it might have been a better idea to have more flashbacks to properly tell the story that was rushed through here. It is a shame as with this amount of decent actors this should have been a whole lot better than it was, but many of them felt wasted in their roles.

I didn't particularly enjoy Gothic Harvest or where its story went. It was weirdly tame despite elements of Voodoo and a murderous family. I will say it was almost worth the watch for Moseley and Shaye, it isn't often Moseley plays a character who isn't evil, and it is always fun to see Shaye playing a villainous role. A big problem with Gothic Harvest was just how one note the characters all were, it would have been nice for them to get more depth. This could have been something special but as it was it was sadly average. Gothic Harvest is due for release thanks to High Fliers Films.