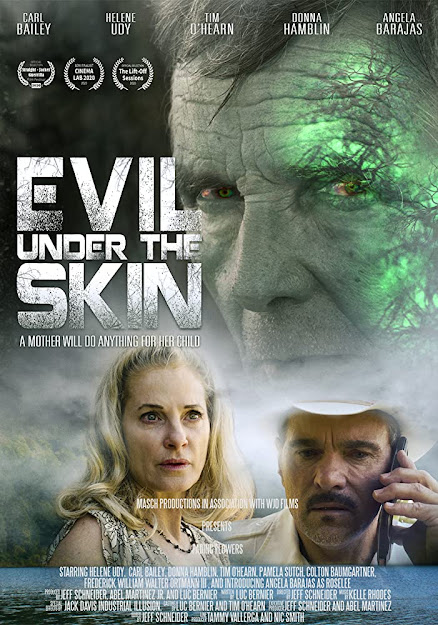 Evil Under the Skin is an odd film to watch. It seemed at first to be trying to be two different genres thrown on top of each other. There would be long scenes of mother and daughter bonding time in brightly lit sunny locations. Then there would be the swiftly edited sequences of horror which appeared totally unrelated and out of place. Thankfully this film gets better as it goes along, and while the obvious twist does come to pass, it is a lot better handled than it initially looked like it would be.

Sophie (Helene Udy - Mrs. Claus, My Bloody Valentine) has gone on vacation with her daughter, Roselee (Angela Barajas) to a lake side house. They are spending time with each other to re-bond as they had had a split in the past. On the surface things are going great, however Sophie is experiencing painful headaches and having recurring hallucinations of strange horrors. While out walking one day she meets a woman, Carla (Donna Hamblin - Hellcat's Revenge) and her brother, Matt (Tim O'Hearn - Johnny Gruesome, Killer Rack) who befriend her, but who may have ulterior motives. She is also visited by the local sheriff, Roy (Carl Bailey - Misfortune) and the local park ranger, Jenny (Pamela Sutch - Paranormal Captivity) who are investigating reports of strange loud noises in the area a few nights back. 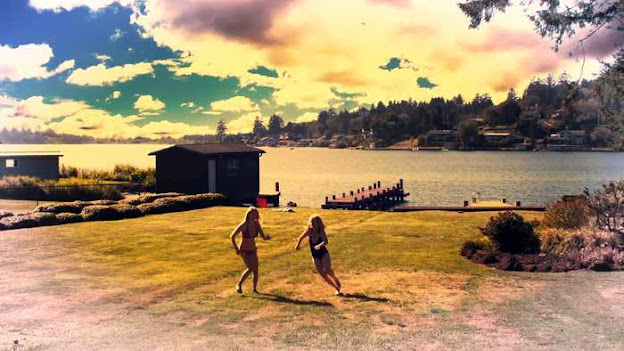 I think if Evil Under the Skin had remained as floaty as it first appeared I would not have liked this at all. The first third I thought was weird in a bad way. The horror sequences felt so awkwardly inserted into the plot that they felt abrasive. I know now that that was completely intentional. These moments of horror are meant to feel out of place, and go against the perfect getaway vibe that Sophie and Roselee are having.It was interesting what was going on with some of the side characters. Carla and Matt, the incestuous siblings are very suspicious characters, I didn't trust them one bit. The same almost goes to the sheriff who doesn't seem to be the most trustworthy person. These side character subplots play out almost separately to the main story going on and include one or two red herrings.

The cast here is not very large, but each of the characters are important in their own right. A lot of the themes of the movie seem to be about regretting past actions, how character wish they could have done things differently. Both the sheriff and ranger tell stories about how their actions in the past resulted in severe ramifications, and that seems to point to the story of Sophie and her daughter, with it insinuated that Roselee's dad abused her, and that Sophie didn't do enough to stop that. All the actors here were fine enough in their roles, I particularly liked O'Hearn who was effortlessly creepy, and Bailey. Udy had a challenging role, and while her hysterics at times led to some silly moments, there was a good balance between her normal self and her more anxious side. Barajas was decent enough as the daughter, I understand the reason why it was felt her character needed to be scantily clad for much of the picture, but I felt the constant toplessness wasn't needed. 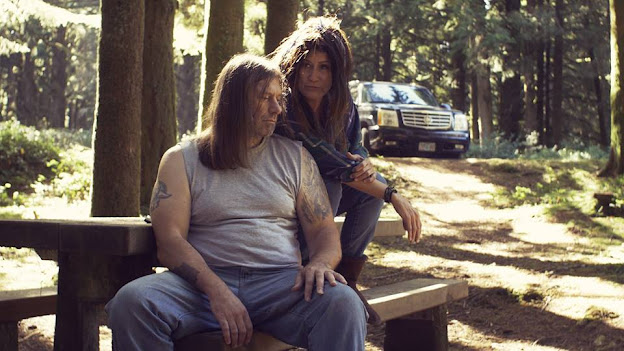 The movie has a overly bright de-saturated look, scenes looked bathed in sunlight. I didn't like this, it gave a dreamlike feel even if nothing happening was particularly worthy of that dreamy feel. Again though I have to reiterate that annoyingly I feel I know why this style of lighting was chosen. I feel I didn't give the director, Jeffrey Schneider enough credit as it feels like every choice here was chosen deliberately rather than down to sloppiness. Much of the design of the movie, from lighting, editing, and even clothing would only make sense on a second view, I found that to be quite clever in truth. But no matter how clever it was it meant I did feel a bit put off by the first half. I also thought the simple piano soundtrack felt a bit amateurish, it did improve as the film went on but it was a little bit basic sounding.

At face value Evil Under the Skin seems like a dull low budget horror whose twists are clear from a mile away. By the films good conclusion I was forced to admit that a lot of what I didn't enjoy about this was actually what helped the film work the way it did. This did have a surprising conclusion, maybe a few too many red herrings along the way but I have to give kudos for where this eventually ended up at. Evil Under the Skin is available to watch on Terror TV.

Posted by Daniel Simmonds at 15:04