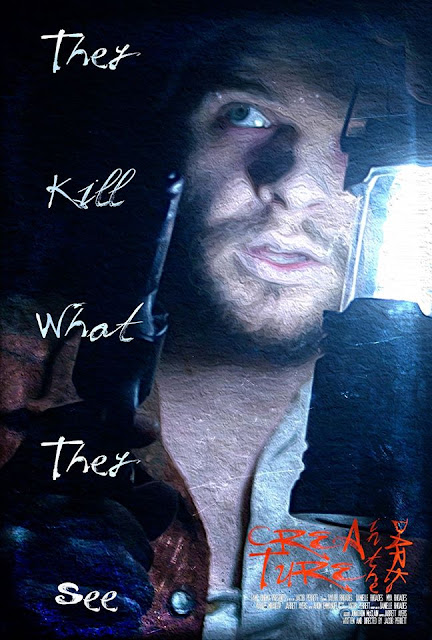 Creature in the Dark is the latest film from director/writer Jacob Perrett. His previous films, 2018's Weird Fiction, and 2019's Spine Chiller were both horror anthologies and so I just kind of assumed this one would also fall into that category. Instead this is a straight up apocalypse horror, with the playfulness that would sometimes be present in those previous films missing. One thing is certain, each new film from Perrett brings with it a whole new layer of quality.

This film takes place in a world where one day the sun simply vanished. There was no real chance to really look into exactly what happened as less than 24 hours after this world changing event the creatures arrived. These creatures are attracted to light and before this was understood many people had been killed. Survivors live in isolated settings, with looters a common problem. One such survivor is River (Taylor Rhoades), he has long given up on life after his wife, Emma (Danielle Rhoades) vanished during the start of the apocalypse some six months or so back, but he keeps on going for his daughter, Mya's sake (Mya Rhoades). 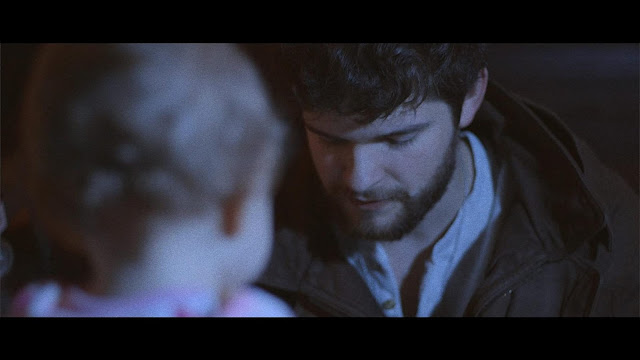 At first glance this could be seen as an indie version of A Quiet Place, especially when you see that like with that film, the husband and wife couple here are also married in real life. I see this film instead as falling into a growing sub genre of horror. A Quiet Place had sound being the bringer of destruction, Bird Box had sight being the big no no, and with Creature in the Dark you have light being the thing to avoid. Obviously not having much light means the movie is going to be dark, and that is the case here. The entire film takes place in River's home and so visually there is not much going on. Despite the darkness there are ever present illuminations, such as the lamps and torches River uses, and the ever present glare from the TV with which Mya is kept entertained. This is a slow paced movie, it isn't full of loud dramatic moments, instead events are kept squarely on River, and how he is coping with this dark new world.

This brings with it one of the biggest problems I had with Creature in the Dark, namely that the vast majority of the run time is River home alone, with the only person he has to talk to being his baby daughter, who obviously can't speak back. There are a few flashback sequences that take place shortly before the world goes to ruin, these feature the same house, but one bathed in sun light and which shows the growing souring of River's relationship with Emma. I really enjoyed these flashback sequences, they were a great contrast to the present day doom and gloom, the brightly lit house a stark contrast to the permanent darkness of present day. I wish there had been more of these flashbacks as River doesn't make for too much of a compelling character when he has no one to sound off against. I interviewed the director back at the start of 2018 and questioned the use of younger actors for parts of older characters in some of his earlier works. Well, this latest film shows that is no longer an issue, his stable of actors now bring with them credibility for the roles they play. Both Taylor and Danielle make their characters feel believable. 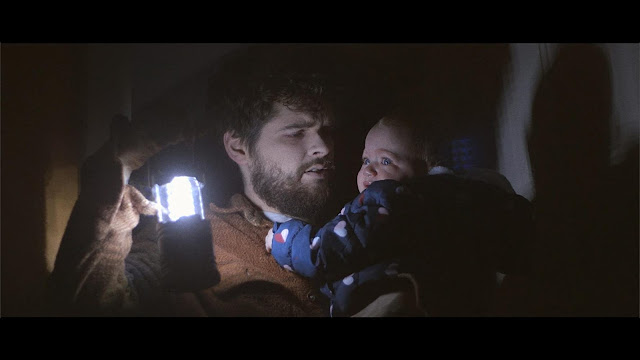 Much of this film has River alone, occasionally dealing with the odd intruder, and pondering the strange corruption that is affecting his and other survivors health. It is only into the third act when a bigger story comes into view. It results in a resolution for the movie, but it would have been nice to get more of this sooner. Occasionally with so little physically happening on screen I did find my interest start to wane a bit, but despite that this was a step up in terms of the overall quality, Perrett has proved he has the ability to make mature feeling films while losing none of the inventiveness.

Creature in the Dark was well filmed, interesting, and with some decent acting. This fell down slightly for me with the lack of dialogue restricting how much empathy I could feel for the protagonist, as well as the lack of much occurring during the 80 minute run time. Still, this is another step up in quality and has me excited to see where Perret will go next.