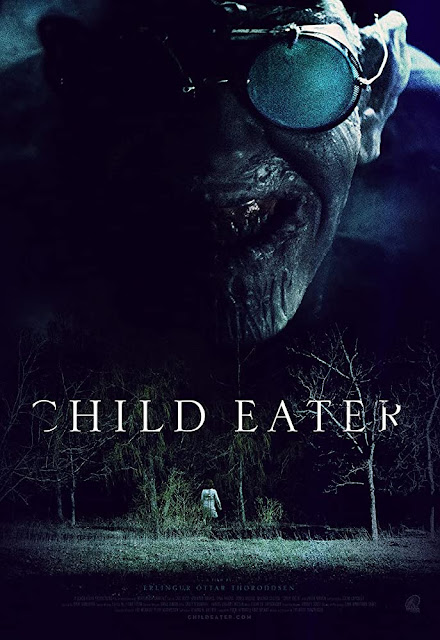 Child Eater is based on the 2012 short horror film of the same name. When I reviewed that a few years back (here) I commented that I hoped the feature length version would improve upon the lore built up in it. Like the original short, this one too is directed and written by Erlingur Thoroddsen, and this one also stars Cait Bliss who reprises her role as the babysitter, Helen.

A quarter of a century before the events of the film there was an old man named Robert Bowery who lived in the woods near a small town. This man had failing eyesight and believed by consuming the eyeballs of children he would be able to get his sight restored. After a little girl manages to escape from him he is finally caught and believed killed. In present day, Helen (Bliss) is asked by her father to babysit a young boy, Lucas (Colin Critchley). The boy complains of a monster hiding in his cupboard, Helen humours him but when she looks there is nothing there. Later that night she hears a strange noise coming from Lucas's room, she goes there to find he has vanished. She decides to head out into the nearby woods to search for him, unaware that Robert Bowery (Jason Martin - Gotham) has returned in a new supernatural form to once again kidnap children...

I assumed a feature length film would find time to build on the lore and the characters that the original short didn't have time to do. However this seemed far more content to stretch that original short into a feature length with minimal added of any consequence. After a tiny sliver of character development the film soon gets to the original place the short started. Nearly the entire movie takes place over the night Lucas vanishes, and from what my memory told me this goes along in a very similar fashion to the original. I found Lucas to be an annoying character, and there was a bit of a throwback in feel to the early 2000's in how he acts. There was a weird stretch of time in the past where it seemed children were being given scripts for adult characters. This led to child characters speaking and acting with a maturity that came across as creepy rather than realistic. Such is the case with Lucas who the film would lead you to believe is a lot more articulate, rational and intelligent than all the adults around him. This just makes for a creepy character, and so I wasn't that fussed what the titular child eater would do to him. There are a bunch of other characters but there is so little development with any of them that I couldn't care less about them. Bliss was fine as the babysitter but I didn't really understand why she felt the need to rescue Lucas after a certain point in the movie.


Much like the original the design of Robert Bowery was pretty cool. An old bald man with black steampunk goggles on, long elongated limbs, and the ability to stand so still that he fades into the background. This was all cool and  he features in some of the best moments here. His method of killing is always to start with the eyeballs and so there are plenty of moments of him viciously ripping them out. The lore again is given as exposition, including all the fluff about some sort of bird of death character. I wish there had been more flashbacks, as it is we get a little prologue set in the past, but then that era is never shown again. There was no explanation for just how Bowery was stopped the first time around, just a feeling that back then he was human, where in present day he is shown to have clear supernatural powers such as healing powers. There was a bit of a Jeepers Creepers feel to the antagonist. The special effects for the kills always looked nice and bloody, it helps that most the film takes place in the darkness. 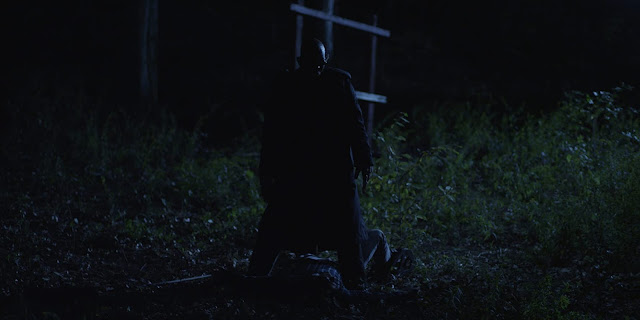 The story is one area Child Eater really needed work on. This devolves into characters running around aimlessly, and due to the lack of any kind of development I couldn't care less if they lived or died. Parts of this felt like homages to the Halloween series, such as when Helen compares Bowery to an actual monster, and a section that takes place with an injured Helen in the local hospital. I wanted to enjoy this more than I did, I thought Bowery himself was great, the film as a whole just felt so by the numbers and generic. At least it ends on a cool note, though the after credits zinger added absolutely nothing to the actual ending.

I had hoped that a feature length version of that original story would really expand on the ideas given, instead this is content to tell the exact same story, just bloated out. This badly needed some character development to make you give a damn about anyone here, but sadly that didn't happen. Child Eater is due to be released that to High Fliers Films.