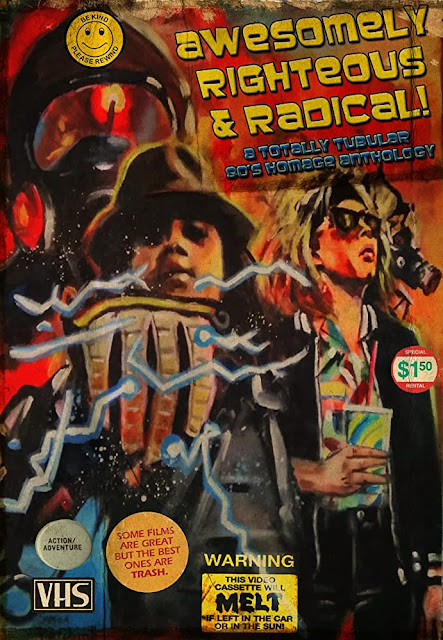 Awesomely Righteous & Radical is an eighties inspired anthology created by Shane Ryan (Autopilot, My Name is 'A' by Anonymous) that brings together an eclectic collection of short films that also includes trailers and archival footage. Many of the ten shorts are horror but being based on the eighties there are also a few more action focused ones. I say this each and every time I review an anthology but I will say it again now, I sure do love anthology films.

The whole anthology is designed to look like an old VHS tape that has had various programs recorded on it and it starts off with a warning about the dangers of crack cocaine using archival footage of Clint Eastwood. A fitting warning as many of the following shorts are very out there in terms of the vibes they create. It starts off with Swamp Buck (written and directed by Jason Ewert) that plays out like a comedy horror. An old man tells a story around a campfire about a hunting trip he went on as a child. It was a decent blend of styles whose silliness almost won me over.
Next was Shane Ryan's Guerrilla, a short which I reviewed back in 2017. This post-apocalyptic film follows a boy in an eighties America which has been contaminated with an air based virus that turns its victims hyper aggressive. The lack of dialogue and the filming techniques make this come across as a music video, especially with the intro montage of everything from that era.
Wallet is the third in the initial trilogy of horror shorts, this was directed by Luc Bernier. Here, a woman staying at a remote motel discovers a wallet full of cash. Despite it containing an address to return it to if it is found the woman decides to keep the money. This turns out to be a very bad mistake. I liked the general idea behind this one, but I didn't feel its execution worked satisfactorily as it ends on a bit of a limp note. 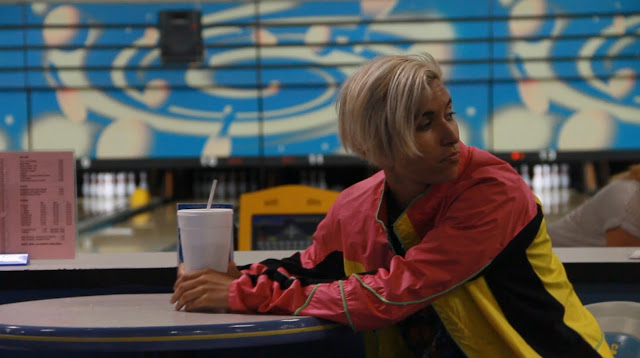 Los Angeles Connection is the first action short here. A man returns home to find his wife murdered. After a classic eighties style training montage the man sets out to get revenge against those responsible. This was directed by Dustin Ferguson and certainly looked like it had been ripped out of the time frame it was aping, but not too much of note really happens here.
Party Like It's 1984 is a comedy from Oliver Jolliffe and was in two parts. The first section has an out of shape bodyguard at a psychiatrist session where he claims to be no longer using drugs. The second part has him waking up in woodland after a drug binge and soon discovers the woman whose bodyguard he is, and a colleague. This was energetic and the characters were a likeable bunch, however it felt a bit unfocused, like the lines and story were being improvised on the spot. Regardless, it still had charm.

A return to horror next with the Jim Towns directed The Somnambulist. This had three scientists performing tests on a comatose patient (one of them played by Ryan). They are hoping to bridge the gap between the world of the living and of the dead. At the time I watched this it was my favourite of the shorts shown here due to the story that I found quite interesting and effective.
Tang Soon Do is an interlude that is a martial arts demonstration. It was full of grainy visual effects that gave it an experimental feel all of its own.
Following this is Odyssey of the Disturbed by Dean Houlihan. I couldn't follow this at all, it seemed to be a series of different stories all featuring the same characters, but with different roles in each one. These included a goth girl who seemed to be imagining these stories, along with a punk and a New Romantic. Sometimes these characters would be against each other, at other times they seemed to be friendly. The lack of dialogue as well as montages of characters hanging out made this seem like a music video. Despite not really following it I liked how it was all put together. 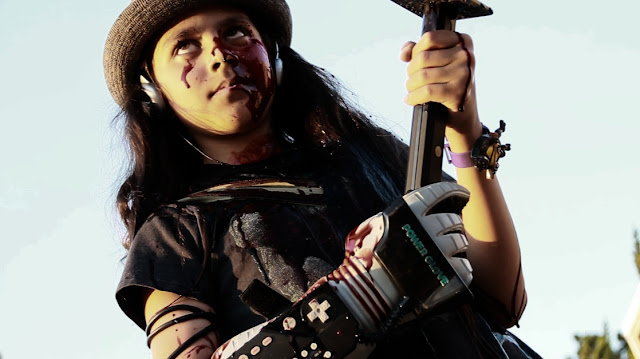 Luna Di Morte was the penultimate short and also one of the briefest. This was very art house and experimental with elements of the giallo genre to it. I can't say I really enjoyed it so wasn't too sad to see if over with.
The final short is also the best, that is Tumor Hunter, directed by Aaron Stielstra. There was a very grindhouse vibe to this one. It presented itself like a very low budget, lost eighties classic show. A man in black travels city to city in order to help people afflicted with tumours by killing them. This involves lots of fighting and shooting, including against a gang armed with chains and baseball bats. The way this was created, poor footage, bad sound and a general claustrophobic look created a nightmarish feel, I didn't feel good watching it, but it was something that really stood out in terms of the overall vision and feel to it.

I'm used to watching anthologies that are pure horror and so it was nice to see something a little different. At 1 hour 40 this featured a lot crammed into it and the often grainy footage meant at points it nearly got a little exhausting to watch. This was a decent collection of shorts, even the ones I enjoyed the least were still well made, nothing here was terrible even if I didn't really 'get' some of them. Awesomely Righteous & Radical is currently seeking distribution and comes from Mad Sin Cinema.