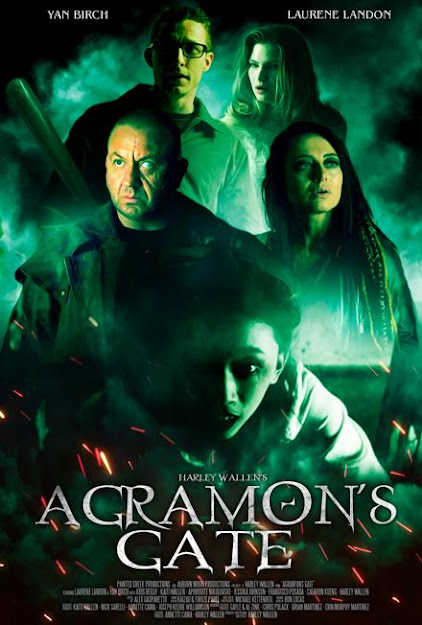 Agramon's Gate is a film about demonic possession that was written and directed by Harley Wallen, he also plays one of the main characters in it. I usually love me some demonic possession but for whatever reason I found this particular tale to be inexplicably dull.

A spirit medium, Vesna  (Aphrodite Nikolovski - Love Immortal) is invited to a party a group of friends are having, it is hoped she will bring some entertainment to the evening. Richie (Kris Reilly - Enigma) is very sceptical about her, but is shocked when while trying to contact the dead the medium appears to become possessed. As a child Richie was forced to kill his father, Carter (Yan Birch - The People Under the Stairs) who was himself attempting to kill Richie's mum. Now it appears the evil spirit of his father has returned, but Vesna's own research with her friend, Zeb (Wallen) leads them to believe that it is actually the demon, Agramon who has appeared. With all who took part in the séance at risk they must band together to try and find a way to stop this demonic evil.

Initially things looked promising, the film had barely even begun when the séance is held and the horror begins. What follows is nearly two hours of meandering and uneventful pottering around in which it felt like absolutely nothing of note was happening. I can't quite understand just what was so boring about the movie, but dull it was. This is a real shame as a lot of the other things in this film were good. Of special note were the make-up effects. Sure the demonic eyes you see looked a bit cartoon like, but the actual make-up for characters looked really good. The acting also was not bad at all, Vesna and her friends were an interesting bunch, her and Zeb in particular got a lot of screen time. Richie and his friends though were such non characters that I struggled to feel much for them. They were not nasty people, they were not nice people, they just came across as very normal and so there was a lack of personality to any of them outside of Richie and his wife.


Agramon's Gate just dragged and dragged and dragged for me, every promise of action and excitement just led to the same old scenes of characters sat around waiting for something to happen, yet things rarely do happen. There was a nice subplot about Richie's mum who went insane when he was a child, and who has been kept in an asylum ever since. Far too little screen time was dedicated to this side of the film though which was a shame, it featured some of the more interesting actors, such as Laurene Landon (Maniac Cop) who played Richie's mum, as well as Troy Randall-Kilpatrick in a memorable, yet short role as Detective Blackwell. I struggled to pay attention to a lot of the main plot which did just seem like characters sat around waiting for the demon to finally appear. Things looked up when it finally does get to the finale, yet bizarrely, despite the whole film leading up to this moment nothing much really happens at this critical point. It cuts to credits with the story in full swing, nothing resolved, and me feeling quite frustrated I had sat through near two hours of fluff to get no pay-off for the story being told.

The horror here was slight enough to have me wondering to myself at times if this was what demonic possession might seem like in real life. There are a few scenes of Richie following what he believes to be the ghost of his father, some poltergeist activity at the films start, and plenty of moments with a young woman (Calhoun Koenig) who seemed to be the true form of Agramon. Again, the make-up was good for her but it was all bark and no bite. Despite it being claimed Agramon was one of the most fearsome demons of Hell it doesn't actually do too much. A small body count is better than none, but I never felt any of the many leads were in any sort of peril.

I went into this film expecting to be entertained. This is filmed well, has some decent performances, some great make-up and sound. Even with all so much going right for this it was let down by a weirdly drawn out and suspense-less plot that prioritised filler over the more interesting sub-plots. Agramon's Gate premiered on Terror TV.